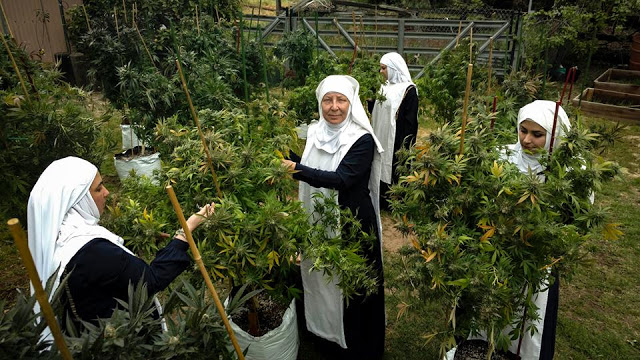 Dressed in blue and white habits, the Sisters of the Valley look like any normal group of nuns.

They live a modest life on a farm in Merced, in the Central Valley of California, where their acres of greenery match the other properties surrounding them.

But this is not your average religious group. This commune of women live at a cannabis convent, with marijuana plants growing in a glowing garage nestled on the tranquil property.

The self-proclaimed “weed nuns” don’t consider themselves holy rollers, in fact, they have no religious ties at all. But they are on a mission to empower people to heal themselves using their cannabis products.

According to the Sisters of the Valley website, they prepare marijuana-infused oils and medicines and sell them online.

Their main customers are Canada, Australia and England and last year alone the nuns made $750,000 by selling their marijuana remedies.

The weed nuns say they make their products in a spiritual environment and prepare medications during moon cycles.

“People all around the world are discovering amazing benefits of CBD (cannabidiol),” the website says. 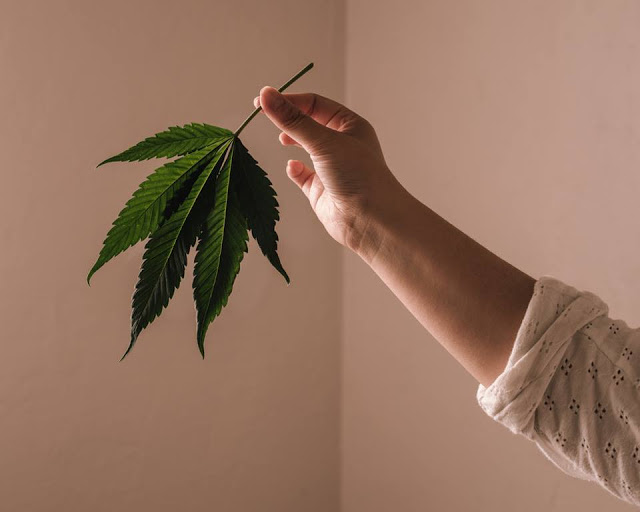 The CBD-infused oil is taken like a tincture, dropped on or under the tongue, made with plant material and liquid coconut oil.

The convent’s leader Christine Meeusen, also known as Sister Kate, told Fairfax Media after growing the marijuana, they dry it and cook it in coconut oil.

They then strain the plant and add essential oils and beeswax before jarring it to ship to customers.

It’s a controversial practice but Sister Kate said their mission is mostly supported.

“We’ve gotten a few hate calls but by and far the Catholics understand what we’re doing,” she told Fairfax Media.

“The minute they look beneath the surface and see we are dealing with cancer patients and are serious women on a serious mission, they don’t really hold any grudge against us.”

The Sisters of the Valley will now be the subject of a new documentary, Breaking Habits, focusing on their lives in the quirky commune.

The sisters’ healing business is still technically illegal and most of California’s marijuana is grown in the Emerald Triangle, a region in Northern California which includes Mendocino County, Humboldt Country and Trinity County.

While marijuana is legalised in California, it is still illegal at a federal level.

The Orange Country Register reports people in possession of marijuana can still be prosecuted by federal authorities.

However, the weed nuns have not been stopped but Sister Kate told Refinery 29 local authorities were watching them closely.

“They’re watching us. And I know that if we would give them a reason, they would shut us down,” she said.

Because of the profit of their crop, Sister Kate said they had to spend a lot of their earnings on security.

“Our plan is to have round the clock security until we feel safe: guns, gates, fences — but none of that thrills me,” she told Refinery 29.

The nuns’ customers have raved about the success of their cannabis products in healing their injuries.

One woman who broke her back two years ago wrote on Facebook the salve, an ointment with cannabidiol, was a “godsend”.

“My husband has used it on my lower back for a year. It soothes the ache and allowed me to sleep through the night. I have begun using CBD infused oil under my tongue whenever the twinges start. It calms it right down. If not for these products, I’d still be in severe pain,” the customer wrote.

Sister Kate told KFSN-TV they consider themselves nuns because they are there to heal the sick.

7 thoughts on “Meet the Reverend Sisters growing and selling weed”

We told you eba and egusi can do wonders...

Sun Apr 30 , 2017
by Gloria Ezeh Remember when we made this post and you guys did not take us serious? Now Nigerian-bred world heavyweight champion Anthony Joshua has revealed the secret to his success as eba and egusi. “My heart is with Nigeria, my heart is with Britain, I’m a Nigerian by blood, […] 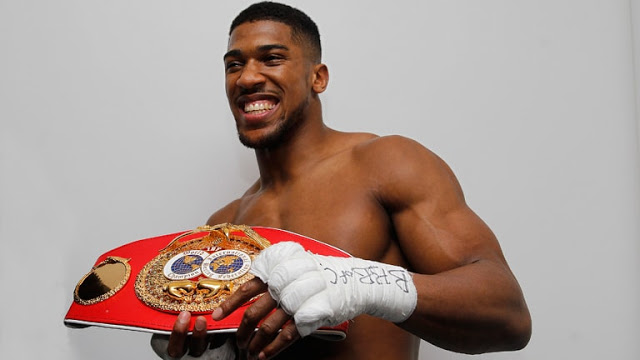