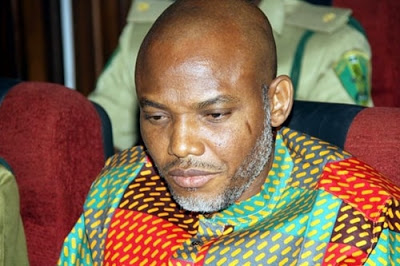 Nnamdi Kanu, leading member of one of several Biafran separatist organizations, the Indigenous People of Biafra (IPOB), and the director of London-based radio station Radio Biafra was arrested last year — precisely on the 14th day of October, 2015 by the President Muhammadu Buhari-led administration over charges of “criminal conspiracy, intimidation and membership of an illegal organisation.”

Mr Kanu has been held in prison since then despite various court orders that ruled for his release.

A Federal High Court in Abuja ruled on Tuesday on an application seeking the protection of witnesses in the ongoing trial of Mr. Kanu and three others.

Delivering the ruling, Mrs. Binta said the court would allow the witnesses some degree of protection.

“The counsels and the defendants will see the witnesses. The witnesses will have special entrances to and outside the court,” the judge said.

After the ruling was given, Mr. Kanu said he would not allow himself to be given a secret trial in any way.

The leader of the Indigenous People of Biafra (IPOB), Nnamdi Kanu, has accused President Muhammadu Buhari of lying, saying the president cannot intimidate him.

At a stormy court session on Tuesday, Mr. Kanu said the president can intimidate court judges, but not him.

“The president can intimidate the judges, but he cannot do that to me. Tell him he has lied,” said Mr. Kanu.

Raising his voice, Mr. Kanu said anything short of a public trial would not be allowed.

“I won’t stand this travesty of justice. Buhari spoke in public, he accused me in public. I must also be allowed to stand my trial in public,” Kanu bellowed from the dock.

Mr. Kanu’s lawyer, Chux Muoma, warned his client to allow the counsel he employed to do his job without undue interference in court.

“Sit down! I am your counsel let me talk. I have not come all the way here to allow you speak for me in court,” said Mr. Muoma.

He apologised to the court afterwards. Counsel to the other defendants said they would make a formal application against the judgement. They said they were opposed to the ruling of the court.

Shortly after, the defendants began to clamour for an opportunity to speak to their lawyers.

The judge, Mrs. Nyako, warned the defendants to desist from making her court rowdy.

The judge said her ruling did not imply that the trial will be conducted in secret.

The defendants challenged this position again.

“If you don’t stop talking in my court I will assume you are becoming a nuisance in my court,” the judge warned.

“And if I assume so, I will continue this trial in your absence, so do not try my patience,” she said.

“When you are in my court you will do what I want. It’s like having a visitor in your house; you can serve the visitor food but if he wants to eat he will eat and if he doesn’t want to, he will not.”

After a brief recess, Mr. Kanu began to speak again.

“I will address this court! You cannot be killing my people and tell me that you will make me have a secret trial. That won’t happen! The president can intimidate the judges, but he cannot do that to me. Tell him he has lied,” said Mr. Kanu.

The other defendants soon joined in the voice of opposition against the court’s ruling and the session became rowdy.

Kanu was previously facing a six-count treason charge with Madubugwu and Nwawuisi, before FG amended the charges to include Onwudiwe as one of the defendants.

Justice Nyako is now the third judge to handle the trial.

It will be recalled that the former judge handling the matter, Justice John Tsoho had on September 26, disqualified himself from presiding over trial of the defendants.