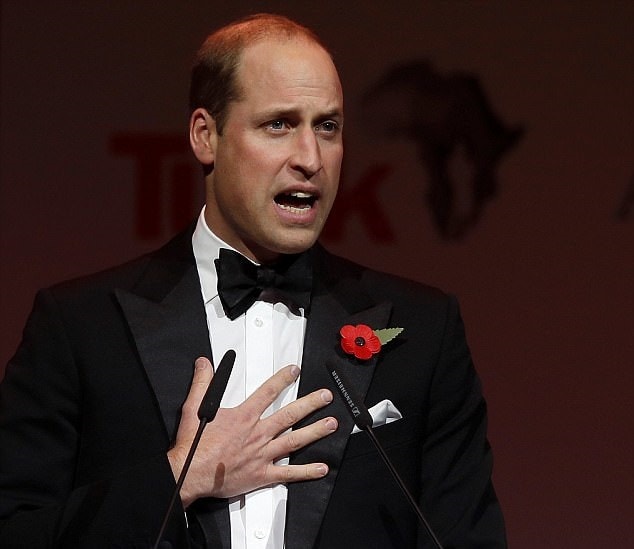 Just months before the birth of his third child, Duke of Cambridge, Prince William, warned of the dangers of overpopulation.


While giving a speech at Tusk gala dinner in London November last year, the elder son of the heir apparent to the British throne, warned that the future of wildlife and other natural resources is under threat from rapid human population growth, especially as seen in Africa.

‘In my lifetime, we have seen global wildlife populations decline by over half,’ the 35-year-old prince said.

‘We are going to have to work much harder and think much deeper, if we are to ensure that human beings and the other species of animal with which we share this planet can continue to co-exist!’

According to the prince, Africa’s rapidly growing human population is predicted to more than double by 2050, a staggering increase of three and a half million people per month.

‘There is no question that this increase puts wildlife and habitat under enormous pressure. Urbanisation, infrastructure development, cultivation—all good things in themselves, but they will have a terrible impact unless we begin to plan and to take measures now.’

William’s father Prince Charles previously spoke out about his concerns over population growth in a 2010 speech at the Oxford Centre for Islamic Studies, warning that the world faces ‘monumental’ problems as populations rocket.

Prince William also cautioned that earth does not have the capacity to ‘sustain us all’, while a ‘vast proportion’ is consuming natural resources at ‘Western levels’.

‘It would certainly help if the acceleration slowed down, but it would also help if the world reduced its desire to consume,’ he said.

‘The food prices are going up – everyone thinks it’s to do with not enough food, but it’s really that demand is too great, too many people.’

‘It’s a little embarrassing for everybody, no one quite knows how to handle it. Nobody wants their family life to be interfered with by the government.’