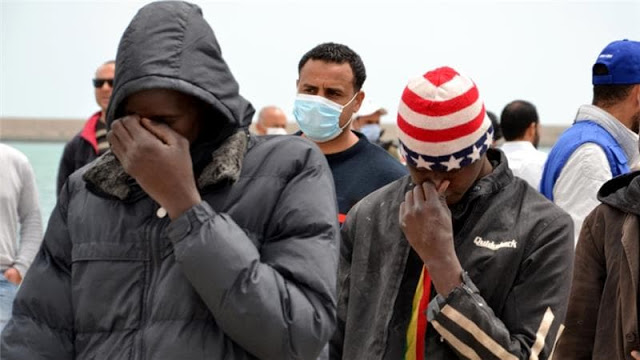 Selling of people is rife in African nation Libya that has slid into violent chaos since the overthrow of Gaddafi, UN migration agency reports.

West African migrants are being bought and sold openly in modern-day slave markets in Libya. Many survivors narrate their ordeal to a UN agency helping them to return home.

But the new testimony from the International Organization for Migration suggests that the trade in human beings has become so normalized that people are being traded in public.

“The latest reports of ‘slave markets’ for migrants can be added to a long list of outrages [in Libya],” said Mohammed Abdiker, IOM’s head of operation and emergencies.

“The situation is dire. The more IOM engages inside Libya, the more we learn that it is a vale of tears for all too many migrants.”

The north African nation is a major exit point for refugees from Africa trying to take boats to Europe. But since the overthrow of autocratic leader Muammar Gaddafi, the vast, sparsely populated country has slid into violent chaos and migrants with little cash and usually no papers are particularly vulnerable.

One 34-year-old survivor from Senegal said he was taken to a dusty lot in the south Libyan city of Sabha after crossing the desert from Niger in a bus organised by people smugglers.

The group had paid to be taken to the coast, where they planned to risk a boat trip to Europe, but their driver suddenly said middlemen had not passed on his fees and put his passengers up for sale.

“The men on the pick-up were brought to a square, or parking lot, where a kind of slave trade was happening. There were locals – he described them as Arabs – buying sub-Saharan migrants,” said Livia Manante, an IOM officer based in Niger who helps people wanting to return home.

She interviewed the survivor after he escaped from Libya earlier this month and said accounts of slave markets were confirmed by other migrants she spoke to in Niger and some who had been interviewed by colleagues in Europe.

“Several other migrants confirmed his story, independently describing kinds of slave markets as well as kinds of private prisons all over in Libya,” Manente said.

“IOM Italy has confirmed that this story is similar to many stories reported by migrants and collected at landing points in southern Italy, including the slave market reports. This gives more evidence that the stories reported are true, as the stories of those who managed to cross-match those who are returning back to their countries.”

After his sale, the Senegalese migrant was taken to a makeshift prison of a kind that has been well documented in Libya. Those held inside are forced to work without pay, or on meagre rations, and their captors regularly call family at home demanding a ransom. His captors asked for 300,000 west African francs (about £380), then sold him on to a larger jail where the demand doubled without explanation.

Men who lingered there too long without the ransom being paid were taken away and killed, he said. Some wasted away on meagre rations in unsanitary conditions, dying of hunger and disease, but overall numbers never fell.

“If the number of migrants goes down, because of death or someone is ransomed, the kidnappers just go to the market and buy one,” Manente said.

His terrified family began scraping together loans. As he spoke fluent English, French and some local languages, he translated for his jailers to win time for relatives to collect the money.

“Its very clear they see themselves as being treated as slaves,” he said.

Loprete’s office has arranged for the repatriation of 1,500 people in the first three months of this year – almost the same number as in the whole of 2015.

He fears more horrors are likely to emerge.

“There are now more migrants coming back from Libya, so that’s also why all these stories are coming to the surface,” he said. “And conditions are worsening in Libya so I think we can also expect more in the coming months.”

Even growing international awareness of the problems migrants face is being exploited. IOM has had credible reports of criminals posing as aid groups that help migrants to lure in people who have escaped or bought their freedom and want to return home.

The organisation is working to spread awareness across west Africa of the horrors of the journey through the personal stories of those who return. Though most migrants know the boat trips to Europe are extremely risky, fewer realise they may face even worse dangers in Libya before even reaching the coast.


“Too often they are broken, brutalised and have been abused. Their voices carry more weight than anyone else’s.”