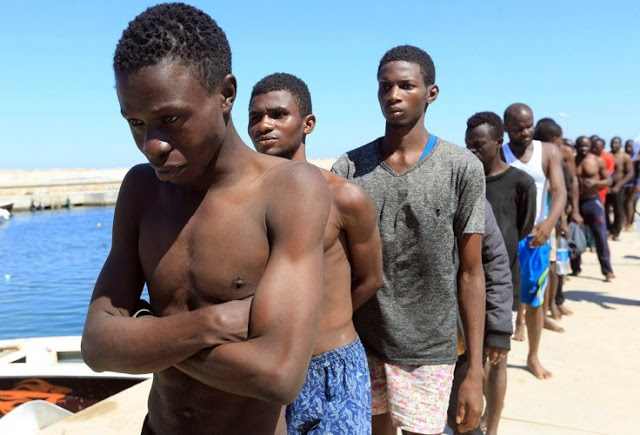 Black Africans are being sold in open-air slave markets in Libya, and it’s Hillary Clinton’s fault. But you won’t hear much about that from the news media or the foreign-policy pundits, so let me explain.

Footage from Libya, released recently by CNN, showed young men from sub-Saharan Africa being auctioned off as farm workers in slave markets.

And how did we get to this point? As the BBC reported back in May, “Libya has been beset by chaos since NATO-backed forces overthrew long-serving ruler Col. Moammar Gadhafi in October 2011.”

And who was behind that overthrow? None other than then-Secretary of State Hillary Clinton.

Under President George W. Bush in 2003, the United States negotiated an agreement with Libyan strongman Gadhafi. The deal: He would give up his weapons of mass destruction peacefully, and we wouldn’t try to depose him.

That seemed a good deal at the time, but the Obama administration didn’t stick to it. Instead, in an operation spearheaded by Clinton, the United States went ahead and toppled him anyway.

The overthrow turned out to be a debacle. Libya exploded into chaos and civil war, and refugees flooded Europe, destabilizing governments there. But at the time, Clinton thought it was a great triumph — “We came, we saw, he died,” she joked about Gadhafi’s overthrow — and adviser Sidney Blumenthal encouraged her to tout her “successful strategy” as evidence of her fitness for the highest office in the land.

It’s surprising the extent to which Clinton has gotten a pass for this debacle, which represents a humanitarian and strategic failure of the first order. (And, of course, the damage is still compounding: How likely is North Korea’s Kim Jong Un to give up his nuclear weapons after seeing the worthlessness of U.S. promises to Gadhafi?)

Back during his brief stint in the Democratic primary, former senator James Webb raised the issue, saying America “blew the lid off of a series of tribal engagements. You can’t get to the Tripoli airport right now, much less Benghazi.” But as the Libya disaster continues to unfold, Clinton’s role in it gets surprisingly little attention.

Maybe it’s buried under the other Clinton/Obama debacles in the Middle East, such as the botched Syrian policy that The Washington Post’s Fred Hiatt called ”a humanitarian and cultural disaster of epochal proportions.” Remember President Obama’s “red line” that Syria crossed, and that Obama didn’t enforce?

That led to a destabilizing flood of refugees hitting Europe, too.

And, of course, there’s the Yemen policy, which Obama bragged about as a model for the war on terror. But now Yemen is another war-wracked humanitarian and strategic disaster.

Still, Libya is in a class of its own. In Syria and Yemen, at least, the situation was already bad. Libya, before Clinton got involved, was comparatively stable and no strategic threat to the United States or its allies. Now it’s a shambles, with people literally being sold in slave markets.

Back in the 2012 presidential campaign, Vice President Biden told a group of African Americans that the GOP was going to “put you all back in chains.” But it turned out that it was Clinton’s policies that led to black people being sold. As some ponder another Hillary Clinton run in 2020, that’s worth pointing out.

This article written by Glenn Harlan Reynolds, a University of Tennessee law professor and author, first appeared on USA Today.