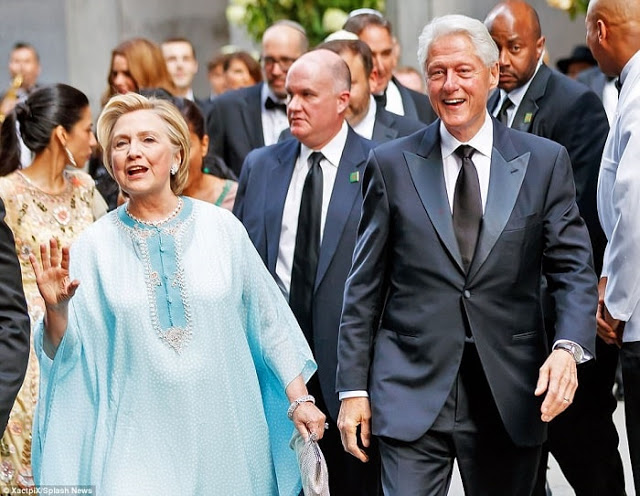 Hillary and Bill Clinton attended the wedding of a hedge-fund billionaire’s daughter – the same businessman who was one of Hillary’s biggest financial supporters during her election campaign.

The former President and First Lady were all smiles while at the wedding of 24-year-old Sophie Lasry, the daughter of Avenue Capital Group founder Marc Lasry, on Sunday night.

Lasry married Alexander Swieca, a 25-year-old former University of Michigan quarterback, who is the son of another billionaire hedge fund manager, Henry Swieca.

Hillary in a flowing turquoise blue agbada-like gown was snapped with
Bill wishing the bride and her groom well as they posed for photos with
guests at the opulent wedding hosted at Cipriani Wall Street in New York
City.

At a time when African fashion designs are receiving wider international appreciation, this is obviously another good delight for indigenous labels.

One Comment on “Hillary Clinton looks gorgeous in ‘agbada’”