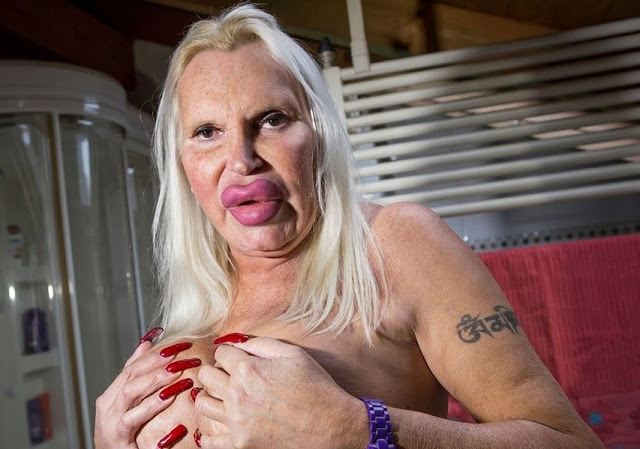 46-year-old Kelly Star, from Perth, Australia, transitioned into a woman 30 years ago and has since spent about £180K on surgery to become ‘the perfect woman.’

Kelly who revealed she has spent over £100,000 on 19 breast operations alone says she is still struggling to make men see her as more than just a fling.

“For most guys, being with a trans-woman might be something they’re intrigued by and they just want to be with once, which is disheartening,” Kelly said.

Kelly revealed she has been single for more than 12 years after her last relationship ended in 2005.

Since transitioning 30 years ago Kelly has undergone 127 operations to change her appearance, including 19 operations on her breasts, enlarging them from cup size 32C to a 32K.

Although she is still struggling to find the love of her life, the 46-year-old says her curvaceous figure- which she has modeled from the likes of Elle MacPherson and Gisele Bundchen- means she is never short of male attention.

“It’s hard to find a man who is willing to tell their mates and family that they have a trans-partner, and I think that’s the last barrier to trans-women being accepted,” Kelly said.

“I think it takes a very strong man to openly date a trans-woman, because they do get a lot of stick from others, and I think that comes from the way we have been presented in the media.

Kelly’s says her ex-partner’s family only discovered she was a trans-woman when the couple broke up.

“At the time, I think I was happy not to have to explain my past and enjoyed the experience, to an extent. It’s what I thought I wanted.

“But in time I grew more confident in myself and realised that it wasn’t an ideal situation worrying about who might reveal my past or who may already know.

“In essence, I felt repressed.”