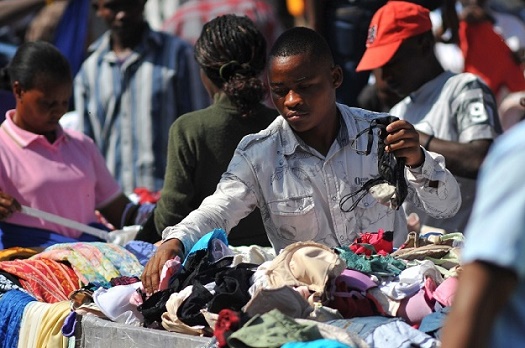 Ahanna told him his rent has expired.

He did not allow his shock to settle on him before he continued.

He told him he needed someone to stay with, someone hardworking and trustworthy, someone like him, so that they could work hard together and pay the rent, since the landlord had been kind enough to give him a 3-month grace.

‘Nwanne, this town is haaard!’ Ahanna said to him. ‘Very haaard.’

At first, Obinna thought nothing. His mind was blank.

Then anger surged through him. His skin became warm.

But he knew not who he was really angry with: Ahanna, for deceiving him; Lagos, for being so haaard to live in, or the landlord, for asking people to pay rent in a house without soak away.

He imagined him a short man in a long native attire and red cap shouting at his tenants, threatening to throw their things out if they didn’t pay their rent after a week.

That man was Deh Okolo in his village. One day, one of the tenants he was screaming at had beaten him to pulp, packed his things and left the same day.

His heart lightened a little now. He thought, at least, that Lagos landlords were different. It appeared they did not shout, the way Ahanna had said ‘he was kind enough to…’

And the man had really been kind to give a 3-month grace. Deh Okolo gave one week, yet with persistent shouting.

After the long speech, the truth, Ahanna finally gave him a chance to ask a question.

Before he could say a thing, he went on to add, ‘Nwanne, don’t be too worried, everything will be fine’, as if to ensure he did not get violent and beat him up.

But he did not. He only nodded and his chest rose and fell in a deep sigh.

He already knew what that last statement was – consolation.

And he hated to be consoled. People saying sorry to him when he is injured, telling him not to worry when he is sad.

The day his father died, he’d gone to the back of the house to join the boys digging the grave.

He preferred to join them than stay with his mother in the front yard where the people that trooped in donated pity to them in large bundles.

But the boys had asked him to go back, to leave the job to them.

He picked his ete and machete and started down their farm. He knew none of their palm trees had ripe fruits—he’d cut them all—but he would climb one, the tallest one, and cut down a few fronds for the goats.

People saw him and were screaming, thinking he was going to kill himself. Boys finally ran after him and overpowered him. They carried him back home.

That was when he began to cry, telling them to give him back his ete and machete, to allow him, that he was only going to cut some fronds.

‘Do you have any plans?’ he finally asked Ahanna.

Ahanna tilted his head to stare at him.

Then his lips quivered and broad smile came over his face.

He stretched his hand and Obinna grabbed it in an energetic handshake.

Ahanna took him to his shop when it was full morning.

He had expected to see a shop when Ahanna had said shop, but when they got to Oshodi, busy and bustling like it was the only market in Nigeria, what he saw was only a space, as small as where Mama Amaka would display her awalawa peppers and tomatoes at the Nkwo.

Ahanna greeted the other cloth sellers. They called him Papilo too and he shook hands with most of them, introducing him to anyone that bothered to ask as his brother.

He asked him to wait at the space so he could go and bring his wares.

He returned with a large bag. He helped him put it down.

Ahanna spread a broad sheet made by joining sacks together on the ground. After he set up the clothes, a huge pile of shirts, skirts, trousers, bras and pants, he joined the others in chanting, ‘Come and buy!’

He rang his bell. ‘It has fallen!’

Obinna observed him for a while before joining in the sales, calling of customers, convincing them to buy and packaging what they’d bought for them.

At the end of the day when they got home, Ahanna was amazed when he counted the cash.

He re-counted the bundle of notes again, giggling as he lifted one weak note after another, wetting his fingers occasionally with the tip of his tongue.

‘Nnaa, mehn! We sold today o!’ he shook Obinna’s hand in a way he thought was a bit too violent.

He smiled. He was happy that Ahanna was happy.

Afterwards, he asked him how he always managed to convince people to buy, especially when he was sure he never saw him join in the shouting and chanting.

But each time he looked, he would see that he was speaking with a customer who appeared obedient and listening.

Even though he knew what he did, he did not know how to explain it to Ahanna. It was the method he used at the Nkwo, when he stood with other barrow boys and instead of joining them to reach out and call customers, he would be quiet.

He would then pick a face, and with his eyes and well-timed smile he would beckon the person to come. And most times, the person would come, and would eventually hire him.

He had applied the same technique in Oshodi and it appeared to have worked just fine.

People are the same everywhere, he realized. You have to give attention to get attention.

Later that night, because he was happy, Ahanna took him to Madam Golden.

She was Igbo and made Igbo dishes; oha, egwusi and onubu.

He ate onubu with fufu. Though he complained that the onubu leaves were too stalky and over-washed, but he preferred it to the ewa goyin and Agege bread he took in the noon hours.

When Ahanna had beckoned the woman with her pot and oil container in a tray on her head, he’d thought it was fio-fio.

He liked the bread though. It was soft and stretchy—near-elastic—and surprisingly cheap.

But he didn’t like the mashed beans with the palm-oil sauce. It nearly nauseated him and he dropped it aside and ate only the bread. He was surprised at how Ahanna enjoyed the meal and had to even order for extra beans.

Sales were good the next day too and the days that followed.

One evening, they were munching on hot akara and Agege bread when Ahanna laughed and told him that it was like Ore is buying his market.

His teeth got trapped in the bread. ‘Ore?’

‘Yes.’ Ahanna bit off a chunk of bread and threw a ball of akara into his mouth. ‘You should be careful though,’ he said, his voice now distorted by chewing. ‘You know she is a Yoruba girl.’

How could he even be saying stupid things like that when he knows that he is a married man?

He touched the necklace on his neck now and drew in a deep breath. He started on his food again.

For all he knows, he has no idea of what Ahanna is talking about.

He is the one that even noticed the poor girl is buying his market in the first place. As if he had anything on sale.

Though he couldn’t swear he hadn’t thought about it once; the stares, the smiles, and the quiet way she said ‘Obinna, good morning’, each morning they saw each other.

He only began to worry when the food presents started. The first real discussion they had was on a Sunday morning when she asked him what his favourite food was.

He was near the narrow gutter at the edge of the compound, washing his singlet when she came close.

A small tray of beans was in her hands. She was picking out the chaff.

‘Obinna, can I ask you a question?’ she said.

He looked up at her. She was wearing a short gown and her yellow skin shone in the calm sun.

He had a razor mark below his belly too, but it was from the treatment of a stomach ailment he had when he was small.

‘Food I like well,’ he repeated, eyes turned up in thought.

‘Yes, favourite food for you.’

She shook her head.

‘Ukwa is Igbo food. We cook it with corn and dry fish.’

She shook her tray slightly and blew off chaff. ‘So you don’t like rice.’

‘Everybody eats rice. It’s not a special food.’

He was surprised her English was good, better than what he’d expected.

He regretted having asked. He was still battling with what next to say when she said, ‘Oh you mean if I go to university?’

‘No, but I have WAEC. And I do part-time program at Yabatech.’

‘I work at Regis Media. Receptionist.’

‘That is very good.’

‘Yes. I was working with Apex before but I left. This place I’m working now is better.’

He nodded, and as if to please her, caused himself to feel more respect for her, because he now knows she is a student at Yabatech and has worked two jobs.

He imagined Regis Media now, a small print house in Ilupeju, a mighty company where not everybody could get employed in.

She was leaving when, suddenly, she turned back to him. ‘You eat rice at all?’

Later that evening, she brought them rice, beans and fried plantain.

He thanked her, but did not eat the stew because there was too much pepper in it. He watched Ahanna devour the meal.

Again, he feared one day he’d become what Ahanna now is, Lagos would turn him into it too, a voracious omnivorous monster.

Two days after, Ore brought them moi-moi made with whole eggs, her first food he truly enjoyed.

‘Nice girl,’ he said to Ahanna as they ate.

Ahanna nodded, but he could not say if the head movement was to agree to his remark or simply another indication of his savouring of the meal.

He was humming and his eyes were narrowed.

‘So this is how she always brings food for you?’ Obinna asked.

Now Ahanna drank some water. ‘Nwanne, no o. In fact, this started when you came. I told you, she is really liking you.’

Obinna suddenly felt his tummy full. It was like the chewed moi-moi in his belly had suddenly turned into something else, something heavier.

He began to suspect Ahanna might be in league with the girl on whatever mission she was on when he began excusing himself.

He would leave the room for them and go outside.

At first, they appeared to have a lot to talk about, exchanging tribal stories.

He told her the story of a bad man in his village who had killed his brother and gone ahead to swear the iyi, thinking his counteractive medicine would protect him. ‘He die after four months from ibi, swelling of scrotum.’

‘Ogun is sharp sharp. If not gun, machete or accident.’

He shook his head, amazed.

He shook his head again. But one day, they seem to run out of talk and she touched him.