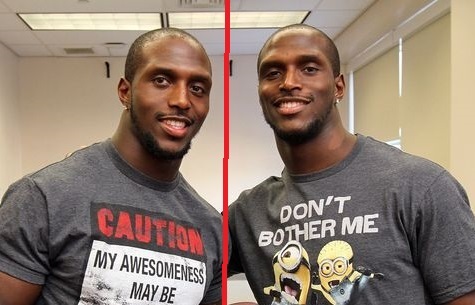 Kaire was already used to being referred to by the name ‘Chima’.

But his name wasn’t Chima; people get to see him and call him Chima, probably mistaking him for someone else.

On this particular day, Kaire was returning from lectures.

As he walked to the bus-stand, his mind bore only one wish.

He wished that he had a car, so that he could drive back to his hostel. He was getting fried in the scorching sun.

As he got closer to the bus-stand, he heard someone scream his name, ‘Kaire! Kaire!’

Almost on the edge of fury, he looked back to see who it was. Spending a minute longer in the furious sun was the last thing he wanted.

He saw and recognized the girl who had called him; it was his course-mate, Chioma.

Chioma was one of the many girls who admired him. On different occasions, she had asked Kaire out, but Kaire always told her that he wasn’t interested in dating any girl as an undergraduate.

He didn’t want any distraction. His dream was to graduate with a first class.

But Chioma was never deterred by Kaire’s excuses. She persisted and never failed to call Kaire “my love” each time she bumped into him.

‘Chioma, what is it?’ Kaire asked. ‘Your face looks as if you have seen a ghost.’

‘Was it not you that I just saw now at Madonna Cuisine?’ Chioma asked. ‘I was calling you and you ignored me. Just because of those ugly girls you were with abi?’

Chioma wasn’t smiling at all.

Surprise fell on Kaire’s face. ‘I have not gone to Madonna Cuisine for two weeks now, Chioma,’ he said. ‘You know I’m broke so there’s no way it could have been me that you saw at Madonna.’

‘Kaire, I’m not stupid, ok. When I even came to meet you, you simply said, “Sorry, I am not Kaire, my name is Chima”. Thanks for embarrassing me in front of those ugly girls.’

Chioma’s hands were on her hips like a sales-starved market woman at Eke-Ogbu.

Kaire was quiet, just staring. He didn’t mind that he was being ‘fried’ by the sun now.

‘Chioma, this is not the first time I’d be having a situation like this,’ he said finally. ‘On many occasions, people have stopped me on the road to say they’d seen someone like me somewhere around campus.’

‘I’m telling you the truth.’

‘Ha, this is serious o,’ Chioma said. ‘The guy I saw looked exactly like you. If you
think I am lying, follow me, let’s go to Madonna Cuisine now. I am sure the guy will still be there.’

He adjusted his blue jean trousers and they walked off.

They walked fast because they didn’t want to arrive at Madonna and find that the ‘Kaire look-alike’ had left the place.

Kaire has longed to see this mystery of double identity solved.

He was tired of people telling him they’d seen him at places; places he never would have ordinarily been.

Kaire and Chioma stepped into Madonna Cuisine, scanning round the place like police officers on a desperate arrest mission.

They looked round all corners of the restaurant, but couldn’t find anyone who looked like Kaire.

‘My love, I am sorry,’ Chioma said, lines on her forehead. ‘I swear I saw him, he had your face. He looked exactly like you. My love, you must believe me, I have not lied.’

‘I am not your love, stop calling me your love,’ Kaire said. ‘Come, let’s leave this place biko.’

‘You just said it again!’

They surrounded Kaire and pointed guns at him.

Out of fear, everyone scurried away from the restaurant, including the serving boys and girls.

‘Kneel down, you bastard!’ one of the boys shouted at Kaire.

‘Please, what have I done?’ Kaire was shaking as he dropped to the floor.

‘Guys, what has he done?’ Chioma asked them.

She was the only one brave enough to stay. ‘Why are you guys pointing guns at him? What kind of intimidation is this?’

Chioma lowered to the ground beside Kaire, holding her slapped cheek.

‘Please, what have I done?’ Kaire cried. ‘If it is money you want, I have my school fees in my pocket. I can give it to you guys, everything, but
please just allow us go.’

‘Chima!’ one of the boys called. ‘Chima the Bull! Your journey ends here!’

‘Please! He’s not Chima!’ Chioma screamed. ‘You guys are mistaking him for someone else!’

Just then, a terrible crash was heard.

Kaire fell to the ground, blood spurting out of his chest.

People started rushing back into the restaurant.

Just then, Chima crept out from behind a corner where he’d been hiding.

He looked exactly like Kaire: his height, his face, just him.

Chioma flew up to him and seized his shirt. ‘You are a cultist! It is you those boys came for and now they’ve shot the wrong person!’

Someone had volunteered a car and Kaire was carried into it.

‘If anything happens to him, I’ll kill you myself!’ Chioma finally let go of Chima’s shirt and ran to the car.

‘An hour later at the school clinic, a slim doctor walked out of the emergency room.

Chioma rushed to him, eyes wide from anxiety. ‘Doctor, how is he?’

The doctor shook his head. ‘I’m sorry, we lost him.’