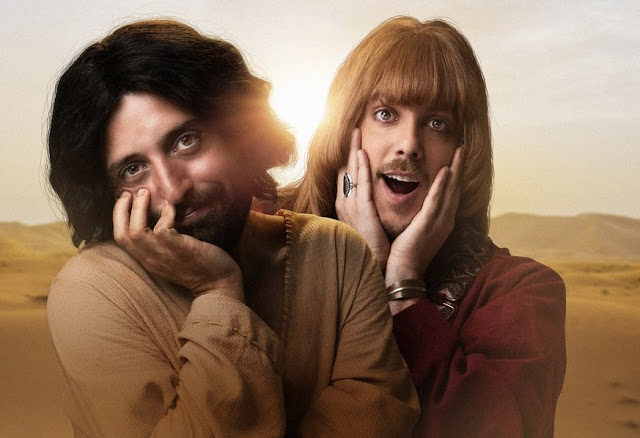 A short Christmas film released by Brazil-based YouTube comedy group, Porta dos Fundos, has been generating a lot of controversy since it appeared on Netflix.


The 46-minute film which was released on Netflix on December 3 depicts Jesus Christ as a gay man.

Jesus Christ is the Son of God, according to the teachings of the Christian religion.

In the movie, titled “The First Temptation of Christ”, Jesus was depicted as a closet homosexual who arrives at the house of Mary and Joseph with a friend named Orlando.

Mary and Joseph have thrown a birthday party for their son, Jesus, who just turned 30. As the film progresses, Jesus attempts to downplay his relationship with Orlando, who constantly hints that they’re more than just friends.

As of Monday morning, 1.5 million people have signed a petition calling on Netflix to do something about the 46-minute holiday special.

Responding to the controversy, makers of the film said it’s just satire.

“Porta dos Fundos values artistic freedom and humor through satire on the most diverse cultural themes of our society and believes that freedom of expression is an essential construction for a democratic country.”

The First Temptation of Christ is not Porta dos Fundos’ first religious satire.

The group earlier released “The Last Hangover”, which shows Jesus missing after having so much wine during the Last Supper and his disciples looking for him in the morning.

In Nigeria, the push for the ban of the Netflix’s ‘gay Jesus’ film is not as widespread.

A Nigerian preacher called Apostle Suleman made a tweet asking worshippers to delete Netflix from their devices.

This command was met with mixed reactions, with many saying they won’t be deleting the app.

Will Netflix take down the ‘gay Jesus’ film

Likely not. The outlet already reports that the comedy group Porta dos Fundos is responsible for the special.

And as the company is not even remotely homophobic, there is every indication the film will continue showing on Netflix.
Share this post with your friends: