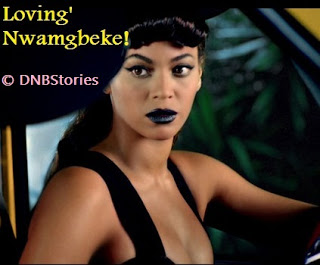 She tried to pull him up. ‘Ikechukwu, I soly na, prease licing up. Please, I not knows you is there. Ikechukwu! Ikechukwu!’

Ikechukwu remained still on the floor.

Ikechukwu opened his eyes. ‘Hey, shut up, which neighbours are you calling?’

Nwamgbeke quickly wiped at her eyes. ‘Ikechukwu! Ikechukwu, you are alife?’

‘The knife is in my intestine,’ Ikechukwu said.

‘Intestine! You will pull out slowly.’

Nwamgbeke gave an eager nod. ‘Okay, okay. So I hold it and just pull it now.’ Nwamgbeke was reaching underneath Ikechukwu’s belly.

Ikechukwu slapped her hand away. ‘Wait.’

‘Yes, wait,’ Ikechukwu said. He stirred a little and let out a deep groan.

Interest flickered in Ikechukwu’s eyes. ‘Eh, you will kill yourself if I die?’

‘Ha, you asking? It not better I kill my self myself than Florence kill me? You talk as you not know your sister; she not only kill me, she pieces me. Pieces me like ngwogwo.’

‘Leave Florence, what of your bags?’

‘The bags you packed, are you still leaving or not?’

‘Hia. I mally ghost before?’

Ikechukwu stared at her, and then heaved up his bulk to lie on his back.

The kitchen knife fell away. There was no blood.

Ikechukwu was staring at her.

‘E-eh? So the person that flame you, why it not hang your photo for parlour?’

‘Shut up, come here!’ Ikechukwu held Nwamgbeke and drew her to himself.

She fell on top of him and he quickly slipped his lips into hers.

Nwamgbeke pulled up immediately. ‘You want to do that thing so that I losing contlol and not lemember I leaving tomolo again abi?’

‘Come here jor!’ Ikechukwu pulled her back down to himself again. He held her firm and started kissing her again.

Finally, it died and she was still, and receptive.

Gently, Ikechukwu turned her and came on top her. Slowly, he took the blue shank buttons of her blouse off their holes and her breasts came into view.

They were full, well-rounded and bouncy.

Below him, a great hardness threatened to push away the zipper of his trousers.

He bent and covered one nipple with his lips, his fingers gently tickling the other.

Nwamgbeke’s eyes rolled up and stayed there, so that only their whites were visible now.

He gave her a sharp tight suck and she gasped, ‘Ikechukwu!’

She slipped one thumb into her mouth and with the other hand rubbed his shaved head.

A rough pounding noise flew through the air, jerking Nwamgbeke back to life.

Nwamgbeke’s eyes rolled back down and she quickly got up and crossed her arms on her naked breasts. ‘Who knock the door like that?’

He got up and helped Nwamgbeke up. Nwamgbeke buttoned back her blouse and ran her palm over her kissed lips.

She was heading out when Ikechukwu called, ‘Hey!’

She stopped and turned. ‘I go and checking who knocking.’

She looked down and saw the protrusion below Ikechukwu’s waist. ‘Oh, your okoro not come down yet?’

Finally, his organ softened and his zipper returned back to its normal position.

He walked out with his wife.

At the front door, he pressed down a knob and turned the handle to open it.

A fair young man in a broad white shirt and jean trousers stood facing them.

‘Who are you?’ Ikechukwu asked.

The man’s eyes shifted from him to Nwamgbeke who was staring back with her mouth wide open.

The man flew into the room and threw his arms round Nwamgbeke.

Ikechukwu turned to them, eyes wide in astonishment.

Finally they separated, but Nnamdi’s hand remained on Nwamgbeke’s waist.

‘Hey, who are you?’ Ikechukwu asked.

The boy turned to Nwamgbeke instead. ‘Who is he and what are you doing here?’

The two men’s eyes were now on her.

She turned to Nnamdi first. ‘Nnamdi.’

Then to Ikechukwu. ‘Ikechukwu.’

Back to Nnamdi. ‘Erm, Nnamdi, Ikechukwu is the man that came and pay papa hospital plice and later come and pay my blide plice.’

Nnamdi let go off Nwamgbeke’s waist at once.

Nnamdi took Nwamgbeke’s hand. ‘I want to talk to you in private,’ he said, starting toward the door.

At the door, Nwamgbeke turned to Ikechukwu. ‘I coming, you hear, he say he talk to me in plivate.’

The door slammed shut behind them.

Ikechukwu walked quietly to one of the cream-colored sofas and sat. He relaxed back into the soft, comfy seat, but pulled out the next minute to stare at the door, his fingers joined and his legs joggling.

Outside, Nwamgbeke said to Nnamdi, ‘Let stand her and doing the talking na.’

Nnamdi drew her a further away and finally stopped. ‘Why did you marry him?’ he asked.

‘Ha, you not hear when I say he come and pay Papa hospital money?’

‘Evely day he buy banana, water merlin, erm, what is that one that is kirikiri like mbembe?’

‘So is he come later and say he want mally me and he pay my blide plice.’

‘And you agreed to marry him?’

Nwamgbeke frowned. ‘What about it?’

The frown Nwamgbeke’s face deepened. ‘Nnamdi, so I not mally fine boy engineer that say he want mally me and wait for lunning away boy abi? Nnamdi, glow sense na, glow sense.’

‘I went schooling, told you I got an admission.’

‘So? I not telling to pay my blide plice before you wenting away? I tell you or I not told you?’

‘Ok, let’s forget the past. Where do we stand now?’

‘Hia.’ Nwamgbeke looked around. ‘We standing outside na.’

‘The person that paid your bride price. I thought he returns in the evening.’

‘Oh, you meaning Ikechukwu? He leturning any time he likening na, morning, afternoon and night.’

‘You will…’ Nnamdi’s phone began to ring.

He removed it from his pocket and put to his ear. ‘Sir?’

‘I’m already working on it, sir, I will call you back.’ He ended the call and returned the phone back to his pocket.

‘Inside who you tell am?’ Nwamgbeke asked.