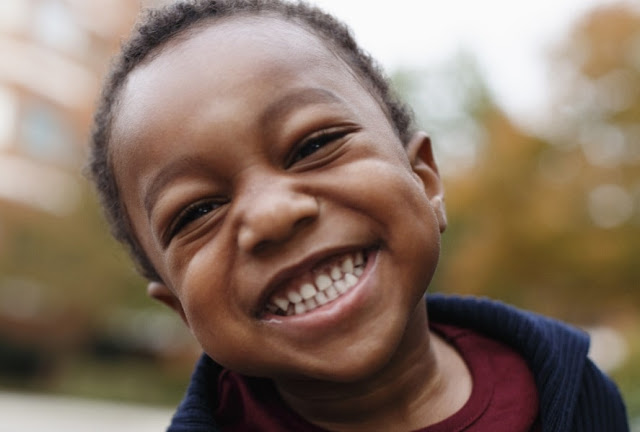 Read “My Smiling Baby Boy” by Daniel Nkado below:

I realized just how much he meant to me only a few minutes after I gave birth to him.

The nurse that had cleaned him up said to me, ‘What a beautiful baby boy’, smiling as if envious as she handed him over to me. He was wrapped in a soft, white cloth.

I stared at him with teary eyes and a smile. He was just so small. So vulnerable. Instinctively, all my protective hormones activated. I was ready to give in my life if that’d ensure he is safe.

I took his tiny hand and wrapped it in my palm. The silky-soft feel of his skin gave me joy. ‘I love you,’ I said to him.

For a tiny second I thought I’d seen him smile at me.

He smelt fresh, of precious baby soap, or whatever the nurses had used to clean the pinkish birth stains off him.

When my husband asked what name we will call him, I didn’t think it twice. I knew his name even before my contractions started that morning.

My husband began to laugh, that his annoying laugh that makes you look so stupid you’d want to punch him in the nose.

‘Honey—’ He broke off into laughter again. Now I really felt like punching him. Right in the nose. His big pointy nose.

‘And your point is?’

‘We don’t give those kind of names anymore na. You know, names like Udokamma, Nwakaego and Chukwuolisa – they’ve all gone extinct.’

‘My name is Nwakaego, you realize that right?’

‘My point exactly, honey! Okay, tell me, when were you born?’

I clucked and turned my face away, rocking my precious boy. His tiny lips fastened limply to my nipple and I wondered if he was getting enough milk out. I held my breast which had doubled in size and weight since my later months and kept pressing it gently for him. I needed to be sure he was feeding well.

I caught my husband’s eyes staring and for a tiny amusing second, I wondered if he wanted some milk too.

My husband took my hand and covered it in his.

He was sitting by the side of the bed, eyes bright with joy. He wanted this baby even more than I do—he would not say it but all I only need do was look into his eyes. It was right there, like a thin layer of clean sparkle, it framed each ball. Love.

‘Honey, all I am saying is that we should give him a name that would make people want to be friends with him on Facebook,’ my husband said.

Now I looked at him with a smile. He can sound really funny at times. ‘So what do you suggest?’ I asked him.

I watched him with compressed lips.

‘Okay, fine, let’s just go with yours!’ he threw this out with a gasp of defeat.

I smiled and rubbed him on the head, shaved so neatly it felt rubbery to my palm.

And that was how we came to name our little boy, Uwam. My world—because that is what he truly is to me.

He soiled his diaper quite often, woke up 3-4 times in the middle of the night to cry and feed, but it never bothered me.

I did not go back to work. Attending to my boy was a more satisfying job to do. I did it full time.

Maybe that was why he grew so fast— from the tiny, frail thing at the hospital that day to this robust frisky boy.

He never called me mommy without a smile.

The day I caught him playing with my purse, all my small lady items scattered round the floor, he had said ‘I’m sorry, mommy’, with a smile, as if he knew that though I had raised my hand, that I was never going to spank him.

Who dared lay a finger on such an adorable thing?

He was a happy smiling boy whose mischief was more entertaining than infuriating.

He was our joy, our entertainment, the most precious thing we ever owned.

Once, I had begun to feel that his daddy was stealing him from me, so I made them stop going to the park together on Saturdays.

Instead of going out to play tennis with his father, watch him play in the true sense of it because he was no taller than two rackets joined together, he would stay at home with me. And to be with him, his father stopped going to the park, unless we were all to go together.

He changed our Saturdays; so too our Mondays, Tuesdays, each day that followed his arrival.

On Saturdays, we cooked together, saw a movie together, played ludo together. We revelled in the new unity he brought.

We never felt bored in his presence.

His smile was a powerful antidote for sadness. Since his arrival, it had departed from us entirely—sadness!

Even the day his stomach ache started, he was smiling as my husband drove us to the clinic.

When the doctors gave him countless injections and one bitter pill after another to swallow, he smiled while we felt bad for him.

And because he was smiling, our sadness gave way for strength.

And then the test results came two days after, and our lives shattered.

It said his liver is bad, that he had been born with a congenital liver defect.

My boy was going to die.

There was nothing we could do, except book him for a transplant in 72 hours, or less. There is a good clinic in the US that was recommended. Cleveland Clinic, Ohio.

‘There is no time,’ the lanky doctor told us. ‘It has gone so late complete failure is expected in four days at most.’

I felt like slapping him. How can you be expecting something so bad!

I insisted my husband and I get tested right away. Hopefully, one of us will be a match. There is not enough time to wait for a cadaveric liver. Only living donor transplantation was possible now.

As I watched my boy that evening, smiling even on his sick bed, I did not know when a tear dropped off from my eyes. He has lost some weight and the bones of his forehead showed pitifully.

I sniffled and tried choking the tears back. But it was hard. It was my world that was going to leave me.

His daddy had warned me never to show any sign. But I guess I was not really as strong as I had always given myself credit for.

‘Mommy, why are you crying?’ my boy asked me, a hint of smile still on his face.

I shook my head, wishing he would stop talking.

He raised his hand, twisting forward to touch my face, probably to wipe the tears off my face. But he winced in pain and stayed back down.

‘Please stay down,’ I said to him, holding him. ‘Stay down, my boy, and don’t hurt yourself.’

He settled back to the bed. I hated the network of tiny transparent tubes the doctors had set up all round him.

I watched him for long minutes, wishing it was possible to switch places with him.

‘I love you, mommy,’ I heard him say. He had been watching me too.

My tear bag broke then. ‘I love you too, my world,’ I tried saying but the tears didn’t allow me come out clear. ‘I love you. I love you,’ I was croaking, rubbing his hand. It had turned from fleshy to bony, from richly brown to sickly pale, in so short a time.

My boy was suffering.

My nose was running with a clear gluey liquid.

The door opened then and my husband came through.

He saw me and his face darkened in anger.

He pointed to the door and barked at me to walk out.

I obeyed, but didn’t fully close the door. I left a tiny crack from where I watched him attend to his son.

I knew he was hurting just as I am, if not more, but the ego of men wouldn’t allow him show it.

But that ego shattered the next day when our world finally left us.

He had died with that smile frozen on his face.

As I stared at his pale, stiff body, I only did one thing.

For the first time since his illness started, I returned his smile. That smile only meant one thing, I realized now—he was happy wherever he is.

I turned and hugged my husband who has been vibrating with tears behind my back all the while.

‘I loved him,’ my husband said. ‘I loved him so much. I don’t know if I showed him that enough.’

Daniel Nkado is a Nigerian writer and journalist. Read more stories from him on www.dnbstories.com.

One Comment on “This is the Saddest Short Story ever written!”