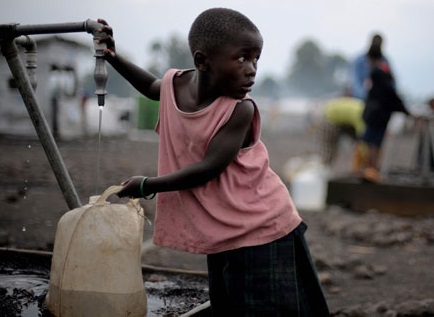 Sometime in 2012, little Mary came to live with her Aunty in Somolu.

Mummy just died and there was no other person to stay with than Aunty Esther.

But the real truth is that little Mary wouldn’t have needed to make the long journey from Ekiti, her birthplace, to Aunty Esther’s house in Lagos if Daddy hadn’t taken up drinking.

Most nights he came home very drunk, and when Mary complained of hunger, he’d pass her a sachet of dry gin.

Feeding only on gin and water and fruits nearby trees were generous enough to share, 9-year-old Mary grew thinner and thinner by the day.

At Aunty Esther’s house that late evening she arrived Lagos, confused and tired, thick-bodied and fair-skinned Esther stared at her, expressionless.

Mary made to sit on the couch.

Mary, startled, dropped to the carpet at once. ‘Epele, Aunty,’ she said.

Luckily, her cousins weren’t as cold. They welcomed her well, played with her, and even called her sister.

Because they were older and all boys, it had been easy for them to take to her.

She was an adorable young girl, after all.

Deprived, yet so gentle.

Full of smiles even in her shabby clothes.

She ate last, after the rest of the family had all eaten, and she had washed all their plates.

Esther always served her food herself, a single spoon of whatever that was made.

At 9, there was nothing she couldn’t cook.

There was no type of clothing she couldn’t wash.

She was perfect at scrubbing too.

Yet Esther hardly found any of these satisfactory. She barked often at her, called her stupid girl, foolish girl and nonsense girl.

Most nights, you’d find Mary folded up beside the kitchen cabinet, crying.

Her tears come not from Aunty Esther’s harsh voice or name-calling, but because of a precious time long ago that she so very missed.

The time Mummy was still alive and called her Ayomipo. The times she ate apple and wafers and meat.

The times she could ask for more food if she wasn’t full.

Luckily, the sadness usually went away with the night and mornings were calm and better.

Often, she sang and hummed to a popular poem she loved as she washed, scrubbed and cooked.

Once, she’d finished all chores by early afternoon, the fastest she’d ever finished before.

She spread an old carton in the corridor to sleep.

But Esther returned earlier than usual that day, and the next minute Mary was outside again with a new bundle of clothes to wash.

Sometimes, she found some that had not been used since their last washing.

Once, she’d taken in a green wrapper and in quiet, fear-hushed voice, said to Esther, ‘Aunty, this one is still clean.’

Esther held her by the ear and pulled her out of the room. ‘Wash them all!’ she barked.

It was a bright Saturday morning, that kind of morning you wake up to blinding sunlight and wonder if the clock is deceiving you.

She’d use them to make soup in the afternoon when she returned with the boys, she told Mary.

Little Mary might have wondered why Aunty suddenly wanted to prepare soup herself.

She walked into the kitchen with the bowl.

All she needed to do with the meat was boil them in salt and onions to keep them good till Aunty returned.

This she did before moving outside to finish with the laundry.

It was now almost 3 in the afternoon; neither Esther nor any of her three sons had returned.

There was not a single thing to eat in the house.

At around 4, her stomach churning badly from worm attack, Mary walked into the kitchen and took a lump of boiled meat from the pot.

She cut a piece from it and then dropped back the bigger piece.

But she still came later and ate the other part too.

Esther returned at around 7.

Still in her iro and buba, she walked straight into the kitchen. She opened the pot of boiled meat and brought a spoon.

One by one, with great attention, she counted the boiled lumps of meat.

Unknown to little Mary, Aunty Esther had counted the meat in the morning before handing her the bowl.

Discovering a lump has gone missing, Esther swallowed a huge amount of air and let it out.

She clenched her fists, fighting the urge to throw things.

‘Mary!’ Her voice resounded round the house.

‘Mary!’ She came out to the sitting room a raging mess.

‘How many pieces of meat did you remove from the pot?’

Esther untied her wrapper to retie it well. Then she descended on the little girl.

She kept on slapping, knocking, scratching, till Mary’s scream turned into a muffled groaning.

Finally she freed the girl.

Bruised and battered, little Mary squirmed round on the carpet.

Esther opened the door and kicked her out of the house.

When her sons came back, they asked her where their young sister was.

Two days gone, nobody has heard a word about little Mary.

It wasn’t till the uniformed men came to her shop to arrest her that Esther realized the gravity of the evil she had committed.

Incarcerated for over four months now, she had finally came to understand the other part of life.

The part that isn’t so smooth and blissful.

The pain and anguish she so generously showed a little girl that once came to live with her she now lives with day and night.

__based on a real life story.