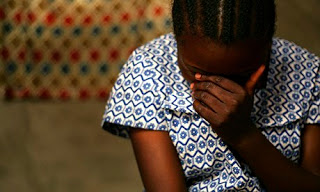 It was a breezy Sunday afternoon.

Comfort has just finished spreading the clothes she washed on the line in front of their compound when her elder sister came out carrying her bags.

The weekend visit was over and she was set to return to her husband’s house. It was often that she visited on weekends.

‘Aunty, are you leaving?’ Comfort asked her elder sister.

But today she didn’t just give a little wave, say bye-bye and then walk off as usual.

Today she asked comfort a question that excited her.

‘Do you want to follow me?’ Aunty asked her younger sister.

Before she could blink, Comfort had run into the house to change.

As if to be sure Aunty did not suddenly change her mind because she was taking too long, she ran out and finished tying her scarf outside.

Done dressing, she lifted one of Aunty’s bags onto her head and the two sisters left for Okwoyi that afternoon, where Aunty lived with her husband.

When Mama and Papa returned and discovered that Comfort had followed Aunty to Okwoyi again, Mama cursed at her.

‘This girl doesn’t hear,’ she said to Papa. ‘She has gone to Okwoyi again, hasn’t she?’

Papa said nothing and just walked inside.

At Okwoyi, Comfort finished eating the biscuits and juice Aunty offered her.

She washed the dirty plates in the kitchen and helped Aunty wash a few wrappers before preparing to leave.

‘Must you go now?’ Aunty asked her.

Comfort indicated the sky. ‘Aunty, the rain is coming. I have to go and pack the clothes I washed.’

‘Leave them, Mama will pack them.’

‘What if they are not back yet?’

On this note, Aunty conceded with a nod. ‘You can go and take one packet of biscuits from the fridge,’ she said.

Excitedly, Comfort ran back in and took one pack of Short Bread from the fridge.

Aunty bade farewell to her.

The evening was cool with the sign of rain. Birds chirped noisily from the bush bordering the narrow path to Iyienyi.

Comfort was trekking back home. The path was as lonely as always.

Unaware of the evil lurking in the bush, she sang a known tune and walked on.

He jumped out on her from nowhere. He blocked her.

She glared at him. She recognized him.

She knew him from the times he made passes at her, mostly playfully, calling her ‘my wife’ and things of sort.

Comfort never took it serious. She was only 15 and he would be nothing less than 40.

He was only playing, she’d always thought.

He put one finger to his mouth. ‘Shhh! Don’t make noise.’

Comfort did not understand. What she saw in his eyes—a flaming sick desire—terrified her.

She stepped back, wanting to scream.

But he grabbed her the same instant, holding her lips shut with one palm.

That was when his friends jumped out of the bush too. Comfort did not know he hadn’t come alone.

Together, they carried her into the bush.

She struggled and struggled on them, but what chance can a frail teen girl stand against three able-bodied men?

It was raining now.

Deep in the bush, they dropped her in the mud and one by one, they had their way with her.

A 15-year-old girl with no prior knowledge of men before.

After they’d revelled in the sinful pleasure and their twisted desires had been quenched, they zipped up and disappeared into the night.

Comfort was in the mud, writhing in pain, her laps stained all over with her innocent blood.

Because she saw him, knew him, his name did not leave her lips. She muttered it as she staggered back to Aunty’s house.

In front of the house, she dropped to the soil.

Aunty was screaming, cursing and crying. ‘Nwogu, it shall never be well with you! Nwogu, for doing this to my small sister, you will not die well. You will rot in hell!

But Aunty’s husband was more a man of action. He strode off into the dark in search of the animal that had defiled his teenage sister-in-law.

But he knew. The animal knew many would come for him so deeper and deeper into the dark he ran, pursued by shrieking shadows of his iniquity.

Nobody knew his whereabouts. Nobody saw him.

When Mama heard, she was devastated. She was furious.

She was in pain.

But mama did something wrong.

Mama vented her anger in the wrong way. She scolded a traumatized girl.

A 15-year-old girl still living the horror of a cold-blooded encounter.

‘What is wrong with you?’ Mama’s voice was high. ‘Have I not told you to stop going to Okwoyi before? Answer me, have I not?’

‘Now that three men has raped you, if you get pregnant, who will be the father? Answer me!’

The next morning, Comfort did not come out for the usual morning devotion.

It was only after the prayers that they saw.

Comfort’s lifeless body was dangling from the guava tree at the back of the compound.

She had used her precious blue scarf.

Based on the true-life story of the death of Comfort Uche-Ume, of Amaeke Abam in Arochukwu.