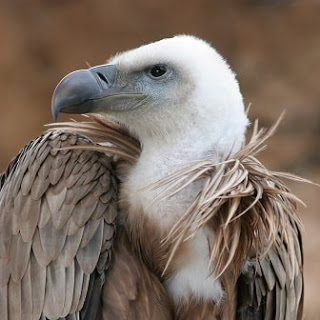 ‘What are we going to do now?’ Ngeli asked.

The vultures were catching up with them. In the proximity, their screeches now threatened to pierce their ear drums.

‘Faster
now, fatties!’ Kobi screamed. He had gotten far ahead. No one could
have imagined he could run at that speed on the shifting sand with his
curved legs.

Now they could see the silhouette of a giant wing below their feet.

‘We will never outrun them!’ Anene screamed.

‘Yes,
yes, not possible for legs to outrun those gigantic wings!’ Kobi
screamed back. ‘What was I thinking?!’ He flew into the air and plunged
into the sand. In the blink of an eye, he has disappeared into the sand.

From directly above their heads, they heard one great shriek and knew the worst has happened. The birds were now upon them.

Almost at that instant, the huge bird landed in their front.

They halted and turned their faces away from the dust the bird’s giant wings raised.

The creature looked every inch a vulture, with its bald and triangular head, only this vulture looked a hundred birds in one.

‘Well, at least we have just one to deal with,’ Ebubedike said.

The large bird craned its neck and gave out a great deafening screech.

Ebubedike
held up his hand-carved spear and Ngeli her bow, but both knew deep
beneath their hearts that the creature standing before them was beyond
what their weapons could tackle.

They watched the bird now. It watched them too, as if trying to discern what creatures they were.

Then it started toward them, one giant foot after another.

Ngeli
aimed and shot at it. The arrow flew straight to its neck, but
deflected off on hitting the bird. It was as though its feathers were
wood.

As if enraged the tiny strangers dared to attack, the bird shot out its long neck again and gave another shriek.

Anene threw his hands to his ears.

Ebubedike lunged towards the vulture with his spear. The bird raised one feet and knocked him away.

The big-bodied wrestler fell off into the air. He landed painfully on his back a quarter league away.

Ngeli shot at it again.

The bird turned suddenly to her. She drew back in fear.

Now standing before her, the creature stared at her.

Anene picked a rock from the sand and hurled at the bird. It hit the bird’s bald head.

The
vulture turned to him. It spread out its massive wings and glided into
the air. Next its claws gripped Anene’s head and it flew up with him.

Ebubedike got up from the sand and ran after it, but the bird has disappeared far into the sky with Anene.

Now Kobi emerged from the sand. ‘Tell me I am seeing spirits!’ he exclaimed.

‘The bird has captured our friend,’ Ngeli said to the desertling.

‘Of
course, of course, screel vultures must always capture. Only in fact I
am very greatly surprised that they had left you two alive and still
standing.’

‘It was just one bird,’ Ebubedike said.

Kobi blinked twice. ‘Wait! Just one? Kick me in the teeth! The vultures of doom always seem to move in groups.’

Suddenly,
Kobi’s eyes flew wider. ‘Aha! It must have been the messenger. Yes,
yes, and it has only gone to tell. Oh no, we must in fact disappear from
here at once!’

Kobi was running off when Ebubedike blocked him. ‘Tell us what to do to save our friend!’

‘No, no, you need not to bother, fat one. We will come back later and look for his bones. They always drop them.’

‘Talk now before I bathe you with salt!’ Ngeli thrust her hand into the basket.

Kobi
folded his arms. ‘You must threaten me with your poisonous salt lumps
now, must you not? But I only tell the truth. Kobi knows not how to rob
screel vultures of their catch. Kobi not experienced in that. They
capture and go far into the sky. They nest in the clouds, some say. We
only but come for bones later, that has always been the story.’

‘No!’
Ebubedike screamed. He dropped to the sand. ‘We can’t just lose him
like that. We can’t. There must be something.’ Big veins stood out on
his scalp.

Ngeli stared at him, eyes dim and sad.

Kobi
waddled closer. ‘I say now that I am sad for your grievances, stranger
friends. But we must in fact disappear from here now. Dangerous grounds
we are in. If we do not heed, I’m sorry but there might not be enough
anyone of us left to mourn us.’

Ebubedike finally got up and they followed Kobi.

The desertling took them deep down the sand field till they got to a gravelly land.

Kobi halted. ‘Safe ground at last,’ he breathed. ‘We rest here and journey continues in the morning.’

‘A bed with stones and sand, how does that work exactly?’

Kobi set about gathering grasses and shrubs together.

Then
the desert creature started to weave the plants he’d gathered together.
His fingers worked fast and precise. Soon he’d created a flat bed,
broad enough for something his size to lie on. ‘This one for me,’ he
said. ‘Now you two can prepare yours.’

‘Oh
well.’ Kobi put one hand to his head. ‘I must have to help the ones who
carry the peppers and has lost a friend in the day too, will I not?’

They
helped him gather the dry grasses and he created them their own beds.
The beds lie side by side each other, Ebubedike’s visibly larger.

‘Thank you, Kobi,’ Ngeli said. ‘Only that they lie too close.’

‘I’m not afraid of anything, it’s just—’

They battled to understand what the creature meant.

‘Oh well,’ Kobi continued, ‘I must tell you now, stranger woman, fat people do not always have it big too. Theirs always tiny. Tinily embarrassing.’

‘You
may lie down, you are safe with me,’ Ebubedike said to Ngeli. And to
Kobi, ‘If you must know, my desert friend, I do not have it tiny.’

‘Let me look for sticks and make fire,’ Ngeli said.

Ebubedike looked up. ‘What a dull moon.’

Ngeli carried the basket. ‘Care for some bread?’ she asked.

‘Oh.’ Kobi scratched at his head.

Ngeli held out a loaf made from yam flour. ‘Bread, warrior.’

Ebubedike shook his head. ‘I feel no thirst for food right now.’

Ngeli gave a slow nod of understanding. ‘But you must eat,’ she told him. ‘You need your strength.’

Ebubedike was looking at her. ‘Do you feel his absence?’ he asked.

‘Surprisingly
very deeply, my warrior,’ Ngeli said. She turned her eyes into the
darkness. ‘Never thought I would have. It’s just so quiet without him
now.’

Ebubedike nodded. ‘He is a good man.’

Ngeli nodded her agreement. ‘He is.’

Kobi coughed. ‘Erm, why you two talk about your precious loss, can I have some peppers for my stomach here?’

Ngeli turned to the creature. ‘Have you no pity in your heart?’ she asked him.

Kobi stared at her.

Kobi
stood. ‘What does stranger woman know about Kobi? Kobi known great deep
sadness before. Kobi married sadness, slept with it all night, drank
from an ocean of it each day, but now Kobi finally conquered it, Kobi
won’t let it win no more. For it is in fact okay to be sad in heart, but
never never okay to act it!’

Now Ngeli stared at the creature.

She quietly dipped into her basket and handed Kobi a handful of uda seeds.

‘Oh gracious!’ Kobi sniffled the dried seeds. ‘You must come from the land of peppers!’

‘Yes, yes, wherever that may, the gods bless their soil.’ Kobi threw all into his mouth and started to chew.

Later
in the night, when they had dozed off on the straw beds, he crept to
where Ngeli was lying and tried to take the basket from her.

Ngeli slapped his tiny hand and Kobi gave a start. ‘Forgive me, precious stranger. I do not imagine you will catch me.’

‘Next time, I’ll have your ears!’ Ngeli said to him.

‘Oh
no, please, you will need not to, I assure you. Kobi has small ears
already, cut it back some more and hearing becomes worser. I swear to
you now, Kobi not try to steal from you again.’

‘Good!’ Ngeli said to the creature. She lay back down to sleep and Kobi walked quietly away.

When they opened their eyes in the morning, they were surrounded.