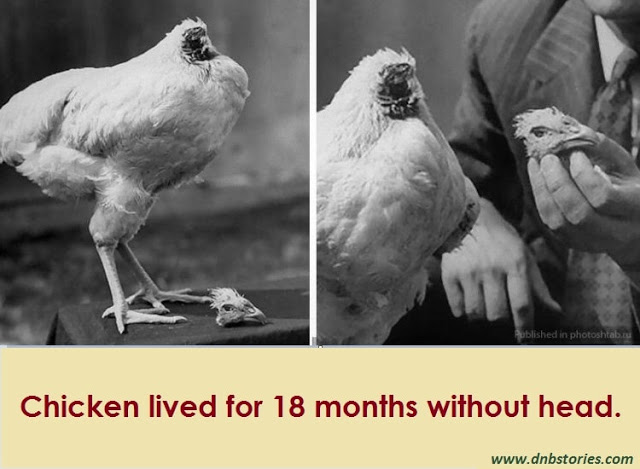 Over 70 years ago, in the multi-landscape US state of Colorado, a farmer beheaded a chicken and it refused to die.


Mike, as the bird was named, was able to live for 18 full months without its head.


On 10 September 1945, Lloyd Olsen and his wife Clara were killing chickens, on their farm in Fruita, Colorado.


Olsen would decapitate the birds, his wife would clean them up. But one of the 40 or 50 animals that went under Olsen’s hatchet that day didn’t behave like the rest.


“They got down to the end and had one who was still alive, up and walking around,” says the couple’s great-grandson, Troy Waters, himself a farmer in Fruita.


The chicken kicked and ran, and didn’t stop.


It was placed in an old apple box on the farm’s screened porch for the night, and when Lloyd Olsen woke the following morning, he stepped outside to see what had happened.


But how could this have been possible — a question everybody has asked.


Part of the reason that a chicken can live without its head has to do with its skeletal anatomy, according to Dr. Wayne J. Kuenzel, a poultry physiologist and neurobiologist at the University of Arkansas.


The skull of a chicken contains two massive openings for the eyes that allow the brain to be shoved upwards into the skull at an angle of around 45 degrees.


This means that while some of the brain may be sliced away, a very important part remains.


“But because the brain is at that angle,” says Kuenzel, “you still have the functional part that’s so critical for survival intact.”


For a human to lose his or her head would involve an almost total loss of the brain. For a chicken, it’s rather different.


“You’d be amazed how little brain there is in the front of the head of a chicken,” says Dr Tom Smulders, a chicken expert at the Centre for Behaviour and Evolution at Newcastle University.


It is mostly concentrated at the back of the skull, behind the eyes, he explains.


Reports indicate that Mike’s beak, face, eyes and an ear were removed with the hatchet blow.


But Smulders estimates that up to 80% of his brain by mass – and almost everything that controls the chicken’s body, including heart rate, breathing, hunger and digestion – remained untouched.


It was suggested at the time that Mike survived the blow because part or all of the brain stem remained attached to his body. Since then science has evolved, and what was then called the brain stem has been found to be part of the brain proper.


“Most of the bird brain as we know it now would actually be considered the brain stem back then,” Smulders says.


“The names that had been given to parts of the bird brain in the late 1800s were all indicating equivalences with the mammalian brain that were in fact wrong.”


Mike was fed with liquid food and water that the Olsens dropped directly into his oesophagus.


Another vital bodily function they helped with was clearing mucus from his throat. They fed him with a dropper, and cleared his throat with a syringe.


The night Mike died, they were woken in their motel room by the sound of the bird choking.


When they looked for the syringe they realised they had left it at the sideshow, and before they could find an alternative, Mike suffocated.


“For years he would claim he had sold [the chicken] to a guy in the sideshow circuit,” Waters says, before pausing.


“It wasn’t until, well, a few years before he died that he finally admitted to me one night that it died on him. I think he didn’t ever want to admit he screwed up and let the proverbial goose that lays golden eggs die on him.”


Olsen would never tell what he did with the dead bird.


“I’m willing to bet he got flipped out in the desert somewhere between here and Phoenix, on the side of the road, probably eaten by coyotes,” Waters says.


Of course following the huge fame Mike brought to its owners, many community members tried to replicate what Olsen had done.


Why those who tried to create a Mike of their own did not succeed is still hard to explain.


It seems the cut, in Mike’s case, came in just the right place, and a timely blood clot luckily prevented him bleeding to death.


Troy Waters also suspects that his great-grandfather tried to replicate his success with the hatchet a few times.


A neighbour who lived up the road would buy up any chickens for sale at an auction in nearby Grand Junction, Colorado, and stop by the family farm with a six-pack of beer for Olsen, to persuade him to explain exactly how he did it.


“I remember [him] telling me, laughing, that he got free beer every other weekend because the neighbour was sure he got filthy rich off this chicken,” Waters says.


“Filthy rich” was an opinion many held in Fruita of the Olsen family. But according to Waters, that was an exaggeration.


“He did make a little money off it,” Waters says.


He bought a hay baler and two tractors, replacing his horse and mule. And also – a bit of a luxury – a 1946 Chevrolet pickup truck.