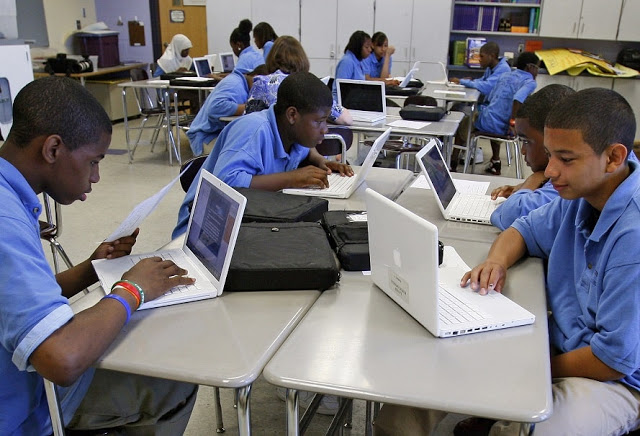 Ever imagined what it would be like if Africa was a school and all the countries are students?

Nigerian writer, Soogun Omoniyi, has the best answer to this.


Read on as Omoniyi aptly describes the character of each African country:

ETHIOPIA: One of the strongest and oldest boys in school. He doesn’t do cliques. No one has ever seen him walk; he is always on the run. He runs home, he runs to the toilet, he even runs when others are marching to class. He loves history. At times, he comes across as weird.

ZIMBABWE: That very serious student. He reads anything readable, often appearing unkempt. Some teachers like him, some don’t — because he invents his own way of answering questions. He gets punished for it most times but doesn’t care. At times, he goes to represent the school in international competitions. He has a powerful girlfriend.

THE CONGO: The tomboy. Coming from a challenging background, she has risen to be the best dancer in school. She just wants to dance. She dances in class, on her way to class, and after class. Together with Ivory Coast and Cameroon, new dances have been brought to school. Unlike before, she now does pretty well academically.

SOMALIA: The girl with a torn uniform and dusty sandals. Her parents are really poor. She cries to school every day. Many students still consider her the most beautiful girl in school.

NIGERIA: The muscular boy in school, with hairy legs, who seems to know his books, but doesn’t have sense. He’s been in the same class for many years, but somehow, has managed to stay relevant and respected. The teachers say he has a lot of potentials no other student can beat, but relies too much on his size. He comes to school each day with new proofs of his senselessness. He sometimes exchanges his lunch for money. He loves to bully Ghana, his best friend. He loves to sing too.

NAMIBIA: The school nice girl. Easygoing. Rich. When she’s not sitting beside South Africa, she is hiding away in a corner. All the teachers love her. The aroma of her food gets the class during break. She likes to share her food.

GHANA: Could pass for the darkest dude in class. He works really hard to improve on his studies and it pays. Sometimes, he attacks his best friend, Nigeria, but he usually ends up getting floored or beaten. Despite the plenty of fights between them, they always have each other’s backs. He has a funny accent. He’s responsible for the bad things learnt in school. His mum has never stopped packing him Jollof rice for lunch. He’s the keeper of the football team.

SOUTH AFRICA: This is Zimbabwe’s slay queen girlfriend. Proud, more like a brilliant brat. She is the richest girl in school. She loves to travel to Europe — where she once schooled before leaving due to her intense hatred for summer. She’s the face of the school. South Africa can speak several languages. Her father is one of the most important officials in school. Everyone wants to play with her, but she doesn’t like to play with everybody.

THE GAMBIA: The tiny boy with a deep voice. When he’s not causing some trouble in school, it’s really hard to notice him. His school father, Senegal, who is also captain of the football team, loves him dearly. Despite coming from a not-so-rich family, he is satisfied with his life. He always looks neat and nourished.

ERITREA: Short with a potbelly, but he has his way with ladies. He’s already promised marriage to half of the girls in school.

RWANDA: This is the neatest dude in school. He wears two pairs of socks — one pair during school, the other after school. He cleans and rearranges his locker every hour. He follows the school rules to the latter and doesn’t do what his mummy frowns against. While girls love to gather around him, guys bully him a lot because they think he is a tomgirl.

SUDAN: He brings real guns to school and hides them inside his locker. His kid brother, South Sudan, who happens to be the youngest kid in school, also has guns that everyone goes to watch during break. There’re speculations that the brothers don’t really like each other, no one is sure.

EGYPT: One of the first to enrol in the school. He wishes to change school, but it’s almost impossible. He frequently scales the school fence to bond with students from other schools. He’s intelligent and knows a lot of subjects. The school hopes that one day, he, Nigeria and South Africa will win the championships for them.

BENIN: Nigeria’s sidekick. Students are afraid of him because he brings charmed rings to class and threatens them all day. He helps Nigeria get some contraband.

KENYA: The class nerd. She is the most hardworking girl in school. She has many of the latest gadgets that everyone wants to touch. She loves computers and technology. She was once suspended for hacking into the principal’s network to change her examination score. The school is now proud of her.

ALGERIA: The boy with the biggest head in class. He sits at the back so he won’t obstruct other students.

All about Jodie Foster’s family, marriage, wife, husband and kids

All about Kylian Mbappé’s family, marriage, wife and kids

All about Gabrielle Union’s family, marriage, husband and kids