by Gloria Godfrey and Hot Mum 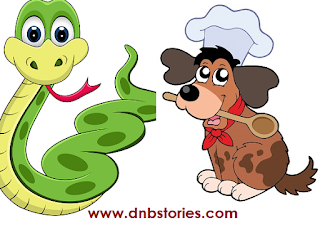 Just when we thought DNB is the most animal-loving blog ever, two DNB Mamas came forward with this:

1. An Encounter With The Devil by Gloria Godfrey

I have always hated snakes.

I call them little devils and my fear for them is so immense I can stop a movie on sighting one in the scene.

Once, a friend of mine told me that he’d killed a snake in front of his gate and I stopped visiting him.

I remember in one of the episodes of “Ebubedike and the Desertlings of Uforo” where Ebubedike wrestled with eke ogba, I almost didn’t read that chapter because of the scary picture, and when I eventually did, I kept imagining every log of wood around my house to be a python.

At school, it was exam’s period and I was staying over at a friend’s.

It’s a very remote area surrounded by trees and bushes. My friend’s house is one of the few ‘normal’ houses around, others were mostly uncompleted cement and wood structures.

But the environment is very quiet –exactly what I needed to concentrate on my reading.

That fateful Sunday morning, I didn’t go to church with others.

Going back to it now, I think that might have been the reason I encountered the devil in the first place.

I had gone out to buy waakye – a popular Ghanaian dish of cooked rice and beans.

I was humming to a tune as I walked back home. The woman had given me extra.

I opened the gate to the house and there it was, this black, long thing.

At first, I thought it was just a dried stick lying on the ground.

A great chill of horror swamped over me.

Adrenaline pumped through me. Coming back to life, I ran like never before.

I even threw away my food in the process. My precious waakye.

I got to the nearest shop, screaming “Maame, Maame!!

“Adeyin – what is it?” the woman who owned the shop asked as she ran out, adjusting her wrapper.

I took about a minute to catch my breath before I told her. “Snake o! Maame, snake o!” I was pointing.

The woman laughed long and hard before asking me where I saw the snake.

By then, other people who heard my screams had come out too, each wearing enquiring faces.

Their mouths burst open in laughter when they heard it was a snake.

They followed me back to the house, but the devil was gone.

Even that sickly smell of it was gone too.

Finally, my breathing returned to normal. Though my feet still felt twitchy as I walked into the room.

I locked the door by both bolt and key and didn’t come out for the rest of the day.

The next morning, I begged one of the boys in the compound to accompany me through the bushy ‘Appian’ way we normally follow, but to my surprise, and relief, I saw that the path had already been cleared.

When I got to Maame’s shop, she smiled and said, “We don’t want you to have another heart attack, that’s why we cleared the bush.”

I laughed and thanked her greatly.

I finally got used to going through the path alone, but that brief encounter with the devil, that profound horror I felt that day, has etched in my memory ever since.

Something I will never forget.

Three years ago, my marriage was perfect, till my husband decided to get a dog.

In fact, it was his square-headed friend that advised him to buy the foolish dog.

He sold it to him.

I no longer give him meat whenever he visits.

That evening, it had been like a joke as he told us the good news that his dog has given birth.

You need to see the big smile on his face as he narrated what he and the dog went through before she could finally conceive.

For a second, I had the stupid thought that he might have been the one that impregnated the dog sef.

Well, maybe not so stupid though—nothing is impossible these days.

That same evening, he took my husband to his house and when my husband came back, he was no longer the same.

He talked like him, used people pronouns to refer to dogs and told me how adorable the dog’s babies were.

Then he dropped the real bombshell! He has paid for one.

My husband has paid for one dog.

‘Where will you keep it?’ I asked him.

‘Here in the compound na,’ he said. ‘I will build a small house for him at the back.’

He didn’t just get a dog, he had to buy the he one.

‘Better I don’t set eyes on it,’ I said, walking into the room.

‘What do you mean by that?’ he asked me.

But I was gone.

Finally, on a Friday evening, the dog I arrived.

My husband has gone from work to pick it.

I must admit that as a baby, the dog was beautiful.

Though I sometimes get jealous with the way my husband pampers it.

Can you believe one night, he came back late and discovered the food has finished. We drove round the entire streets of Lagos looking for dog food in the middle of the night.

I was mad. I asked him why I can’t feed the useless dog the thick Okro soup I made and my husband shook his head, that way people do to mean someone is talking rubbish.

After a month, I picked a calculator and added up all we had spent on the animal both food and drugs and discovered it was someone’s monthly salary.

The next morning, I added rat poison to the dog food before feeding him.

But this witch of a dog would not eat the food. He would bend towards it, smell it and then start to bark.

He even scared me. What if he suddenly starts to talk and he would tell my husband that I have put rat poison in his food.

Not knowing what else to do, I stayed down, watching in grief as the new animal takes over my home.

My husband named him Hercules. I told him he should have given him Sleeping Beauty instead.

All he does is eat, sleep, wake up and eat again, and the cycle continues.

Now he has not only stolen by husband from me, but my little boy too.

That one will hardly do anything these days without inviting him.

I hate my husband’s dog.

But I am finally happy now.

I have paid them well.

23 Comments on “Life Story: Animals That Shouldn’t Come To DNB?”