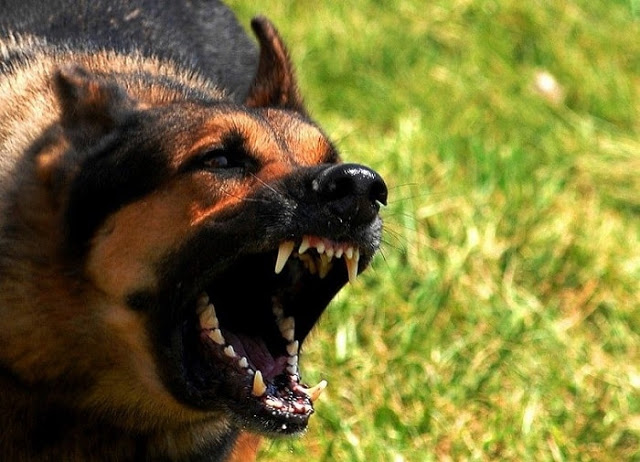 Rabies occurs in more than 150 countries and territories in the world. According to WHO, dog bites are the main source of human rabies deaths, contributing up to 99% of all rabies transmissions to humans.

Rabies infection causes tens of thousands of deaths every year, mostly in Asia and Africa.

These 5 tips will help you survive a dog attack:

1. If a dog is showing signs of aggression, don’t look it in the eye as it will take that as a challenge.

Don’t smile either as it could interpret that as you baring your teeth. Instead, stand sideways to it so you present less of a threat. Without making sudden movements, slowly back away and out of the dog’s line of sight.

2. You shouldn’t try to run away from a dog as this triggers their chase instinct.

But there are exceptions to this rule. If a number of aggressive dogs are attacking you, your chances of winning that fight are small. In this case, your best chance of getting out alive is to run and get up high as dogs can’t climb. If that’s not possible, remember that dogs can be intimidated: raise your arms above your head to make yourself appear taller and roar loudly. If there are stones nearby, throw them at the dog to make it think twice about attacking.

3. If the dog keeps coming, know that its primary weapon will be its bite.

Do what you can to get something between you and that bite – a stick, a jacket or a backpack. If it’s unavoidable, you need to think about which part of your body you would prefer the dog to attack. It’s a Hobson’s choice – the bite will hurt – but you want to protect your most vulnerable parts: your neck, your face, your chest and your groin. This might mean offering it a less vulnerable part of your body such as the thick flesh on your outer thigh.

4. If possible, though, you should wrap whatever clothing you can around your forearm and offer that to the dog.

Your arm has a higher proportion of bone than your leg and will bleed less. This manoeuvre will leave you with three limbs with which to fight back. Remember, when dogs bite, they dig their teeth in firmly and don’t let go. If you try to rip your arm from that bite, you’ll only worsen the tear and end up with a vicious, debilitating open wound.

Worst-case scenario: it’s a fight to the death. You may want to avoid a ground fight as this leaves you exposed. Instead, you need to quickly neutralise the dog. The best way to do this is to use your body weight and fall on the dog to crush it – a dog’s ribs break easily. With your free arm, go for the dog’s eyes, or strike at the back of its head, just at the base of its skull.

If you’re in the wild and you have a survival knife with you, the dog’s most vulnerable parts are under its front leg or just above its shoulder. Other tips include covering the dog’s head with a coat, which often subdues it, and lifting the dog’s hind legs up in the air, which stops it from manoeuvring effectively.

Almost one in five dog bites, no matter how severe, result in an infection. If you’ve been bitten, get yourself checked out at the hospital immediately.

A Post-exposure prophylaxis (PEP) will prevent the rabies virus from entering the central nervous system, which results in imminent death.

One Comment on “Surviving a dog attack: 5 important tips”