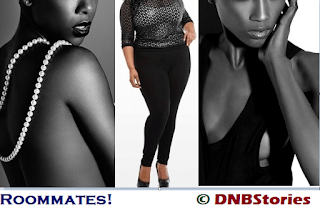 April walked out of the kitchen with a plate of sliced cucumbers.

Loveth was at the table pretending to read, Georgina on the bed, smiling at her phone.

April passed the plate and Loveth picked a slice of cucumber.

She came to sit on the bed, holding out the plate for Georgina.

‘Babe, abeg carry your plate, I no be goat,’ Georgina said, her smiling face focused on her Tecno Android.

April took back the plate. ‘What are you reading?’ she asked Georgina.

Loveth turned to glance at Georgina.

‘Just google DNB Stories and see for yourself.’

Georgina sent glaring eyes to April. ‘Babe, insult yourself o! Wetin you mean by that na?’

‘Mention three books that you have read,’ Loveth said.

Georgina started counting with her fingers. ‘Chike and the River, one. Eze Goes To School, two and Simbi, is that not three?’

April laughed so hard she started to cough.

Loveth shook her head, turning back to her textbook.

Georgina hissed and turned back to her phone.

April turned on the bed to face Georgina. ‘So tell me, where have you met Josh before?’

Georgina looked at her. ‘Babe, seriously, I cannot remember.’

‘Well, you had better start remembering fast. You literally embarrassed him yesterday.’

‘Hia! Shoo! How did I embarrass him by saying I think—think o—that I have met him somewhere before? How is that an embarrassment?’

‘Maybe because you couldn’t tell him where and when.’

‘Are you sure it is really him?’ April asked.

‘Nne, I’m very sure o. The face dey my head like poster, but I no fit locate the location.’

April shook her head in defeat.

Now Loveth turned to look again. ‘I’m not sure Georgina knows what she is talking about,’ she said.

‘Eh-eh, madam heartbreak, spare me. I’ve said it several times here that I have met him somewhere before. I just can’t remember where now, but seriously, wherever I have met that guy before wasn’t so good, I can tell you people that.’

‘How do you mean?’ April asked.

‘That’s all I can remember.’

April stared at Georgina and then pulled a face. ‘That one aside, I’ve been meaning to ask, where did you get money to buy generator?’

Before Georgina could open her mouth to reply April, Loveth added, ‘And why did you lie to us that your boyfriend is in America?’

‘Both!’ Loveth and April said at the same time.

Georgina scowled at them. ‘First, Abuchi is not my boyfriend. We are just friends.’

‘I love him!’ It appeared this flew out of Georgina’s mouth without notice. She quickly turned defensive. ‘What I actually mean to say is that—’

‘Forget it!’ April said, smiling. ‘I already have I want!’

Georgina turned back to her phone. ‘Na you know o!’

‘So now my question, where did the generator money come from?’

Georgina put one leg over the other. ‘But, Babe, wait o, are you by any means suggesting that I am broke?’

‘You are broke, Georgina!’ Loveth said. ‘It’s not a suggestion!’

‘April, warn this girl o! If I descend on her this evening, the remaining part of her heart the dog she was dating managed to leave will be gone o!’

Loveth hissed and turned away.

‘I am waiting for your answer,’ April said.

‘My brother in London sent some money,’ Georgina said.

Loveth turned suddenly to her. ‘You have a brother in London now too?’

‘What does he do?’ April this time.

‘He is a photographer.’

‘Yes, why?’ Georgina asked, her eyes on April in a wary way.

‘Please you need to hook me up with him.’

‘You want me to hook you up with my brother?’

‘Babe, they use men do you? Josh, Harry, and now my brother, ahn-ahn! Your kuwakpa na rubber?’

‘Don’t be silly!’ April said. ‘It wasn’t for any sexual relation. I just feel he might be of some help regarding my modelling career.’

Georgina was staring at April with flattened cheeks.

‘And just so you know, there is nothing between Josh and me.’

‘Keep deceiving yourself,’ Georgina said. ‘Each time I look at you two, all I see is a wedding.’

‘Well, your imaginations are terribly wrong.’

‘They had better be o! There is something very ugly hidden away in that fine boy.’

‘I don’t really know; let me not say the one I will say now and they will come and arrest me again.’

‘You’ve been arrested before?’

‘More than once sef.’

‘By the way, when is Harry coming back?’ Georgina asked.

April sighed. ‘Tomorrow he would say, and by tomorrow, he’d apologize and say next week again.’

‘He should do and come back jor before another man pack enter his flat!’

April’s lips curved in a small smile. Her mouth was open to say something when Loveth’s phone started to ring.

Loveth picked the phone and checked the caller. She quickly dropped it back to table, screaming ‘Liar! Cheat! A smelly, disgusting pig, that’s what you are!’

She rose and stormed off into the bathroom.

On the bed, Georgina’s mouth was wide open. ‘Is she alright?’ she asked April in a gossiping whisper.

‘What do you expect, she’s heartbroken.’

April gave Georgina a look. ‘She is just 20, you know that?’

Georgina’s lips burst open again. ‘20? And she is that big? Nawao. That means if I had started on time, my first child would be approaching her age by now.’

She stood. ‘No worry, I get better medicine for heartbreak.’ She walked to the TV and turned it on.

April was staring curiously at her.

She opened the DVD drive and slotted in a disc. With the remote, she selected the fourth song.

Beyoncé’s Irreplaceable come on on the speakers.

To the left, to the left
Everything you own in the box to the left
In the closet that’s my stuff
Yes, if I bought it, please don’t touch
And keep talking that mess that’s fine…

She turned the volume slightly higher and danced towards April.

She extended a hand to April.

April smiled and rose. She joined her in singing along to the song and twisting to the rhythm.

‘Loveth, this song is for you o!’ Georgina screamed.

Soon, the bathroom door opened and Loveth came out. She watched them for a while and then danced in and joined them.

When it got to the part – So since I’m not your everything
How about I’ll be nothing
Nothing at all to you
Baby I won’t shed a tear for you
I won’t lose a wink of sleep
‘Cause the truth of the matter is
Replacing you is so easy—Loveth sang through it with dramatic demonstration.

Later, Georgina asked them to shower that she’s taking them out.

‘Hmm,’ April hummed, pulling a face. ‘Where are you taking us to? Four Chefs?’

Georgina rolled her eyes. ‘Mm-mm, no be only Four Chefs, na Thirteen Waiters!’

People stared as they sashayed to the expressway.

They stood at the edge of the road, waiting for a taxi.

A beautiful black Jeep stopped in their front. The front window slid down. It was Mrs. Onwa!