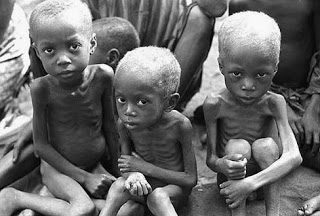 The food crisis unfolding in Nigeria’s northeastern Borno state is probably the worst in the world at the moment, with 4.5 million people in need of assistance, out of which one million are in danger of extreme malnutrition, according to Unicef.

“We haven’t found the right words yet to describe the magnitude of the problem,” said Arjan de Wagt, Unicef’s chief of nutrition in Nigeria, in an interview in the capital, Abuja on Friday. “I’ve checked with my colleagues in New York and they’re not aware of anywhere around the world where people are in this kind of situation.”

Aid workers first began to gain access to parts of the country’s northeast region in April, as government forces pushed back Boko Haram Islamist militants from many of the places they had occupied. Every subsequent piece of information coming from the area since then has only added to the grimness of the situation, De Wagt said.

The militant group has been on a violent campaign since 2009 to impose their version of Islamic law in Africa’s most populous country of about 180 million people. Tens of thousands of people have died in the violence and millions have been forced to flee their homes. An estimated 2.5 million people remain cut off in parts of the north of Borno, where insurgents are active, making it unsafe for humanitarian workers.

“People are completely cut off from trade routes and from aid, and they’ve not been able to plant,” said De Wagt. “Severely malnourished children have the risk of one in five dying. For these kids in Borno, the risk is much higher because they don’t have proper food and there’s no health care. That’s why we have a polio outbreak.”

The number of those approaching the most serious rank of a five-level malnutrition scale has increased steadily since early in the year, with at least one million “in severity level four” and another 75,000 people facing outright famine; the worst case, the Unicef official said.

With the emergency comparable to Ethiopia and Somalia about five years ago, according to Unicef there is an urgent need to intervene with assistance, particularly food with the right nutrients for vulnerable people such as children, pregnant women and breastfeeding mothers.

“The world and Nigeria doesn’t realise how bad this is,” De Wagt said. “In the area of food nutrition, if you look at the level and the indicators, I’m not aware of anywhere you have this magnitude and this number.”