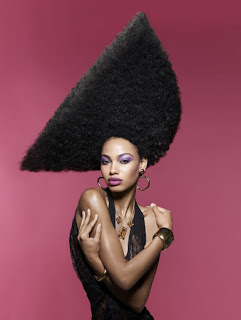 As I followed the recent protests at a South African girls’ school where students insisted on being allowed to wear afro hairdos to school, I recalled my own days as a student in what used to be one of Nigeria’s most prestigious boarding schools for girls.

In contrast to South African school hair diktats, at the Federal Government Girls’ College in Owerri in south-eastern Nigeria, straightening your hair was banned.

At unannounced intervals during the term, one of the school’s matrons conducted an inspection of each girl’s hair, then ran a sharp pair of scissors through any locks that she suspected of being chemically treated.

The consequence of rebelling against the school’s hair rules was a shaved head. All hair gone. Case closed.

Despite this drastic action against straightened hair, we were not allowed to wear our hair in afros. Neither were we to hold our hair up in a bun.

Hair was supposed to be natural, but it had to be either short or plaited.

My school didn’t have any 100% white students, but those of mixed race were also not allowed to leave their naturally soft and silky strands flying loose.

Like the rest of us, they were required to keep their hair in check.
‘School life is about unpalatable rules’

I wonder if the Pretoria High School for Girls had similar straightforward intentions as the authorities in my former school did.

Were they being racist or just overly disciplinarian?

A study of the school’s Code of Conduct document shows certain restrictions to what every student can do to or with their hair, irrespective of race.

The document goes beyond hair to include a ban on lip gloss, contact lenses and G-strings. Body art and jewellery are also not allowed.

I can imagine that a number of white students also felt constrained by these strict hair and miscellaneous requirements.

School life, after all, is about unpalatable rules and regulations.
Promoting national unity

As students in my Nigerian secondary school, we were not allowed to speak to each other in our mother tongues, another accusation which the protesters levelled against the Pretoria school.

Local languages were part of my school’s curriculum, but speaking them beyond the classroom was a punishable offence.

The whole idea behind the ban was to enhance national unity, to help us see ourselves more as Nigerians, rather than as Igbo or Yoruba or Hausa or any other of Nigeria’s 250 ethnic groups.

Like most wars across Africa, the Nigerian civil war of 1967 to 1970 was fought along ethnic lines, after the Igbos attempted to secede and form a new republic, called Biafra.

Boarding schools like the one I attended were established shortly after the civil war, specifically to promote national unity.

A quota system ensured that as many ethnic groups as possible were represented in each of these so-called Unity Schools.

For the first time in Nigeria’s history, children from every region had the opportunity to mix, to get to know one another beyond the fog of tribalism.

Allowing us to speak different languages would have accentuated our differences and possibly defeated the purpose.

Anyone hearing of my school’s ban on mother tongue languages may have automatically assumed that a colonial mentality was responsible for this rule, that they wanted us to be more English than the English.

Without understanding the vision behind the founding of our school, the policy may have come across as oppressive.

Beyond the protests and accusations, I would have liked to hear the Pretoria High School administrators explain the reasoning behind their policies.

Instead, hair rules at the school have been suspended by provincial authorities.

Without a doubt, racism is alive and burning in the hearts of many individuals and societies.

But there are times when we may need to look deeper than accusations of racism to see if other intentions exist, even in societies where race relations are known to be charged.

Adaobi Tricia Nwaubani is a Nigerian novelist. Her debut novel, I Do Not Come to you by Chance, won the 2010 Commonwealth Writers’ Prize for Best First Book (Africa)

3 Comments on “African schools and their strict hair rules”