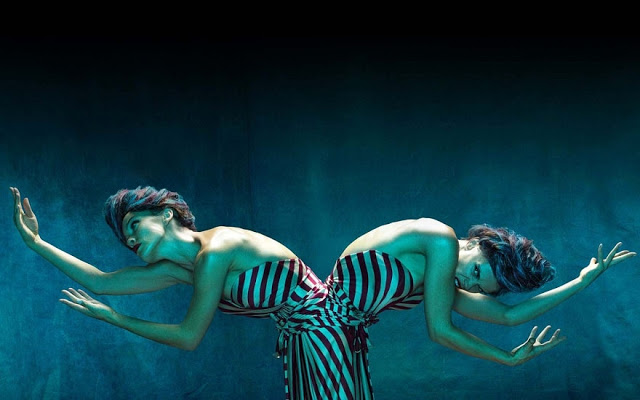 Daisy and Violet were conjoined twins born in Brighton, England on February 5, 1908.

The sisters were born pygopagi — i.e. conjoined twins in which the two individuals are joined at the posterior, most often back to back.

The sisters shared no internal organs and all that was truly uniting them was bone, muscle and skin.

Their birth name was Skinner however their impoverished and unmarried mother, Kate, could not fathom the responsibilities involved in raising a pair of girls joined together. She sold the twins to her boss and midwife Mary Hilton and they became known as the Hilton sisters.

It wasn’t long before the Hilton sisters were exploited for monetary gain, as their handler Mary Hilton was more interested in profiting off of their deformity than caring for them.

They became big time stars on the sideshow circuit, since at the time nobody had ever seen anything quite like them, and it’s said that Hilton pocketed all of the money they pulled in.

Much like Bette and Dot in American Horror Story, Daisy and Violet had their own personalities and even their own relationships.

Later on in their career Daisy dyed her hair blonde, to differentiate herself and spice up their act. Their act included singing and tap dancing, and they were needless to say the headliners everywhere they went. 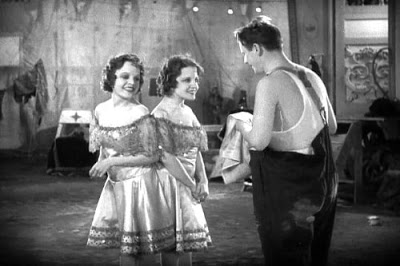 According to many sources, including the autobiography written by the Hilton sisters in 1942, Mary Hilton was a strict, physically abusive, exploitative and corrupt human being.

The twins were ‘trained’ and ‘groomed’ to sing and dance in the vaudeville tradition. While this training was in progress, the horrific abuse and dehumanizing continued.

When the girls finally began touring, they were seen as little more than possessions by the Hiltons.

The twins proved to be hugely successful and they toured extensively beginning at the age of just three.

On stage, the pair likely looked like dolls, their blond hair in curls and bows on their shoes. Violet played the piano while Daisy played the violin.

Billed as ‘The United Twins’, their tours of Germany, Australia and the USA often saw record crowds. 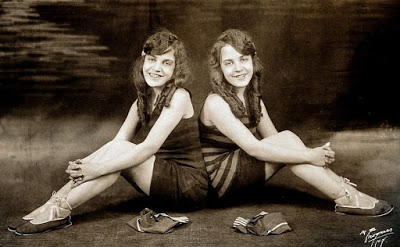 The twins brought in enormous amounts of money. Mary Hilton kept every penny.

When Mary finally died in Birmingham, Alabama, the guardianship of the twins fell to Mary’s daughter Edith and Edith’s husband, Meyer Meyers.

They were even worse than Mary as they controlled every movement the twins made.

They also proved to be poor agents as they insisted on keeping the girls ‘dolled up’ as little girls well past the age it was acceptable. Critics took notice and the twins were allowed to grow up, but only a little.

The mistreatment and corruption continued under the dictatorship of Edith. Edith purchased a mansion in San Antonio with the money the twins earned as a headquarters as the twins spent much of the 1920’s touring the United States on vaudeville circuits.

It was on these circuits that they met Bob Hope and their dear friend Harry Houdini.

Their popularity, at this point was near its peak and as a result they became subject to scandal.

The twins had befriended their advance agent, William Oliver.

Oliver’s wife Mildred was suspicious of the relationship and accused William of immoral acts with the twins.

A postcard from the twins signed to William ‘with love’ prompted Mildred to file for divorce and sue the twins for $250,000.

Oddly enough, this frivolous lawsuit was the catalyst for the Hilton’s freedom.

During a visit to San Antonio lawyer, Martin J. Arnold, the truth came out.

As the Meyer’s were out of the room the Hilton sisters told the lawyer of their life of abuse and captivity. The lawyer was flabbergasted and immediately took on the twins’ case. He took the twins into protective custody.

In April of 1931 Judge W.W. McCrory awarded a large sum of money – some reports say as much as $100,000, to the sisters and granted the pair their freedom.

The girls had spent 21 years in abject slavery.

Daisy and Violet became citizens of the United States and returned to show business. They hosted their own show, ‘The Hilton Sisters’ Revue’, and stared in the 1932 film Freaks.

Everything seemed to be perfect in the life of the Hilton sisters now; however the pair soon began to self destruct.

Due to too many years of solitude, suppression and deprivation the girl wallowed in, they soon came out of control.

They had numerous sexual affairs, legal problems, clashes with the media and a couple of short publicity marriages.

In 1936 Violet married gay actor James Moore as a publicity stunt. The marriage lasted 10 years on paper, but it was eventually annulled.

In 1950, the sisters appeared in their final film Chained for Life.

It flopped and the pair further failed in an attempted food franchise.

By the 1960’s the pair were nearly penniless.

The Hiltons’ last public appearance was at a drive-in movie theater in Charlotte, North Carolina in 1962.

Their tour manager abandoned them there, as the tour was a failure and he was tired of losing money. He left them without any money or transportation and the twins simply decided to settle in Charlotte. A kind grocery store manager hired the sisters to work in his shop, where they checked and bagged groceries.

On January 6, 1969, the twins failed to report for work and were found dead in their small home. According to a forensic investigation, they had died of Hong Kong flu, a 1968 flu pandemic which killed an estimated one million people worldwide.

They were buried in Forest Lawn West Cemetery in Charlotte.

They had no surviving family.

Despite the sad end to their lives, the memory of the Hilton sisters still lives on.

In 1997, a Broadway musical loosely based on the sisters’ lives, Side Show, with lyrics by Bill Russell and music by Henry Krieger, received four Tony nominations.

The Hilton sisters‘ story was also portrayed in the fourth season of the American horror television series, American Horror Story.

Excerpts of the above story taken from the book Very Special People.