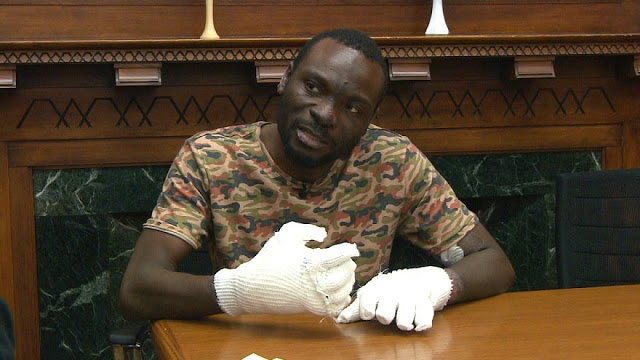 A Ghanaian refugee who almost died during a trek to cross the U.S – Canada border into Manitoba on Christmas eve will lose all of his fingers, a toe and possibly his arms.

“It’s very bad news,” Seidu Mohammed, 24, told CBC News in an interview at a Winnipeg hospital where he is being treated for severe frostbite.

Mohammed said he fled Ghana for the United States in 2015 because he feared for his life due to his sexual orientation, but when he arrived in San Diego, he was detained for a year.

He applied for asylum after his visa ran out but a judge denied his request.

“I run for my life,” Mohammed said.

He and another Ghanaian man, who he met in Minneapolis, decided to flee to Canada. The two of them took a bus to Grand Forks, N.D., then flagged a cab and spent $400 for a ride to a spot near the U.S – Canada border on Dec. 24.

“There is a big farm around the border and we passed through,” said Mohammed. “It was very difficult because when we stepped in that farm, the snow was [at] our waists.”

‘If not for [a truck driver], we would have died in that snow,’ Mohammed said.

For at least seven hours, the two trudged through snowy fields with the temperature hovering around the –18 °C mark, without the wind chill factored in.

They finally came upon Highway 75, near the Emerson, Man., border crossing.

The two men tried for hours to flag down trucks passing them by on the highway. A truck driver finally stopped and called 911 to get medical help for the men who were disoriented and cold. It is unclear how they managed to cross the border without being stopped.

They’ve both been in hospital since the trucker got them help, recovering in a specialized burn ward of Winnipeg’s Health Sciences Centre.

“If not for him, we would have died in that snow,” said Mohammed. “Nobody stopped till this Good Samaritan came along. God sent [this] man.… We were about to give up.”

Mohammed said he is grateful to the trucker who stopped and called 911.

On Monday, Mohammed and his friend met the ‘Good Samaritan’ for the first time since the morning of Christmas eve.

“He was crying. We all started crying because he saved our lives,” Mohammed said.

Mohammed is one of hundreds of refugees this year that have crossed the Canada – U.S. border into Manitoba between ports of entry.

According to the Canada Border Services Agency figures, there’s been a five-fold increase in the number of refugee claimants crossing between ports of entry in the past three years.

The Canada-U.S. Safe Third Country Agreement requires refugees to seek asylum in the first country they arrive, with a few exceptions.

Some advocates say the agreement is the reason refugees sometimes put their lives at risk sneaking into countries like Canada.

“If the Safe Third Country Agreement would be scrapped, then these people would not be risking their lives through the prairie open field,” said Bashir Khan, a Winnipeg immigration and refugee lawyer who has taken on the Ghanaian refugees’ case.

They’d be able to present themselves right at the border,” he said.

Mohammed has filed an application for refugee status. Refugee claims are typically heard by the Immigration and Refugee Board of Canada within two months.

He is hopeful he’ll be able to stay and work in Canada and is grateful for all the help he’s received from various groups, including the local Ghanaian community.

“I want to say thank you to all of you who show caring.”

Even though he was especially saddened by news from his doctors that he will lose a toe since he’s an avid soccer player, Mohammed said it’s a price he’s willing to pay for freedom and a better life.