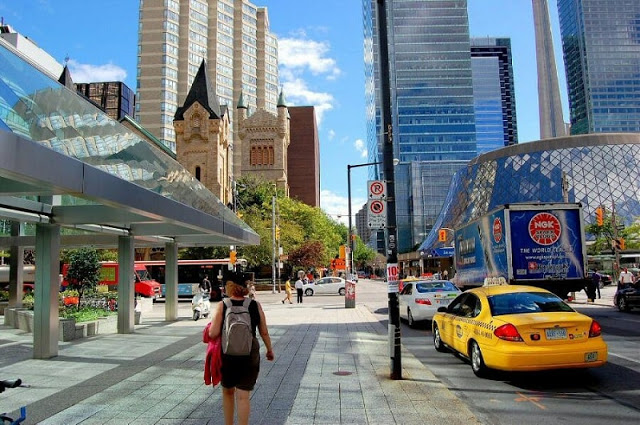 These are my views of Canada as a young African man, and I will try not to generalize.

The country above the United States.

So many people who I know don’t know the Canadian provinces. All they know are cities like Toronto, Montreal and other big ones. Because Canada don’t have much influence in these other sides of the world they tend to just to see it as ‘a country above USA’.

Personally I see Canada as a big country with less people.

I was shocked the other day when I read that Canada actually has a larger area than the United States.

Canada is considerably larger than the U.S., in sheer land mass…the entire population of Canada is about the same as can be found in the state of California.

Does this mean that distance between you and your neighbor is ten miles? Well, most likely!

This explains why most Canadians are very xenophilic.

Is it the government which is xenophilic or the whole population? Well, I have a couple of friends who were in high school as me, and almost all of them had parents who were able to secure professional jobs in Canada. Two of my freshman year classmates applied as ‘refugees’.

Why is it that many Canadian, and American, buildings are built of wood? I have asked this question so many times?

The reason I always get is that there is so much cold in these places. Well, I will accept that but I’d still like to know more.

Also about home and houses, I see this straight beautiful road going through an estate with magnificent wooden houses and perfectly mowed green grasses. Every compound have a driveway leading to a garage. And almost all of them have at least one floor up.

Using Google map all these compounds have swimming pools and a backyard.

I understand that Canadian cities are not usually overcrowded. There is also no waste pollution. And seeing buildings with old architecture makes it even more beautiful.

The modern ones are just a bonus.

By the way, I find the CN towers extremely so beautiful.

One can travel the entire Europe in less than 8 hours, but travelling from Iqaluit to Victoria Canada takes more than 11 hours, with stops anyway.

But this explains how huge this country is.

I travel in my country [Kenya] using some old Dash 8 turboprop plane and it only takes less than one and a half hours from East to the West.

Talking of Iqaluit, I think it’s the coldest place in Canada.

This is because I was watching Airbus plane testing in cold weather and it was in Iqaluit. I understand that Canada is a very cold country, mostly during the Winter.

Canadians love their flags too. The maple image means a lot to Canadians. They are patriotic.

In my country it’s normal to see Canadian embassy vehicles with this flag.

Also in International space station, the Canadian arm beautifully displays its flag and the name of the country.

At first I thought the Maple leaf symbol was ‘weed’. I was still young.

Canada is very forested. The place that humans occupy is less than the amount of space occupied by forests.

Overall, I know Canada is a very developed country with very developed infrastructure, and they have many similarities or slightly similar aspects to Australia than United States or Iceland or even the European countries.

I am an African and Kenya is my country.

I am 22 years old, a student and a curious being.

Though Kenyan, I can’t run marathon. I can’t even run one kilometer.

I love diversity and would like to make friends from all over the world.