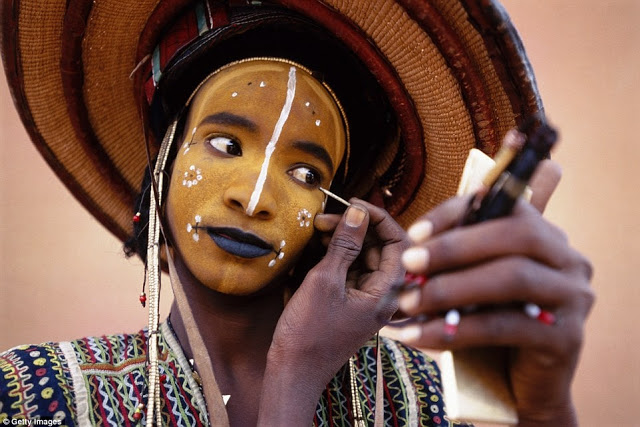 The Wodaabe are a small subgroup of the Fulani ethnic group.

They are traditionally nomadic cattle-herders and traders in the Sahel.

Known for their elaborate attire and rich cultural ceremonies, the number of Wodaabe was estimated in 2001 to be around 100,000.

The Wodaabe have a festival called the Guérewol Festival which calls for members of the tribe dancing at night.

The dancing is not so strange except for the fact that it allows men of the tribe to steal other men’s wives.

It doesn’t matter how long the woman has been married, once a man is chosen the tribe recognizes the new union as a legitimate marriage.

The new marriage is denied only on the grounds that the woman refuses or her husband catches the man while he is trying to steal the woman.

During the occasion, the men dress up and apply make-up on their faces (their faces are usually painted with red, white or yellow clay).

They then put on a mating dance in the hope of stealing another man’s wife, but the women have all the power.

To finish the look they put white ostrich feathers in their hair, which makes them appear taller – and they have a white stripe painted down their noses to make them look sharper.

The mating dance goes on for hours and its sole aim is to impress the female judges – who may take them as lovers.

The actual dance event is called the Yaake, while other less famous elements—bartering over dowry, competitions or camel races among suitors—make up the week-long Guérewol Festival.

Lipstick and beads may be associated with femininity in other culture’s eyes, but the ceremonial costumes aim to emphasize only the male beauty.

All through the festival, the men try as much as they can to prove their interest, stamina, and attractiveness to the judging woman.

The Wodaabe believe bright eyes, white teeth and a sharp nose make a man beautiful – and the make-up enhances these features.

The tribe believe they are the most beautiful people in the world, and the men carry mirrors at all times to check their appearance.

During the dance the men stand shoulder to shoulder and slowly move in a circle.

The men are judged by three of the tribe’s most beautiful women, chosen, normally, because their fathers have previously won the Yaake.

Each female judge gets to choose her own winner – and winning brings with it acclaim and their pick of women in the tribe.

Watching on are also the tribe’s most eligible women who are looking for their next husbands.

If they like a man, the women can choose to be ‘stolen’ by one of the better-looking men, leaving their husbands behind.

Those who wish to be stolen wait until their favorite man passes by and then tap them on the shoulder.


Once stolen the woman and the dancer can have sex and agree to become married.

The participants often drink a fermented bark concoction to enable them to dance for long periods. The concoction also reputedly has hallucinogenic and sex-enhancing effects.

There is a risk of losing one’s life when it comes to the
ritual of “wife stealing”.

Such love marriages can have fatal
consequences where the old husband disagrees.