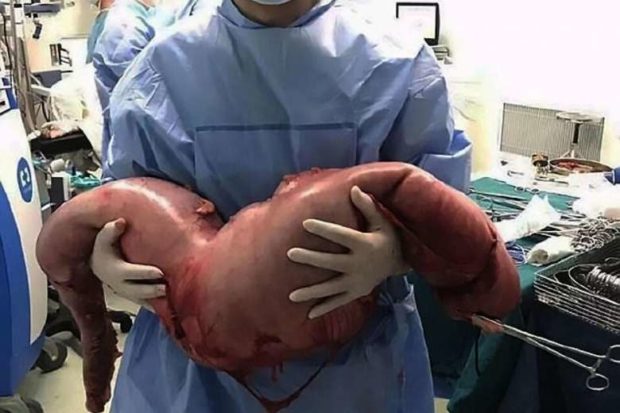 Doctors were forced to remove 13kg of feces stored in the colon of a man who was suffering from a rare bowel condition last Thursday, the Straits Times reported.

Zhou Hai, 22, had arrived at the Shanghai Tenth People’s Hospital with his belly so bloated that witnesses said he looked like he was heavily pregnant.

According to local media reports, Zhou was struggling to breathe and could only moan in pain.

A CT scan revealed that there were feces stored in his colon.

In a three-hour operation, surgeons removed a section of Zhou’s colon that measured 76cm long and weighed 13kg.

Zhou told doctors that he had suffered from constipation since he was born and took laxatives on a regular basis.

But his condition worsened in the three days before his operation, and Zhou was forced to seek treatment due to the severe abdominal pain.

Tests conducted indicated that the man had months – even years – worth of feces stored in a portion of his colon, which caused his abdomen to swell.

It was later discovered that he suffers from Hirschsprung’s disease, a birth defect that results in missing nerve cells in the muscles of a baby’s colon.

This causes blockages in the large intestine and requires surgery to remove the diseased part of the colon.

The disease is usually detected in infants within 48 hours of birth, but Zhou’s case is one of the few rare instances where it was discovered only in adulthood.

Those with the disease are prone to an intestinal infection called enterocolitis, which can be life-threatening.