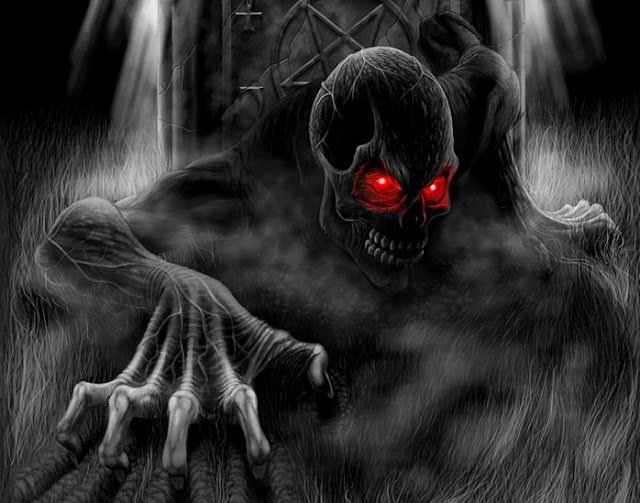 If by now you have not yet read Ola – The Tale of a Young Moon Maiden by Daniel Nkado, I don’t know what to tell you.

I really do not get it!

Below is the spectacular scene when Ola and her friends first encountered the Dark Witch of the forest.

The book is filled with so much adventure you will begin to wonder if there is ever any better way to unwind in life than burying yourself in a DNB Book!

The land ahead was open and hilly. Though some of the the hills had ample amount of short grasses growing on them, the whole area looked quite different from the other side of the forest that had tall trees, grasses and thick bushes all around. Another difference, as Azu noted, was that the air smelt fresher too.

They had walked several miles into the vast hilly region when they heard low flapping sounds in the distance. They turned and looked up. A shape like a huge bird was flying toward them, but as the creature approached, they discovered it was no bird. No bird could have grown that size and still was able to fly, and the wings too, they were long and membranous—more like a bat’s.

“What’s that?” Onyema asked. He placed his hand on his forehead in order to see well.

“E-v-i-l!” Boju screamed, with such quavery voice one could easily discern the extent of his fright. “We must run, mistress, run!”

He grabbed Ola by the hand and drew her forward as he ran. “I thought you said we are safe on this side?” Azu asked as they ran.

They ran fast, but their legs were no match for the winged creature. It soon caught up with them and landed in their front.

“It’s her!” Boju screamed. “She has trufly grows wings!” He ran behind Ola and hid.

“Oh yes, my dear one,” the winged woman said, walking close to them. “An old witch was kind enough to lend me hers.” She turned and took one last peep at the pair of wings with an expression close to what to be expected from a woman who had just gotten a new set of jewelries before they folded up behind her back. Ola recognized the wings, they were those of the creature Amagba had turned into then. But strangely, unlike the witch that turned into a winged creature, this woman had grown them on her back.

The woman stared down at Boju. “Your treachery, however, will be the story of another day.” Her voice held a well-camouflaged note of menace. Boju raised his face and peeped at the Dark Witch. He cowered back behind Ola again.

Ola and her friends only stared as she turned to them. Probably because she looked prettier than they had imagined. Or maybe because they hadn’t expected they would be meeting a queen instead—an ancient queen though, like one that reigned many years ago, judging from her outfit and hairstyle. The whole mass of her dark and long hair was packed and twisted into a fat braid that ran around the shape of her head and her bead-studded crown fitted tightly around it. She wore a sequined black gown which took up her full figure well. Ostentatious jewelries adorned the rest of her body; strings of glass-bead necklaces hung around her neck, golden earrings dangled from each of her ears and her wrists were stuffed full of wood bangles. Like a royal queen she really was, she wore white anklets on each of her ankles too. Her dark complexion was flawless.

“Who are you?” Onyema was first to ask.

She turned gently to him. “I am Agbalakibie, the great queen of this forest.” She spoke no less like a queen too. Her voice was smooth, slow and calm.

She looked round their faces, a slight expression of puzzlement creeping into her face. “Well, you know,” she continued, her eyes prowling round their faces, “there was a time people were beheaded instantly for not bowing for the queen.”

She kept her eyes steady on Ola’s face for a while, and then turned away. She fingered the bangles on her wrist. “But well, since they have all learned to cooperate or should I say all the rebellious ones had already lost their heads, I had not had the opportunity to witness yet another head-removal for a very long time now.”

She glanced round their faces again and then gave a languid wave of hand. “Oh, don’t look so frightened, my little dears,” she said. “I never liked the sight that much too.”

She winced. “All those red liquid spurting out as the head rolls down the block—” She broke off and looked up as if to remember something. She shook her head slightly and touched her chest. “Ah! My Amadi sure knew how to cut off heads, quite a master of the axe he was.” She let out a small chuckle and waved again. “Not to worry, dear ones, I have decided to consider you a-l-l—” She paused for a brief, suspense-filled moment. “…friends!” She smiled, in the way someone who had just done a group of people some huge favour would do. Only this time, neither of the beneficiaries looked any too pleased in their faces.

She took a few graceful steps to Nene and Ola’s front. “Now which one of you is the moon maiden?”

Neither of the girls said a word.

She smiled again—the frequent smiles that got them wondering if this woman was truly the Dark Witch. “Ahaa! The fair one, I see,” she said, nodding and smiling at Ola.

Ola wondered how she got to know. Of course Boju had given her away when he ran to her back for safety. Agbala reached to touch Ola at the cheek and she shoved her hand away. Her nails were long, very long, but neat. She made an unconcerned expression of the face as she gracefully took back her hand. She drew back slightly. “Follow me, all of you, to my palace and have yourselves duly entertained,” she said. “We shall have a nice long chat together after you are all refreshed.”

“We are not going anywhere with you, witch,” Azu said.

The fading smile disappeared from Agbala’s face at once. She probably couldn’t fully conceal her annoyance, but she tried anyway. “You dare refuse the queen?” she said, turning to Azu.

“Stay away from us,” Ola said. “We are not going anywhere with you.”

They watched in gut-wrenching apprehension as she drew further back from them.

She closed one of her hands into a fist and pushed it out in the air, looking round them, as if to pick who her victim would be. And then she set it toward Nene. Nene clutched her neck and began to choke, like someone being strangled, only this time the strangler was nowhere near her victim.

But Agbala did not look anything bothered about Nene’s life. Determinedly, she continued squeezing her fist and Nene choked the more, making deep coughing sounds.

Onyema pulled an arrow and aimed, but Agbala sent him flying into the air before he could shoot, with her eyes! They had turned red. Neither of them had seen where somebody did magic with the eyes before.

Azu drew his sword and rushed forward, but he snapped still when Agbala shot him another red look.

“A step a further and your friend dies,” the woman said, her voice now deadly. It was hard to reconcile the now raging woman with the queenly one they had met earlier.

Ola saw Nene’s eyes were almost popping out of their sockets. Confusion and grief marred her face. “What do you want?!” she yelled.

“Follow me quietly to the palace,” Agbala said. “They can continue with their whatever journey without you.” She squeezed her fist again and Nene dropped to her kneels, a thin line of saliva hanging down from a side of her mouth.

“Okay, stop!” Ola screamed. “I will go with you.” Agbala turned to her with a suspicious look.

“No, mistress, please don’t go,” Boju cried. “She sucks out your powers and she turns more powerfuls. Like she does to the ugly witch.”

“I said I will,” Ola said again, ignoring Boju. Agbala released Nene and the others rushed to her.

She held out her hand to Ola. “Shall we now then?”

Ola walked slowly to her. But before she could reach to take her hand, Boju pulled Azu’s sword and plunged it into Agbala’s thigh. Agbala shrieked in pain and waved little Boju far off into the air. Boju thumped hard on the solid ground with a deep moan. She pulled the blade out and flung it aside. She turned to Boju in rage, her eyes red and her face suddenly darker.

Onyema shot at her before she could reach Boju and again she shrieked and pulled out the arrow from her arm. She turned to Onyema, looking even deadlier. She hadn’t completed two steps to meet Onyema when she heard her name. “Agbala!”

She turned back to see the two women standing atop the hill, both of them dressed in white wrappers and a white scarf neatly wound round their heads.

“The white sisters,” Boju screamed, his mouth agape. He managed to his feet. “Y-e-s!”

“You dare toddle across this side?” one of the women asked Agbala as they walked down the slope, holding hands.

Agbala pulled a contemptuous face. “I am the queen of this forest, I choose to go wherever I want.”

“Forget your useless truce, I am queen!” Agbala retorted.

“Depart at once or have yourself in ruins,” the women said.

But their threat only amused Agbala and she snorted with laughter. “You can’t do anything to me, dear women. I remain indestructible.”

“Move away!” Agbala yelled. She burst toward them. The sisters raised their joined hands in the air, closed their eyes and began reciting an incantation. A great wind came. Ola looped her arm around her face as the wailing wind surged past. Agbala’s wrapper fluttered in the wind and she halted, halfway to the sisters. She jerked back, as if something hit her. She eventually shrieked in pain and flew off.

The women opened their eyes as the wind dropped. They turned to Ola, an angelic smile spread across their faces. “May your light fall upon us, blessed one,” they said, bowing.

“You are the one true light, my child,” one of the women said.

“Who are you, beautiful women?” Onyema asked, her rapt eyes on the women.

Boju’s hand flew to his head. “Oh no,” he scoffed. He obviously hadn’t expected the prince would ask the women that question, or look at them the way he was doing.

“We are the white sisters,” the other woman, the fairer one, replied. As the other, her voice came out equally melodious. “We are the true servants of light.”

Onyema’s face showed how surprised he was to learn that the women had recognized him. From his face, it looked as though they reminded him he had been a prince.

Ola and her friends followed the sisters.