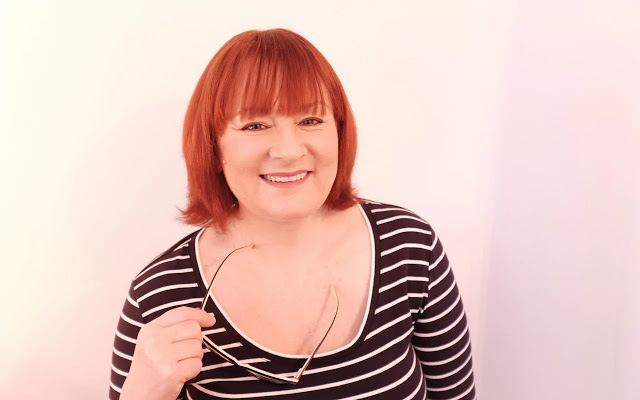 Before her passing, award-winning English novelist Sue Margolis started a column for The Telegraph to document her journey with cancer.

Unfortunately, Sue became too ill to continue writing, and only the first few columns from her were published.

Read her first 2 columns below where she talked about the shock of her diagnosis:

On Christmas Day 2016, I cook lunch for a dozen people. I spend the days before schlepping geese, spuds and bags full of seasonal goodies up two flights of stairs to our new flat – without feeling particularly breathless. I’ve had a bit of a cough since the summer, but only after meals and two GPs at the surgery where we used to live put it down to my acid reflux getting worse.

I spend a few minutes after Christmas lunch hacking up phlegm in the loo. Bloody reflux.

Early in the New Year I make an appointment at our new surgery. This time, I am sent for a chest X-ray. I’m barely out of the hospital when I get a call from my GP. They’ve found something on the x-ray. It could be nasty … doctor code for cancer. My dad died of lung cancer. But he was a smoker. I’m not.

Somehow I manage to drag my emotions through the next few days. By the end of the week I’m in hospital having a bronchoscopy. This involves ramming a tube down my windpipe in order to harvest a sample of lung tissue. Refusing sedation turns out to be a big mistake. I’m drowning, gurgling and gasping for air. This is what water boarding must feel like.

The possibly malignant tissue goes off to the lab.

A few days later the nice middle-aged lady consultant leans in towards me as she breaks the news. Stage four lung cancer – the type non-smokers get. It has spread – albeit minimally – to my hip and spine. It’s inoperable. Without treatment I will be dead in three months. I don’t look at my husband, Jonathan. I have no idea of the expression on his face. I’m too busy trying to stop myself passing out. As the light-headedness fades, my questions start.

Does anybody come back from stage four?

OK, a straw to cling to.

Chemotherapy – the type that doesn’t make your hair fall out.

Chemo might give me two years. That means that give or take a Tuesday I’ll be dead at sixty-four. I won’t see my two grandchildren grow up – or even start school. That’s when the tears start rolling.

Our youngest daughter, Ellie is waiting in the hospital café. She’s texting on her phone. In a moment I’m going to break her heart. Jonathan grips my hand and tells me he loves me.

“It’s not good,” I say, opening my arms to my daughter.

We hold each other. She bursts into shoulder heaving sobs. I remain dry eyed. “Come on, it’s OK. I haven’t karked it yet. I’m still here.” Still a mum. Still protecting my baby.

J calls our son, then our eldest daughter. She lives in New York with her husband and the grandchildren I’m so desperate to see grow up. I step away, choosing not to hear what he says, or how the kids respond.

We walk towards the hospital exit in silence.

As soon as we get home, I Skype Ruth in New York. My first baby is knocking on forty, but to me she still looks about eight … that pretty little face straining not to break into sobs. She tells me she loves me, that she hates not being here. Maybe she should fly over.

“If you want to come, of course you must come. But what would you do? And to be honest I think the kids would be a bit too much for me just now.”

We agree that she should stay put for the time being.

That evening David, his fiancée and Jumble the cockapoo rock up with hugs and many licks. We drink Scotch and I start musing about whether I’ll live to finish the giant tube of Colgate I just started.

By the end of the following day all our close family and friends know what’s happening. My phone doesn’t stop ringing. Texts and emails are arriving every few minutes. Flowers are delivered. Some close friends send a crate of wine. A couple of people phone sounding like undertakers forced to take a pay cut, but mostly peoples’ messages are spot on. They’re along the lines of: ‘This is total effing crap… meanwhile that bastard Trump gets to be president.”

Meanwhile my girls have got me a badge which says: ‘Cancer is a C**t.’ I love it and I love them for knowing me so well and what will make me laugh. They insist I wear it to all my treatments.

It goes without saying that beneath my gallows humour is a thick layer of panic and fear. I spend my days lolling on the sofa like a romantic poet with consumption. Whenever I think about dying, I’m reminded of when I was a kid and I used to lie awake at night trying to imagine infinity.

It caused pandemonium and panic in my brain. The same happens now when I think about ceasing to be. What’s more, as an atheist, it sucks not being able to look forward to the afterlife. Oblivion doesn’t have quite the same allure as eternal bliss and resurrection. I’m considering downgrading to agnostic.


Column 2: ‘I start to realise that lottery wins come in all shapes and sizes’

An oncologist friend has recommended a cancer trial. Calls are made and a couple of days later we rock up at the trial HQ.

The doctor in charge tells us about immunotherapy – which I’ve read a bit about in the papers- and the jaw-dropping results it’s having on certain types of cancer – mine included. The theory is that some cancers are caused by the patient’s faulty immune system and immunotherapy gets it on track again. There are few side effects.

My response is, OK, when do we start? Turns out it’s not that simple. First there’s my PDL1 to consider. This is a vital bio-marker. If I don’t possess it – and most people don’t – the drugs won’t work. Then I have to have a load of scans and tests to show that apart from a spot of stage four, terminal lung cancer I’m otherwise fit and healthy.

After the consultation, Jonathan is virtually skipping down the street, crying hallelujah and singing What a Friend Have We in Jesus. I’m about to be saved. My husband’s blind optimism, his belief that no matter what he’s up against, his cup runneth over, is one of the reasons I love him. But this reaction is just plain daft.

“Are you serious? There is no way I’m going to have this stupid PDL1 thing. And even if I do I won’t pass the medical tests. By now I’m probably riddled with bloody cancer.”

Still blissed out, he hugs me and tells me to shut the f*** up.

For the next week, I neck much valium. Finally the call comes with my test results. The scans reveal I’m basically in good shape. Plus I have a strong PDL1. The oncologist says the lab people have written the word ‘strong’ in capitals. I’m on the trial with knobs on. Jonathan’s all I-told-you-so. I start to realise that lottery wins come in all shapes and sizes. We allow ourselves a glass of Champagne to celebrate.

A few days later I notice that my right leg has started to swell. Ruth – who has arrived from New York for a flying visit with our granddaughter – is worried. She’s read that lung cancer patients are prone to deep vein thrombosis. Ever since my diagnosis, she has immersed herself in everything lung cancer related. She’s awesome. It’s like having a doctor in the house. I should get myself to A&E right away. I leave it a few hours to see if there’s any improvement. There isn’t. My calf is solid. My leg is turning purple.

Jonathan isn’t around so son David drives me to the hospital. They have all my notes and I’m assessed straight away by the triage nurse. She agrees it could be a DVT. I am sent to another waiting area.

He tells me to take it easy, but I can tell he’s bricking it. Everything is made worse because I’m sitting on a small hard chair with nowhere to rest my leg – which even with my limited medical knowledge I know should be raised. An hour passes and then another. By now my leg is turning into a great mottled tree-trunk. I’m really frightened. I throw up into the wash hand basin behind me.

Five minutes later a junior doctor is introducing herself. It’s probably a DVT, but they can’t scan me as its Saturday and the unit doesn’t operate at weekends. She will give me some tablets to thin my blood and I should come back on Monday. David loses it. I watch him pull himself up to his full five foot eleven and get in the woman’s face.

It’s impossible to believe this man with his hipster haircut was once the eccentric, precocious little boy who used to live on his favourite undercooked fish fingers and chips, which he liked to call floppers and floppers … that this is the same person who, aged nine wrote and illustrated a book called Simon’s Magic Toes, demanded we find him a literary agent and went off to the train station to get himself some business cards printed. They read: David Margolis, kids’ book writer.

“No bloody way. You are not sending my mother home in this state. Look at her leg. Plus she’s got lung cancer. She needs to be admitted.”

Cowering now, the junior doctor consults her boss. I am admitted. On Sunday – despite the weekend rule – my leg is scanned. The clot is huge, running from my groin to my foot. My only thought is that my chances of being accepted onto the trial have been well and truly scuppered. Demented old ladies wander the ward all night mumbling and wringing their hands. I sob my heart out.

The next morning a middle-aged jolly hockey-sticks doctor presents herself at my bedside. “Right you,” she booms, “ I want you on your back, legs up resting against the head of the bed.” I practically salute as I obey. For the first time in twenty-four hours I feel safe. Doctor F pats me on the shoulder and says give it a couple of months and I’ll be on the mend. And she’s checked … it won’t get me kicked off the trial. I want to hug her.

That afternoon the entire family comes to visit. It’s granddaughter Dalia’s fourth birthday and we’ve bought her the most magnificent fairy castle cake. Ruth gets permission to bring it and candles onto the ward. Dalia climbs into bed with me and squeals with excitement as the candles are lit. What larks, having her birthday in hospital with her meema. The entire ward sings Happy Birthday. The girls hand out cake on paper plates and I remember a saying – something about taking joy from lower hanging fruit.