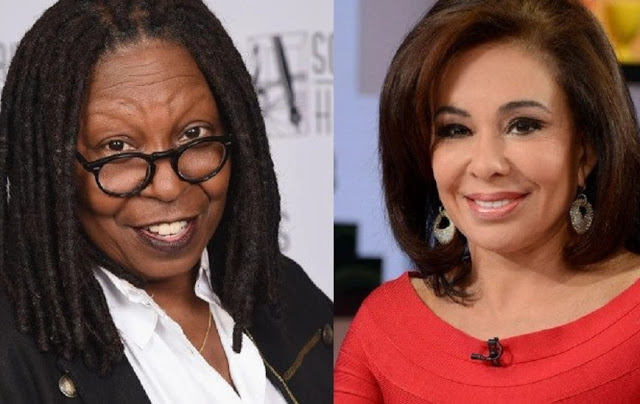 There was a bit of drama between Whoopi Goldberg and Jeanine Pirro on Thursday’s segment of The View.

The Fox News host had stopped by to promote her new book, Liars, Leakers, and Liberals: The Case Against the Anti-Trump Conspiracy, and things started out normal.

Pirro defended everything Donald Trump, blaming Barack Obama for basically any current problem in our country.

But the fireworks started when Pirro mentioned “Trump Derangement Syndrome” and appeared to point at Goldberg.

“Did you just point at me?” Goldberg asked.

“Listen, I don’t have Trump derangement, let me tell you what I have. I’m tired of people starting a conversation with ‘Mexicans are liars and rapists,’ … Listen, I’m 62 years old, there have been a lot of people in office that I didn’t agree with, but I have never, ever seen anything like this. I’ve never seen anybody whip up such hate. I’ve never seen anybody be so dismissive … What I suffer from is the inability to figure out how to fix this. That’s my issue.”

Goldberg attempted to bring the discussion back to Pirro’s views, asking her about the “deep state.”

“How long has the deep state been there and who’s running it?” The View host asked.

But Pirro didn’t answer. The two got into a she-said, she-said spat before the Fox pundit shouted, “Whoopi, you know what’s horrible? When people who shouldn’t be here end up murdering the children of American citizens.”

“You know what’s horrible? When the president of the United States whips up people to beat the hell out of people!” Goldberg replied as the two continued to talk over each other.

But Goldberg was fed up. “Say goodbye!” she yelled to Pirro. “Bye. I’m done.”

Pirro can be heard saying “wow” as the camera cuts to a commercial break.

When the show returned — sans the Justice With Judge Jeanine host — Goldberg explained her actions.

“Welcome back. So, you saw me do something I very rarely do. I very rarely lose my cool and I’m not proud of it, I don’t like it,” she said to the camera.

“But I also don’t like being accused of being hysterical because that’s one of the things I try not to be on this show. So … have a great day.”