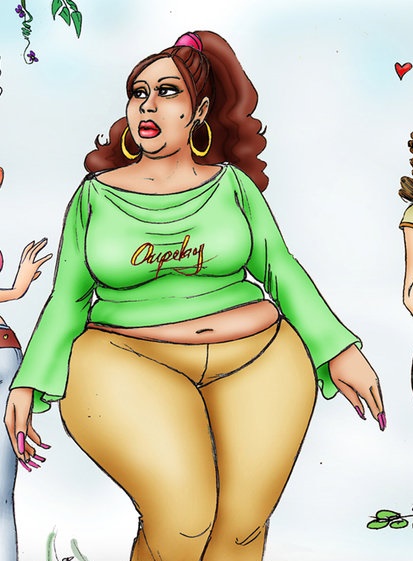 This story contains STRONG LANGUAGE and may not be suitable for young readers.


I met her hips many minutes before meeting her. Like two giant roller balls they rotated in my front, momentarily flushing out all awareness from me.


I followed her to the junction even though that wasn’t my direction. I suspected she sensed I was following her, the way her rotating waist suddenly changed velocity.


At the junction I stood aside pretending to wait for a bus while praying hard hers didn’t come.


After another ten minutes of watching her wonder hips the sun’s heat restored back my senses and, finally, I realized myself and started to walk back.


I didn’t stop immediately. I wanted to be sure it was for me.


I turned and here she was, the big-hipped lady, waving at me to come closer. For a second I thought it was my imagination playing me.


‘Good afternoon, Ma.’ I was now standing in front of her.


‘Good afternoon, handsome, how are you?’


She stared at me, smiling a smile that was difficult to understand. I stood there, twisting in awkward silence.


Finally she said, with this knowing smile, ‘I know you were following me.’


I wilted in guilt. ‘I –I am sorry,’ I muttered, not knowing what else to say.


She nodded, still smiling—that kind of half-formed smile that stay on people’s face when they are thinking about something else.


Without another word she thrust her big handbag into my hands and turned to walk back the way she’d come. I didn’t know what to do. I quickly followed her. ‘Ma?’ ‘Madam?’ ‘Ma, I said I was sorry, I didn’t –’


She turned and gave me this large smile. ‘Don’t worry, handsome, you are not in any trouble.’


There was something about the way she called me handsome, something so stimulating I could almost feel a reaction in my groin. Or maybe it was just her hips. They now seemed larger, rounder, more rousing.


With desire streaked with apprehension I followed the big-assed woman till she turned into a compound I presumed was where she lived. She was well known by her neighbours. ‘Mummy Kemi, welcome.’ ‘Mummy Kemi, you are back so soon?’ ‘Mummy Kemi, wetin you buy?’ They all seemed to have something to tell her. But in all their garrulity one could sense, somehow, how much they gossiped about her.


Mummy Kemi barely responded to any of them as she walked past to her door. She opened the door and asked me to come in.


I stepped into the room and she quickly bolted the door. The room was cramped but neat. The high mattress took a greater space of the room. Other items; a tall white refrigerator, a plastic cupboard, wooden shoe rack, etc., surrounded it.


She took the bag from me. ‘Thank you, handsome.’


Now that she collected it from me I realized how heavy the bag had been.


‘Do you care for anything?’ she asked me.


As though she hadn’t heard me, she leaned over and opened the tall fridge.


She gave an eye.


‘Good.’ She stood and, facing the wall, she pulled off her brown blouse.


I tried hard not to look but it wasn’t easy, the temptation. I saw the black strap of her bra and quickly turned away.


When I summoned up courage to look again, what I saw momentarily froze me. There they were, the two roller hips, now completely bare, naked, staring back at me.


I regained consciousness only to find Mummy Kemi on top of me, unbuttoning my shirt. ‘I know you’ve always wanted me,’ she was muttering, her fingers freeing one small button after another. ‘I see the way you always look at me whenever I pass your mother’s shop. I see the longing in your eyes.’


I kept saying yes, as if that would ensure she didn’t stop.


Thankfully she didn’t. But she wasn’t absolutely gentle. When it appeared the last two buttons had turned non-cooperative she held the shirt and jerked it away, tearing off the stubborn buttons. In the same aggressive manner my trousers followed.


Now fully naked on the bed I became embarrassed to see just how small I was compared to this big woman. My only compensation came from the dude between my legs. Mummy Kemi would later tease me that alone, my dick would weigh more than my whole body put together.


Like a falling tree, Mummy Kemi landed on the bed back first beside me. I was swung a few times before the mattress settled. With one hand she lifted me onto herself.


And my work began. We didn’t have sex. I did manual labour.


For over two hours I sucked on her tits, big hard tits the size of palm nuts. When she finally released me was to push me down to between her massive thighs. And there, right in the depth, I was buried for another thirty minutes, or so.


And then Mummy Kemi heaved left and put her hand behind the mattress. She threw the pink box of Gold Circle to me. I wasn’t fast enough to catch it and it hit my arm and skidded off. I quietly picked it from the floor.


It had been very surprising how she controlled all the actions from the bed where she just lay like a queen termite.


She made this canine-like sound when I first slid into her. Settling in, she barked again. And then as I took her in quick energetic thrusts, she continued to whine. In the sounds I saw reward for all my work, and so I vied to see them intensified. And it happened. But I didn’t keep up for much too long. To both our disappointment, I began to vibrate uncontrollably and before I could realize what was happening I had poured.


I could see the disappointment on her face as I pulled out of her. I pulled off the filled condom and lay on the bed beside her.


‘Have some rest, handsome, and we will continue,’ she said to me.


I nodded, trying hard to restore my breathing to normal.


Barely five minutes after I dropped to the bed, Mummy Kemi lifted me onto herself again.


We were on the third round when this nasty knock landed on the door. I was terrified. Only the owner of the house would have the confidence to knock like that. My dick went limp inside her. Nothing kills sexual appetite as fast as fear.


‘Mummy!’ I heard a voice call from outside. ‘Mummy open this door right now!’


Mummy Kemi frowned at the voice. Turning to me, she said, ‘Don’t mind that little boy, continue jor.’


‘Open this door!’ One more knock.


‘Okay na, you will not open abi?’ And so both the knock and the voice disappeared.


Slowly I called back my desire and managed to complete the task.


We had another round before I told Mummy Kemi as she lifted me onto herself for the sixth performance that I am exhausted. She smiled at me with pity and called me a small boy.


She struggled up from the bed.


I was wearing back my clothes while she tidied up the room. She picked all the used condoms and tied them in a black plastic bag. She gave it to me to throw away on my way out.


‘Come next week,’ she said as she opened the door for me.


At the compound entrance I met terror. Four boys, sixteen to eighteen in age as I estimated, each armed with long, wavering canes. They quickly circled me. I don’t know how long they’ve been waiting there for me to come out.


I couldn’t tell now which one of them was Kemi. The Kemi I had in mind was a boy not any older than fourteen. These boys were huge. Never knew it was possible for boys to look so young and so huge at the same time.


Without warning the tallest boy delivered the first strike. It tore across my back like fire. I screamed. ‘Mama Kemi nekwa Kemi nwa gi achoola igbu mmadu o!’


I knew Mama Kemi would not hear. Her room was at the extreme end and I was pretty sure she’d either dozed off on the bed or gone to the backyard to have her bath.


The few neighbours that ran out stood aside watching as if it was a performance.


‘Kneel down!’ It was the tallest boy again. I had guessed now that he was the Kemi.


‘What is that you are holding?’ he asked.


I enclosed the plastic bag in two hands. ‘It is—it—it is the akara I bought on my way here.’


‘Open it my friend!’ The boy that spoke now had the meanest face of all of them. He looked oldest too.


Slowly I unwrapped the bag. If I was to ask God for anything at that time, it would be a miracle to turn sagged, cum-filled condoms into hot balls of akara.


‘Hey, Ekemini, condom!’ one of the boys screamed before I could even finish unwrapping the bag.


Ekemini used his stick to check the content of the bag. ‘Now eat them,’ he said.


‘Are you deaf? Start eating the akara you bought na!’ He raised the stick, threatening to strike.


I picked one soiled condom and put in my mouth. As soon as the sticky liquid touched my tongue I spat it out at once. Never for once have I tasted something so nasty. I threw away the rest.


The boys read my decision—I have chosen their sticks over the condom meal. And they gave me a generous donation of it. Like a mob attack these boys thrashed me without mercy.


Next I opened my eyes I was in the hospital with all my body hurting like I was incised all over with razor.