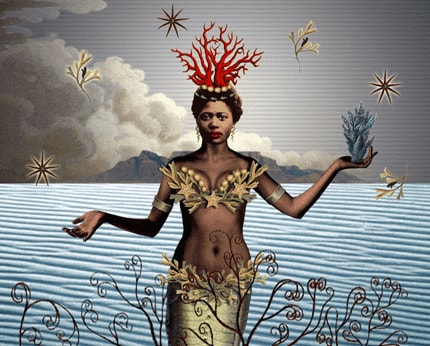 Ogbaru Lake was not to be visited at night. The lake goddess came out with her maidens to bathe at night.

Every native of Ogbaru knew about this.

Agnes and her mother were new in Ogbaru. But that didn’t mean they haven’t heard the story too. It was a common story everybody in Ogbaru told newcomers.

Do not go to the Iyi at night!

It was a calm Wednesday night. Agnes and her mother returned late from the mid-week service. At home, all the water containers were empty.

Not a single drop of water in the house.

Agnes dropped her Bible and hymnal on the TV table and carried the yellow jerry can in the corridor.

‘Ebee — where to?’ Mama Agnes’s voice came from her room. She was undressing.

‘To the lake, Mama,’ Agnes answered, already stepping out into the night.

‘Agnes, drop that jerry can and come back here!’ Mama Agnes abandoned her undressing and came out to the corridor in her bra and wrapper.

‘Mama, but there is not a single drop of water in the house.’

‘Come back! Go to Okwudili’s house instead; surely he’d be kind enough to borrow us some water.’

Agnes shook her head. ‘Let me go to the lake, Mama.’

‘But Mama I don’t want to go to Okwudili’s house.’

‘So you’d prefer to face the lake goddess than go to a man’s house for water, eekwa?’

‘You are very foolish girl! Enter the house! Go to Okwudili’s house, tell him I said he should borrow us some water!’

A very reluctant Agnes dragged back into the house.

Ten minutes later, she stepped into a quiet compound. Okwudili’s compound. It was as quiet as always.

She clapped and called out, ‘Kpam-kpam!’

A goat bleated from a nearby shed. An electric bulb glowed murky yellow in the veranda.

‘Kpam-kpam!’ Agnes’s voice pierced the quietness of the night again.

Above her, the moon was only a tiny white curve stranded in a great stretch of black.

Inside the house, Okwudili, a limping middle-aged man, drew part of the window curtain aside to see whose voice had woken him from sleep.

And he saw it was her.

He quickly opened the front door and asked her to come in.

‘My mother sent me,’ Agnes said. ‘She asked me to tell you to please lend us some water.’

‘Of course, of course,’ Okwudili said eagerly. ‘Please sit while I go in to carry a container out for you.’

‘Thank you, sir.’ Agnes sat on one of the sofas in the sitting room.

But Okwudili did not carry out any water container for her. When he came out to the sitting room again, he was stark naked with the thing between his legs long and erect.

A startled Agnes flew up from her seat and made for the door.

But he grabbed her the same instant, his palm slapping firm into her face.

He pulled her back to the center of the room and fell on top of her.

This was his only opportunity to fulfill the sick plan he’d borne in his filthy mind for months. He would dare not allow it slip past.

Satisfied and calm at last, he released the young girl and rose.

16-year-old Agnes lay sprawled and lifeless on his carpet, red stains all over the place.

Startled and confused, the sick man lifted the dead girl onto his back and crept down to the lake.

Everywhere was still and quiet; no one visited the Iyi at night.

He walked down the bank and threw the dead girl in.

In the morning, when a hunter found Agnes’s floating body and people gathered, her mother kept on wailing, ‘I told her, I told her! I warned my daughter not to visit the lake at night! The lake goddess has taken my daughter!’

17 Comments on “Flash Story: The Gods are Not to Blame”