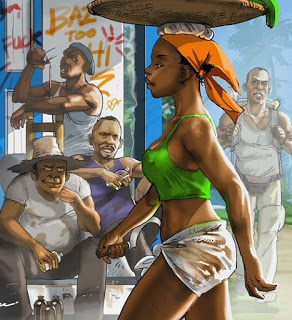 I met Olajumoke three years ago. She sold bread for a living in Lagos. We got talking about bread. She told me that her customers were complaining that the price of bread had gone up for no reason. She didn’t bother to explain to them because they wouldn’t make any sense of it, but as a rookie economist, she felt I would understand the dynamics and she opened up to me.

I quipped in, “So you work for only four hours a day?”“Yes,” she responded. “But at that time my work time dropped to two hours — one in the morning and one in the evening. I finish selling all the bread I can carry in only one hour, and by the time I get back to Baba Rashida to restock he would have finished selling. Some of my very loyal customers started complaining that they no longer get bread to buy because I finish selling before I can get to their houses.

It was funny because some people who used to claim that bread was only for the rich people started patronizing me. Even Brother Sola who had been looking for a job for over two years got a job with Baba Rahida, the bakery owner, and his family started eating bread. So I thought to myself that if my bread can be finishing quickly like this, could I increase my profits by increasing prices? Then a loaf used to go for N100.

I increased it to N120 and I lost some customers, but I was still able to finish selling my stock. The good thing was that my loyal customers were now able to get bread. Although I worked for longer hours now, but my profit was more. Ah, those days!”

I was impressed. “Does that mean that you continued to get bread from Baba Rashida at N80, but you now increased your price from N100 to N120 and you still finished selling your bread?”
“Yes”, she replied with a smile.

I sent an email to my Professor. He got back to me with a very long response. In summary, he said, Jumoke just explained the concept of demand-pull inflation. In this type of inflation, people have a lot of money to spend so there is an increase of demand for goods and services. This increase in demand for goods and services in turn leads to more employment as producers try to meet up with rising demand. But over the short term, it is difficult to expand the bakery once it starts operating at full capacity, so there is a fixed production of bread.

Because of increased demand, which kept leading to stock-outs, Olajumoke increased the price of her bread. But since people had money to spend, she was able to finish selling her bread day in and day out. Business was good. Profit margins were high. People worked overtime and everything was good.

A few months ago, I got talking with Olajumoke again. “Long time, no see! Where have you been? You didn’t even bother to call me.”

“It’s not like that oh, Manny”, she replied. “I have been very busy these days.”

“Busy doing what?” I asked. “ I thought you worked for only four hours a day?”

“See, a lot of things have changed,” Olajumoke said. “The bread business is no longer the way it was when we first met.”

My interest was piqued at this point, but thankfully my friend knew how curious I get at times so she did not let me come out with my question.

“See, Manny,” she continued. “You know Baba Rashida used to buy imported flour for his bread. They said there is this dollar scarcity and the flour that he used to buy for N10,000 is now N18,000. To even make matters worse, cost of diesel has increased from N135 to N200, and he also has to pay more for electricity.

Even Tajudeen that used to help him bring his goods from Apapa said they have increased price everywhere and transportation has gone up. NEPA people said they have orders from above to increase price of electricity. Everybody is just tired.

Baba Rashida was servicing a loan he took from the Bank, and they told him he would have to start paying more interest because the Ogas in the bank said the Ogas in the Central Bank have increased interest rates. Baba Rashida said the only thing that is stable now is his house rent. He said he couldn’t sell bread to us at N80 per loaf again. So he increased his price to N120. And people are not even eating bread like before again; people are just soaking garri nowadays. Brother Sola even lost his job too. So you can imagine that me that used to sell bread at N120, what will I gain now?

You remember I used to make a gain of N40 per loaf when I increased price. Now there is no gain again. But I have to take care of myself too so I increased price to N150 but people were not buying like before. I had to bring the price down to N140 and then N130. Even at that N130, many times I don’t sell everything. So you see, I have to spend more time hawking bread. And I have to spend more money to buy the same amount of bread and I make much less profits than before.”

I told my Professor about this and I got another epistle from him. He said this is called cost-push inflation. This is different from demand-pull inflation in which lots of money is going after few goods and services. This time around, the cost of input into goods and services has gone up. So for producers to break even, they have to raise their prices.

This situation is worsened when this is accompanied by a recession in which people are losing their jobs. They have less to spend so they reduce demand. Because of this, profit margins are squeezed. It is a bad combination when a rise in cost of production is accompanied by lower amount of money available to purchase these goods.

What is the solution to this? This is beyond monetary policy tweaks such as interest rate and foreign exchange manipulations. While it is a good place to start, this needs to be accompanied by structural or fiscal policies to help ease the strain in the rise of cost of inputs. For example Baba Rashida has been complaining about the rise in prices of flour. This price rise may not be due to only foreign exchange. If there are policies such as high and multiple tariffs and taxes, these could be tweaked to bring down prices of imported flour.

The Government doesn’t have to build roads or increase electricity transmission capacity overnight — these are long-term projects that are not expected to yield fruits immediately. Little things like these pesky policies can be tweaked to ease economic activities and to jumpstart the economy. These policies have a positive impact within a very short period of time such as a few weeks.

“Thank you for this information Jumoke,” I said. “It was really helpful for my knowledge base.”

“Not a problem, Manny. I am no longer selling bread though.”

“Oh, really? So what are you doing now?”

“You don’t know? I met one photographer and one singer some time ago and I am now a m…”

Disclaimer: This is a work of fiction. Names, characters, businesses, places, events and incidents are either the products of the author’s imagination or used in a fictitious manner. Any resemblance to actual persons, living or dead, or actual events is purely coincidental.