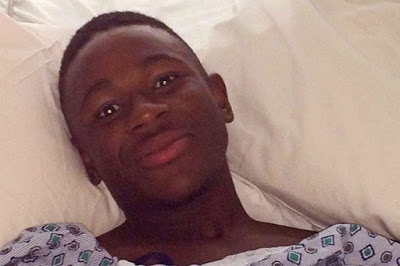 Reuben Nsemoh, a teenager from Atlanta, has made international headlines after waking up from a coma speaking fluent Spanish – a language he only had a basic understanding of before.

As well as this, the 16-year-old said he struggled to speak English after suffering concussion during a football game. Every time he tried, he said, it felt like he was going to have a seizure.

Fortunately he is now naturally regaining his use of English without having to relearn it, as his brain repairs itself.

While incredibly rare, cases like Reuben’s – where someone wakes up speaking a language they didn’t think they knew – are not unheard of.

There was, for example, this man who spoke Welsh after a stroke despite not having been to Wales for 70 years.

Or take this Australian man who came to after a car crash speaking Mandarin – a language he had learned at school, but wasn’t fluent in.

So, how is this even possible?

No one is 100% certain yet, but according to Science Alert scientists are pretty sure it’s similar to another rare condition – Foreign Accent Syndrome.

With FAS, where people wake up speaking in a different accent, the brain is simply readjusting and rewiring itself after suffering from a trauma.

According to Lyndsey Nickels from Macquarie University, damage has been caused to the part of the brain that controls the muscles used to produce speech.

‘Speaking requires very precise control of the muscles of lips, tongue, and jaw (the speech articulators) and the larynx (voicebox),’ she wrote for the Conversation in 2013.

‘If the placement of the articulators, speed or coordination of movements are slightly out of sync, then speech sounds will be altered.’

So they’re not really speaking in a different accent?

Sort of, but not quite.

Basically this means that although people sound like they’re speaking in a new accent, they’re actually just losing control over the way they’d normally pronounce sounds.

Sometimes, the result sounds a bit like an accent that already exists.

True, but in the same way people aren’t really speaking in a new accent, they’re probably not speaking the language fluently.

When people wake up speaking a different language ‘fluently’, it may actually be that they’re speaking so confidently that people don’t notice they’re making a lot of mistakes.

Usually what they’re actually speaking is a combination of what they’ve learned and what they’ve unconsciously picked up and stored away.

Okay, but if they’re not fluent how come they sound so confident?

Well this could be down to something called aphasia – an impairment of language usually caused by strokes.

Often it affects all of the languages someone knows, but scientists now reckon it could sometimes only affect a person’s native language.

This means they fall back on a secondary language they may have studied for a bit and forgotten about.

Writing on the case of a Croatian teenager who woke up speaking German, Yale University neuroscientist Steven Novella said the aphasia could ‘theoretically have the effect of making her German seem more fluent, because she does not have to expend mental energy inhibiting her Croatian’.

One Comment on “Boy wakes up from coma speaking fluent spanish”