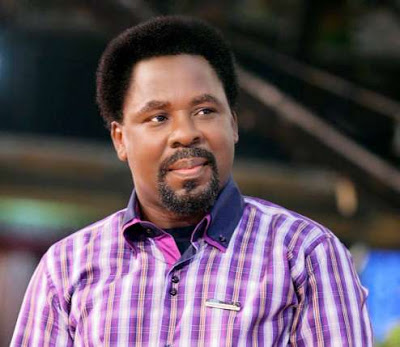 You seem to be the Godfather of Spiritual Fathers in Africa. You are one of the people who has inspired the whole African continent to follow the Spiritual Papa movement. Personally I believe you are one of the men in this world who are hurting the black race. You are accountable for brainwashing millions of vulnerable black people and keeping them in slavery, mental slavery. The white man is no longer our enemy, men like you TB Joshua are the true enemies of the black race. You are accountable for keeping black people in chains when God released us from Egypt centuries ago. You train men like Walter Magaya to cause maximum damage to black people, and you do all this in the name of God.

You call yourself a Prophet who hears directly from above. But today I have the honor to call you a liar and a false prophet. I hold you accountable using the same bible you claim to follow.

“If the prophet speaks in the Lord’s name but his prediction does not happen or come true, you will know that the Lord did not give that message. That prophet has spoken without my authority and need not be feared. Deuteronomy 18:22, NLT

You issued a prophecy to the world via Facebook on 6 November 2016 at 4:16 pm where you claimed that you had been shown a woman winning the next American Presidential Election. Holding you accountable using the bible, your prophecy has failed to come to pass just 3 days after. Today Donald Trump became the American President and I think it’s fair for us all to agree that he is definitely not a woman. According to the bible, you did not hear from God sir and you spoke without authority from above. People should no longer fear you. In other words, you are not a prophet and no one should hold you in that esteem.

Today soon after Donald Trump shocked the world by becoming the 45th US President, you quickly deleted your prophecy from Facebook. But we thank God for technology, smart black people had already screenshot your lies, and they will never be deleted from social media forever. Here is the evidence of your lies below. 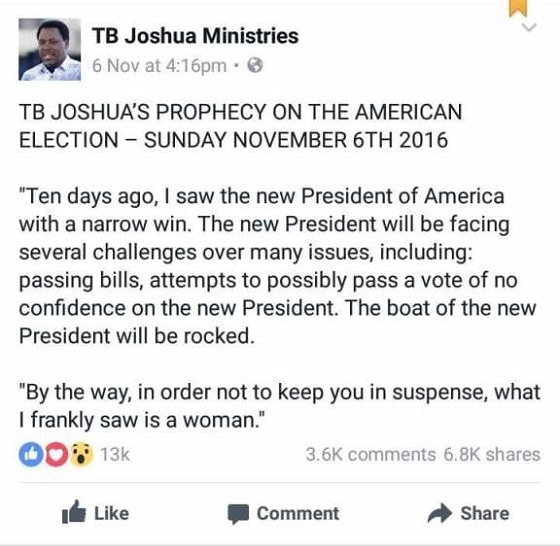 TB Joshua, please do the honorable thing and apologize to God first. Then to us the black race. I think it’s also fair to apologize to the American people who truly believed your false prophecy and did not go to vote thinking God had already done it. It’s actually because of people like you why Trump has even won in the first place. You contributed to the media hype and campaign that caused people not to vote for your beloved Hillary Clinton thinking it was a done deal. The true God has really spoken, he favoured Donald Trump over Clinton.

May I end this open letter by addressing all the black people who are under the spell of prophets and spiritual fathers. Just a few days ago I wrote about how men like you TB Joshua are a curse to the black people, especially black women. To my dear black folk across the whole world, may the winning of Donald Trump be a wake-up call to the entire black race. Do not be afraid of anything or anyone. Donald Trump is not your enemy. Slavery was abolished in the 18th century. We are now in the 21st century. Colonialism is over. It’s time to just move on from the chains of slavery. Stop mourning. Hillary Clinton was never going to do anything for you anyway. Even Barack Obama could not save you. The problem is not the world leaders, or the white men. The problem is us. 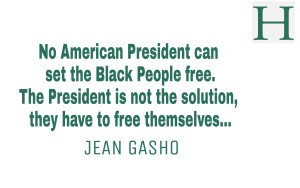 As for you TB Joshua, instead of just deleting your fake prophecy from Facebook, please do issue a statement and explain to us why your god lied to you. I for one am waiting for that statement from you, and I know millions of black people who believed in you are waiting too. You are trending all over social media, even BBC and CNN are mentioning your failed prophecy, so please redeem yourself and speak out.

PS: I was not used by the devil when writing this letter and I definitely won’t be cursed or punished by God for it. And for the record I’m not mad, I’m just a woman.