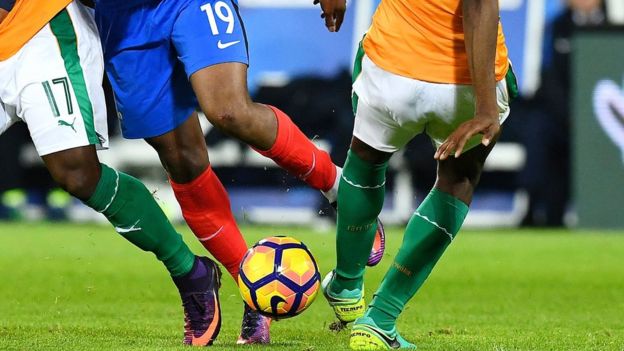 A major survey into global football shows that life for the vast majority of African footballers is a far cry from the glitz and glamour of those lucky enough to play in the world’s top leagues, writes Piers Edwards.

The International Federation of Professional Footballers (Fifpro), a trade union of sorts, has conducted a global survey of nearly 14,000 professional footballers in 54 countries – the largest ever undertaken.

While many young Africans dream of becoming the next Didier Drogba or Samuel Eto’o, the data collected by Fifpro paints a dark picture of the true reality of life as a footballer on the continent.

One of the most shocking findings of the survey is that physical abuse of footballers in Africa is the worst in the world.

Players in Ghana are 10 times more likely than the global average to be physically attacked by club seniors.

They face multiple forms of abuse which include:

Players also reported very high levels of discrimination – which Fifpro categorised as either racial, sexual or religious – by fans, other players, coaching staff and third parties.

Strangely, this was only equalled by Scotland – whose discrimination is largely driven by the religious divide between Catholic Celtic and Protestant Rangers.

In South Africa and DR Congo, violent attacks on players by other players are three times higher than the global average.

DR Congo has the highest rate of players being physically attacked by fans on a match day, with Kenya coming a close second.

There is also evidence of what Fifpro calls “a form of solitary confinement”, amounting to mental abuse.

The survey found that the players most likely to be ordered to train alone are in Africa.

This applied to 7.6% of players – more than double the tally of footballers in Europe or the Americas.

More players in Africa than anywhere else said this was to pressure them into signing a contract.

The best-paid African nation when it came to earning over $1,000 a month was Morocco, although players there were the most insecure on the continent about their future.

Egypt’s league is widely seen as the strongest in Africa – with two of its clubs having been crowned African champions more than anyone else.

Yet the Egyptian league is the fifth worst-paid of the 13 surveyed in Africa.

Over 90% of players said they were paid under $1,000 a month, which may be equivalent to Europe’s worst-paid surveyed country (Ukraine) but which reflects poorly against the tally of just 5% in Morocco.

Have the figures been compromised by the Egyptian league’s recent troubles?

Stadium disasters in 2012 and 2015 have resulted in fans being largely barred from matches, all but annihilating gate receipts (and hugely damaging the domestic game).

The survey’s highest rate of payment delays was in Africa – with over half the continent’s respondents saying they had suffered.

In Gabon, which will host the Africa Nations Cup in January, a whopping 96% of players reported payment delays.

Africa has the greatest number of footballers without a written contract, according to the survey, with 40% of players saying they lack a copy of their contract.

Africa’s superior treatment of foreign nationals in daily life is reflected in its football, with expatriates disproportionately more likely to have written contracts than local players.

In a move that Fifpro says avoids “taxes, protective labour legislation… and other provisions safeguarding the interests of players,” many Africa-based players were paid through secondary image-rights contracts, which normally reward a player based on his commercial value.

Surprisingly, more Africans receive remuneration this way – 11% – than those in the promised land of Europe.

In Gabon and Zimbabwe, this applies to 32% and 30% respectively of players.

A glimmer of good news

But all is not bleak in the survey’s findings.

When it comes to paid annual leave, Ivory Coast and Namibia are shining examples, in that both give players more than 30 days per year.

In contrast, the powerhouse of Egypt doesn’t look so good – with 93% of respondents saying they have less than 10 days of paid annual leave a year.

A stand-out 99.5% of players in Tunisia, meanwhile, are given a full day off every week.

In the rest of the continent, however, almost a third of Africa-based players say they do not have a full day off each week.

In no other continent do so many players fear for their future.

When players were asked if they felt insecure about their job, 11 of the top 13 countries to express such concerns in the entire survey were African.

Despite their relative wealth, Morocco and Gabon feature highly.

Perhaps surprisingly, players in Zimbabwe – a country where the local FA is so cash-strapped its inability to pay a former coach resulted in its suspension from the 2018 World Cup – felt the most secure of the 13 African countries.

Previous research by Fifpro suggests that non-payment of footballers’ salaries may be a significant factor in increasing the risk of match-fixing approaches.

Coupled with low wages, is it any surprise that Africa has the highest rate of approaches – standing at 8.3% of those surveyed?

However, this needs context. This means that nearly 92% have not been approached, a figure that is almost equivalent to Europe (94.1%).

Furthermore, while 10.1% of the Africans surveyed said they were aware of match-fixing in their league, that is only slightly higher than those in Europe – 9.8%.

The dismal record of DR Congo

Seemingly the last place you would want to be a professional footballer in Africa is DR Congo.

Some 89% of players in DR Congo have no written employment contract – a figure double that of any other nation in the 54-country survey.

The number of players who have experienced violent attacks by other players is three times the global average in DR Congo.

In addition, one in four Congo-based players say they have been attacked on a match day by fans – the survey’s highest rate.

Even violence on a non-match day in the country is three times the global average.

Another sign of poor working conditions is that over half the Congolese players say they do not have a day off each week.

Does any of the above explain why a staggering 56% of players say they are aware of match-fixing in the Congolese league?