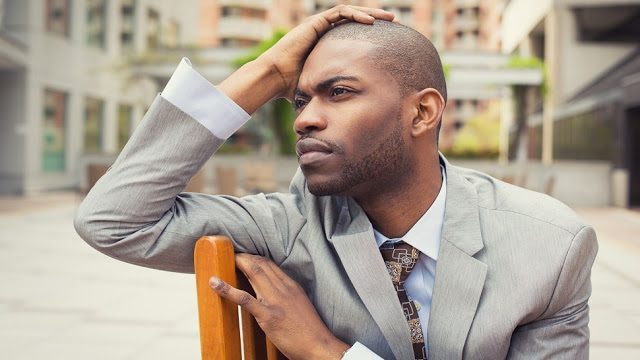 Mental illness is a taboo subject that attracts stigma in much of Africa.

A study conducted in Uganda revealed that the term ‘depression’ is not culturally acceptable among the population, while another study conducted in Nigeria found that people responded with fear, avoidance and anger to those who were observed to have a mental illness.

Suicide victims are often stigmatized as weak, unstable or sinful.

This stigma linked to mental illness can be attributed to lack of education, cultural practices, religious reasoning and general prejudice.

Still from the study, when surveyed on their thoughts on the causes of mental illness, over a third of the Nigerian respondents (34.3 per cent) cited drug misuse as the main cause.

Divine wrath and the will of God were seen as the second most prevalent reason (18.8 per cent), followed by witchcraft/spiritual possession (11.7 per cent).

The World Health Organization (WHO) defines mental health as ‘a state of well-being in which the individual realizes his or her own abilities, can cope with the normal stresses of life, can work productively and fruitfully, and is able to make a contribution to his or her community’.

Mental illness refers to all of the diagnosable mental disorders, which are generally characterized by abnormalities in thinking, feelings or behaviors.

Mental illness is closely related to vulnerability, both in its causes and in its effects.


Globally, 14 per cent of the global burden of disease is attributed to mental illness – with 75 per cent of those affected being found in low-income countries – which includes a broad spectrum of diagnoses, from common mental illnesses such as anxiety and substance abuse, to severe illnesses like psychosis.

The African region does not recognize the importance of mental health, not as much as it does conditions like malaria, tuberculosis, sickle cell disease and HIV/AIDS.

Research has also suggested that there is a close relationship between these conditions and mental illness.

Strong social stigma has meant that in much of Africa mental illness is still a hidden issue equated to a silent epidemic.

Many households with mentally ill persons hide them for fear of discrimination and ostracism from their communities.

Girls from homes known to have mental illness are disadvantaged due to the fact that a history of mental illness would severely reduce their marriage prospects.

The effect of the silence on mental illness is further compounded by inadequate focus at the policy level. Lack of adequate national level financial and technical investments in addressing mental health impacts the understanding of the issue in the African context and on the available avenues for care and support. Most developing countries dedicate less than 2 per cent of government health budgets to mental health care.

The social environment in many African countries does not nurture good mental health, mainly due to the myriad conflicts and post-conflict situations. War and other major disasters also have a large impact on the mental health and psychosocial well-being of people.

Internal conflicts, which are either resource-based, religiously or politically instigated, are commonplace and leave long-term mental health effects on those affected. The WHO estimates that 50 percent of refugees living in camps outside their homes have mental health problems ranging from post-traumatic stress disorder to chronic mental illness.

Poverty remains one of the major causative agents of mental illness.

It is notable that poverty and mental health are closely related, implying that people living in poverty are more vulnerable to mental illness, while those with pre-existing mental illness are more likely to become trapped in poverty due to decreased capacity to function optimally.

Poverty, exacerbated by difficult socio-economic conditions, can lead to isolation and loneliness and, in turn, to depression, especially among vulnerable persons and groups.

Family remains an important resource for the support of patients with mental health problems. Although most families are willing to care for their sick relatives, severe mental disorders may deplete the resources of even the most willing and able families. However, as urbanization becomes more widespread and the extended family system breaks down, the availability of critical care for the mentally ill is becoming scarce.

The Middle East and North Africa suffer the world’s highest depression rates, according to a recent study by researchers at Australia’s University of Queensland — and it’s costing many people in the region years off their lives.

The study, published in 2013 in the journal PLOS Medicine, used data on the prevalence, incidence and duration of depression to determine the social and public health burden of the disorder around the world.

Globally, they found that depression is the second-leading cause of disability, with slightly more than 4 percent of the world’s population diagnosed with it.

The map below shows how much of the population in each country has received a diagnosis of clinical depression. 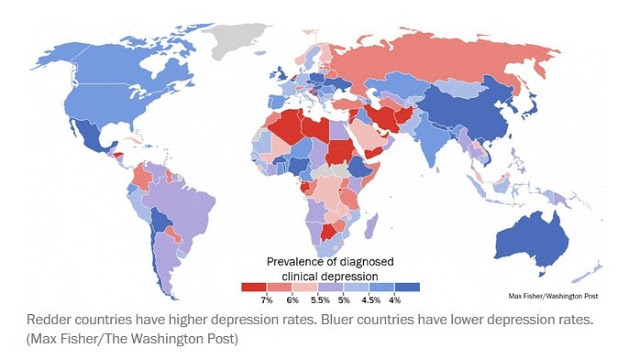 More than 5 percent of the population suffers from depression in the Middle East, North Africa, sub-Saharan Africa, Eastern Europe and the Caribbean.

The most depressed country in the world is Afghanistan, where more than one in five people suffer from the disorder.

The least depressed country is Japan, with a diagnosed rate of less than 2.5 percent, according to the study of depression burden in regions around the world, as measured by years of living with disability.

Stigmatization of mental illness could be addressed through increased awareness, greater prioritization of treatment, and enhanced support and education.

Training primary health care workers to recognize common forms of mental ill health, especially at the first point of contact (health post or dispensary) and the provision of the necessary interventions should be a key investment for countries in Africa.

In Africa, presently, a significant proportion of care provided to the mentally ill come from traditional healers (including soothsayers and witch-doctors) and religious leaders (priests/pastors).

Natives often claim they are the only group that really understand the illness and at all times know what to do.

The British Journal of Psychiatry