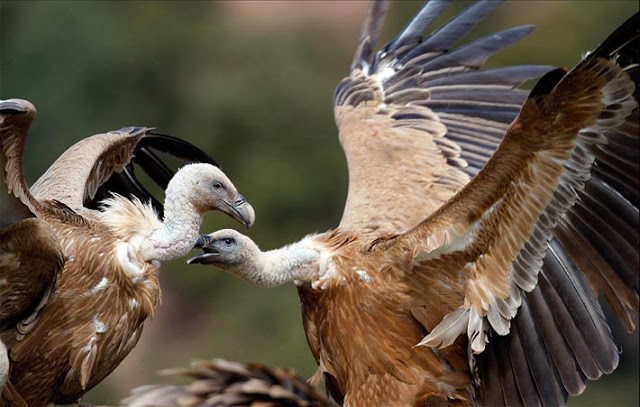 A Dutch zoo says two male vultures in a long-standing relationship have become parents after successfully hatching an egg.

Staff gave the gay griffon vultures an abandoned egg, which they cared for in their nest for two months.

Zoo keeper Job van Tol said the two fathers are “a very tight couple” and are doing the job perfectly.

“We have had them for some years. They always build a nest together, bond and mate together,” he told the BBC.

“But, as two males, the one thing they could not do was lay an egg.”

So when staff discovered a lone egg that none of the other vultures would adopt, they first cared for it in an incubator, and then decided to place in the male couple’s nest.

“It was a bit of risk as we had no guarantees of success, but we thought, finally, this is their chance,” said Mr Van Tol.

Artis Amsterdam Royal Zoo said the new parents are very protective of their fast-growing chick, which is now 20 days old, and they have been breaking up its food to make it manageable to eat.

“As in some penguin species, vultures do everything the same, they alternate all the jobs. Females lay the eggs, but they breed together, they forage for food together. Males are programmed to have that duty of care,” said Mr Van Tol.

This is the zoo’s first successful hatching in five years.

Another chick was also hatched during the same period, by two heterosexual parents who were rescued from a road accident in Spain.

“We are lucky to have two very special stories this year,” said Mr Van Tol.

The zoo is hoping to release the two new birds into the wild when they are older and independent.

In April 2016, there was news of another pair of gay vultures caring for an abandoned egg at Nordhorn Zoo in northern Germany.

“They sat on it in the nest, but it was not fertile,” Dr Heike Weber, veterinarian and zoo curator, told the BBC.

“We did not think it was, but we did not want to take it away from them to examine it.”

When the zoo keepers finally intervened, the birds became aggressive. “They were attached to it, absolutely,” said Dr Weber.

One Comment on “Gay vultures become parents in Netherlands’ zoo”