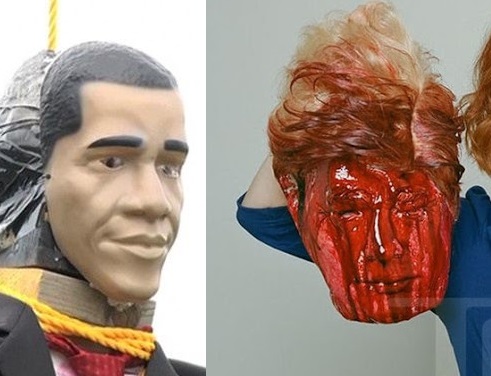 Kathy Griffin posed with an image of Trump’s severed, bloodied head, and the public was not amused.

She has since apologized for the stunt, but to no avail: she’s still been fired from CNN. Such apologies never quite have the ring of truth. It’s more like “now that I realize that people didn’t like it, I wish I hadn’t done it.”

Schrödinger’s penitent is both sorry and not sorry, until she sees how her public opinion responds.

I thought her display disturbing, and her apology insincere.

Still, as a Leftist conservative, and ardent anti-Trumper, I have enough common ground with liberals to feel, with them, some degree of hypocrisy in the right-wing demand that we universally denounce her actions.

Yes, I denounce her actions, but I also don’t think they are as important as the acts of real violence that are perpetrated by our regime, and others, on an hourly basis.

I am more offended by refugee children left to drown than I am by a second-rate actor’s publicity shenanigans – however tasteless.

I am more offended at the idea that unborn humans are being threatened by abortion because women are shamed for their pregnancies or denied health care.

And where, might I ask, were all these outraged souls on the many occasions when right-wingers burned Obama in effigy? Where are the demands for an apology?

Where is the outrage when Ted Nugent promoted actual violence against Obama? And when Trump invited Nugent to the White House?

I never voted for Obama, by the way, though I always respected his intelligence and decorum in spite of sharp political differences – but, even were I a dyed-in-the wool Republican, I would consider such displays to go beyond mere bad taste.

The spectacle of gangs of white men gathered around the burning effigy of a black man looks disturbingly like an invitation to re-enact our terrorist past with regard to Black Americans. Beheading is not funny, especially with what is going on right now with ISIS. And lynching and burning are not funny, either, especially with our own recent history.

Republicans are appalled that Trump’s eleven-year-old son apparently caught a glimpse of the image. So are Democrats. So am I. Whatever anyone may think about Trump, Barron is a child, and deserves to enjoy the innocence and safety of childhood.

I am also appalled that Sasha and Malia were repeatedly subjected to images of their father being gruesomely tortured (unless the Obamas kept their daughters off of social media at that young an age, which would be wise).

I am appalled at the horrible racist commentary to which those young women were subjected on social media.

Many liberals and leftists have stood up to denounce Griffin’s stunt, along with political independents, and I am glad to see it.

Unfortunately, it’s hard to be impressed with the moral outrage of right-wingers who are declaiming “thus all democrats!” – when they were collectively, conspicuously silent about the treatment of the Obama family.

But, of course, when white Republicans do these things it’s playful. It’s free speech. It’s just a joke. At worst, it’s drunken teenagers. But imagine the outrage if, say, Black Lives Matter were to burn Trump in effigy?

Griffin apologized because she realized people were not pleased. If those who burned Obama in effigy have not apologized, perhaps it is because they had no reason to believe those on their political team were not pleased by their behavior?

We need to have higher moral standards for our public behavior, and we need to be consistent in these standards, no matter what our political sympathies of affiliations.

Rebecca Bratten Weiss is a part-time teacher and part-time farmer.