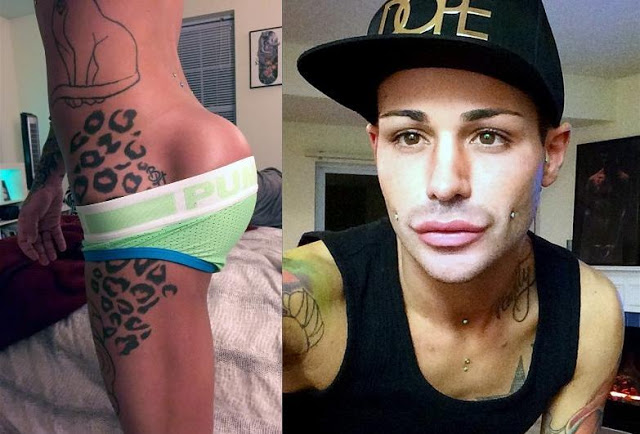 A 26-year-old plastic-surgery-obsessed man has spent more than $75,000 in a bid to sculpt his perfect body.

Joey Prixx, from Boston, USA, has undergone a record number of 100 cosmetic procedures.

In April 2016, doctors inserted the biggest silicone implants possible into his bum — so as to triple the size of his ass.

It was reported that after the surgery, Joey couldn’t sit on his buttocks for a complete 6 weeks!

With his new gigantic bum and tiny frame, Joey has been compared to the Kardashians and claims he couldn’t be happier with the attention his latest asset brings.

“I absolutely love my new bum, it’s just perfect. I had 350cc silicone implants inserted through either sides of my bum crack, they’re the largest I could have without them being specially made due to my body size.

“I know people think they must be a little out of proportion but that’s what I wanted, everyone’s been so complimentary, they’re definitely a talking point.

“I often have people asking to touch them too, they feel like two huge water balloons it feels really cool sitting down now and I absolutely love it. Life is so much more fun with butt implants.

“What can I say? My motto is plastic is fantastic, I’m now saving up for another nose job to improve my bridge and I’d like to double the size of my bum implants.”

Joey works six days a week to fund his love for surgery and chooses to use all his holiday allowance for recovery — claiming his quest for perfection is far more important than going away.

“I’m lucky enough to be able to work hard doing something I absolutely love and be able to pay for my fancy lifestyle, like a nice car and beautiful home and all my surgical procedures.

“As a creative and aesthetic body piercing artist, I like to make people sparkle and feel better about themselves.”

“Cosmetic surgery has been a huge part of my life for five years now. I started transforming my body when I was 21, I’ve always been confident but I wanted to tweak myself to what I see as perfect.

“I haven’t looked back since and it was the best thing I’ve ever done.

“If I had to pick though the tattoo removal was definitely the most painful. But the bum implants have definitely been the most daring yet, I didn’t like how flat my butt was.

“Women get boob jobs all of the time, so what’s wrong with a guy getting a bigger bum?”

Over the past five years Joey has forked out more than $75,000 on two nose jobs, silicone butt implants, sweat gland removal, as well as Botox on his forehead, eyebrows, eyes, nose and chin and fillers for his lips and cheekbones.

Every one to three months Joey has lip fillers along with Botox on his forehead, eyebrows, eyes, nose and chin which costs $1850 and cheek bone fillers once a year.

But despite having 100 painful cosmetic procedures Joey claims laser tattoo removal hurt the most.

Surgery hasn’t always been plain sailing for Joey though.

Joey said: “After my first nose job I was really impressed, but just months later the implant that the surgeon had inserted slipped out of place.

“I then needed revision surgery to correct this which cost another $1000 and although it’s better I still want the bridge of my nose thinner.

“I expected my bum implants to have a few hiccups too but I was lucky really I only had a small fluid build up afterwards but they’ve been fine ever since.

“I just couldn’t sit down at all for six weeks and had to take a lot of pain killers.”

Despite people comparing his new booty to the Kardashians, Joey insists he doesn’t want to look like anyone else and is creating his own unique look.

Joey said: “My friends have been supportive, people don’t always understand why I have the procedures but I think now they just get that it’s just a part of who I am.

“A lot of people told me to not get my butt implants but I’m so glad I did.

“For anyone considering having them, make sure you’re 100 per cent sure, I was in a lot of pain for a while but for me it was definitely worth it.

“I’m going to continue building towards what I see as perfect, I will never be perfect but I I’d like to get myself as close to that goal as possible.

“Being plastic is my trademark, everything I do is unique and I will continue to make myself different.”