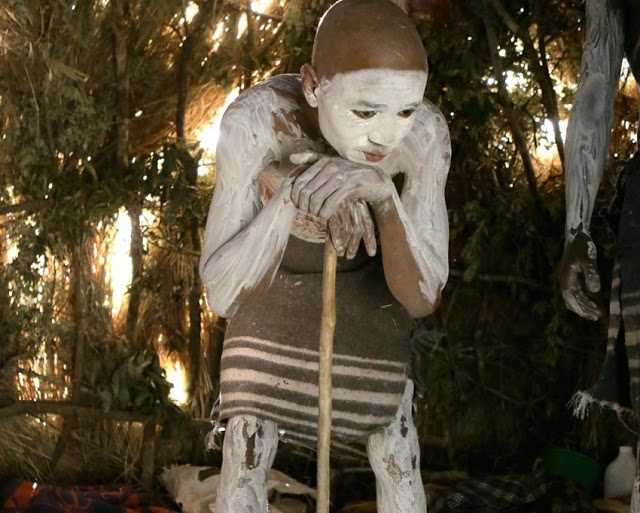 The male initiation ceremony of the Xhosa people of South Africa, called Ulwaluko, is an age-old tradition.


It’s a mystical, secretive ritual that occurs far away from the eyes of the public, and virtually the only information non-participants and non-family members ever have about it is the disturbing death toll from what the newspapers call botched circumcisions.


As a result, there is now an intense pressure from many quarters to ban the custom altogether.


The ritual is traditionally intended as a teaching institution, to prepare young males for the responsibilities of manhood.


Initiates are called abakhwetha in isiXhosa language: aba means a group, and kwetha means to learn.


A single male in the group is known as an umkhwetha.


A male who has not undergone initiation is referred to as inkwenkwe ( mere boy), regardless of his age, and is not allowed to take part in male activities such as tribal meetings.


The initiates will travel far into the ‘mountain’ where they’d earn the right to call themselves men.


During the ritual process, the traditional surgeon (called ingcibi) surgically removes the foreskin of the penis.


Poor aseptic practices lead to transmission of diseases such as HIV and hepatitis B. One single traditional spear is commonly used to circumcise all initiates without intermediate sterilization.

Washing the foreskin (and applying an antiseptic) prior to the procedure reduces the wound infection risk, however this is rarely practiced.


Usually the traditional surgeon will either pull the foreskin or stretch it over his thumb after which he severs it.

Often the foreskin is ‘chopped’ rather then excised, resulting in a higher number of surgical complications. This is further aggravated by alcohol and substance abuse by the traditional surgeon during the procedure.


Surgical complications include excessive bleeding, ragged and/or asymmetrical circumcision wounds, excessive removal of skin (leaving large wounds that are prone to infection), and failure to remove the foreskin entirely.


According to the writers and producers of the controversial film ‘Inxeba‘, after the cut is made the ingcibi says “You are a man!”


How long the period of seclusion that follows thereafter differs. It normally used to be about 6 months, but now in modern times and/or in urban areas, it usually lasts a month.


The first few days after the cut the abakwetha are understandably in great pain and discomfort.


They eat only half-boiled maize and no water for seven days!

This highly undesirable practice leads to dehydration, which in turn can lead to acute renal failure and shock. Other complications, such as wound and chest infections, are much more likely to occur in dehydrated initiates.


The degree of fluid restriction differs from school to school; some even mix the drinking water with soil.


Confined in huts, the initiates have just a single blanket to cover their bodies and little straw between them and the cold earth.


It’s usually freezing cold at night but no complaints are entertained.


Their overseer, called the ikhankatha (traditional attendant) shows them how to dress their wounds with ischwe leaves, visiting them up to four times a day during this critical time.


Poor hygienic practices are abundant. Most attendants do not use gloves, nor do they wash their hands before each dressing change.

Bandages are reused on different initiates. Leaves are rubbed against the sole of the foot before application onto the wound. All these practices introduce bacteria into the wound and spread them from one initiate to the other.

Additionally, tissue that is starved of oxygen is vulnerable to infection.


After about five days, the attendant covers the initiates’ faces, arms and legs with white clay.


It is supposed to keep them warm and protect their skin from the sun.


Also, initiates are believed to be endangered by witches during the so-called twilight phase between boyhood and manhood. The white clay offers protection, they say, and they are made to sing throughout night to keep witches away, which leads to sleep deprivation.

Those that die during the ritual are believed to be killed by evil witches!


The initiates must keep up the application of white clay or be punished. They are also given white blankets with red stripes, and they sit silently in the sun as the attendant delivers the next set of instructions.


Finally, when the initiates are allowed to eat normally, the second phase of the ritual begins and will last a further two to three weeks.


The termination of the period of seclusion commences when the boys are urged to race down to the river to wash themselves, yet again depending on the location of the school.


The hut and the initiates’ possessions are burnt and each initiate receives a new blanket and is now called “ikrwala” which means new man.


Details of the ritual are not supposed to be disclosed to females or non-initiated males; according to the principle of ‘what happens on the mountain, stays on the mountain’.


Cultural prejudice may be so great that uncircumcised or ‘improperly’ circumcised men (those not able to bear the pain and ran away) are attacked and beaten for their lack of conformity.


In March 2014, a young man was assaulted after he had spoken out during a community meeting about the complications he sustained through the ritual.


A Dutch medical doctor, who treated many patients with complications of the ritual, published the website ulwaluko.co.za in January 2014.


The website gives detailed information about the problems accompanying the ritual and offers possible solutions.


It also features a gallery of photographs of injured penises, which sparked outrage among traditional leaders in the Eastern Cape.


They demanded that the South African Film and Publication Board shut down the website, even though they are not the responsible authority.


The Board however ruled that the website was “scientific with great educative value”, addressing a “societal problem needing urgent intervention”


When the abakwetha was asked why they had to go through all this, they replied: It’s hard to be a man. You can’t buy it, or be given it, you have to be it. You have to endure pain, hunger and hardship.


“When times get tough in your life, you know you got through your initiation, so you can get through whatever challenge you are faced with!”


A similar tradition is observed in southeastern Nigeria and it is called “Emume Mmanwu” or “Masquerade Festival” where initiates are flogged with palm frond ends at night and made to endure extreme pain before they are called men.

Those not able to complete the ritual are called women and not allowed to participate in community events.
Share this post with your friends: