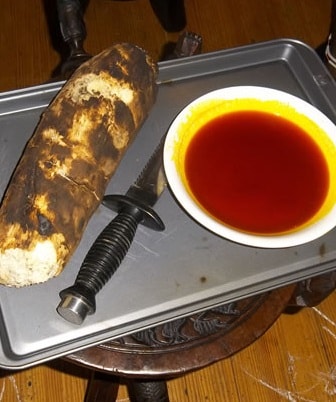 …the Iwa ji festival marks the arrival of the new yam.

Papa used to follow the Igwe and other elderly men of Umunka to Ogwugwu shrine the evening before the festival day where the Ezemuo performs the ihe Ihejioku ritual.

At the ritual, sacrifices are offered to Ihejioku, the god of harvest in gratitude for allowing a successful planting season.

Each time I pass by the shrine and see the blood stains and plucked feathers all over the foot of the huge ogirisi tree, I’d wonder why Ihejioku would allow Ezemuo eat the meat and the yams, and offer Him only blood and feathers.

He must have been a very tolerant god.

But Mama and Rev. Mathew have succeeded in persuading Papa into abstaining from the ritual ceremony.

There were many others like Papa too who no longer partake in the ihe ihejioku ritual, but they all still streamed to the festival ground on the festival day, to enjoy the occasion like everyone else.

After the ihe Ihejioku, old yams must not be eaten again. Papa does not throw away our old tubers again. He sells them at his shop too.

Papa had said the traditions have weakened since the arrival of the church and people now continue eating old yams even after the Iwa ji festival. Papa also said some aspects of the festival has been discarded, that there was a time when those whose farms did not produce good yields after the harvest were required to undertake a spiritual cleansing before they could partake in the festival, a time when Eze ji was a highly respected title in all the five villages in Umunka.

People now stuff their barns with purchased yams, Papa said, rendering the Eze ji title— a gigantic title given to the men whose farms produced the greatest yield of yam in the season— almost meaningless.

Mama once said Papa’s father, Okeke-odogwu, was an Eze ji before his death.

As broad as the ground is, it is always crammed full of people on that day, from the oldest to the very young, even suckling mothers came with their babies too!

Their fat wives wear puffed-sleeve blouses along with double wrappers—abada, george, hollandis—it’s always a good opportunity for the women to display their, or rather their husband’s status and they made sure they utilized every bit of it.

They deck their necks with strings upon strings of beads, some wear too many that their necks always remain bent when they are sitting.

They also wear matching scarves, wound tightly around the head and allowed to flare outwards at a side, sometimes as long and wide as a plantain leaf.

Strong cover shoes hoist them to a greater height.

They are people of the higher-class and they always sit under the canopy while the lower classes cluster around the open ground.

The lower classes do not dress as flamboyantly as the rich people, most of their numerous children come shirtless with their bare stomachs looking like they each swallowed a whole melon.

Papa and Mama also sit at the canopy, though at the extreme back because each row of seat belongs to people of a particular status.

Igwe and his large-bodied Lolo sit at the high table with the movers and shakers from different fields of work—a famous politician, a well-travelled lawyer and successful businessmen were all in attendance last year.

Big tubers of yam roasted whole are set in a wide tray and laid at the center of the table, alongside a big, black oku containing runny palm oil.

Often, the oil is garnished with chopped pepper and ukpaka sticks.

Another tray containing a mountain of anyara is placed at the other end of the table, right beside a small bowl filled with big, king-size cola nuts.

Ichie Onyemalume prayed the ofo last year and opened the event. He wrestled with his chair for a while before he eventually stood, supporting his bent frame with the tall staff in his left hand.

The isiagu he wore was threadbare and of ancient design—the lion head patterns on it were bigger and the shirt was very long, almost reaching his shin.

The plenty room inside the dress showed how far Ichie’s body has reduced over the years.

His right hand swayed uncontrollably as he held out a big piece of cola nut in the air and began the prayers. Though his voice had lost the forceful tone required to say the prayers, he still said the lines as perfectly as always and the crowd chorused ‘isee!’ each time he finished a line.

After Ichie said the last line which was, “Egbe belu, ugo belu, nke si ibe ya ebena, ka nku kwaa ya—Let both the kite and the eagle perch and if anyone says the other will not perch, may its wings slough off”, he added, “Ogadi, it shall be well with all of us” and the crowd chorused a drawn-out ‘iseee!’

Ichie broke the cola nut and slipped a piece into his mouth before he dropped others back into the plate.

Igwe and some of the red-cap chiefs at the high table picked a piece each and threw into their mouths.

Arinze came and passed the tray of anyara round, and everyone in the canopy got a piece of the whitish, ovoid vegetable with the accompanying groundnut butter.

Ichie cut a piece from one of the roasted tubers in the tray and dipped it in the bowl of red oil.

Ichie threw another piece again and said, “Ka, let our ancestors eat” before he cut another and stuffed his mouth with it.

“We can now eat our new yam,” Ichie declared. He waved his hand in the air in a way that matched his words and sat.

The crowd roared, but I was busy watching Ichie chew; his lips twisted in circles like a goat chewing the cud.

It was obvious from the way he chewed that he had only a few teeth left. Each time his lips moved, they stretched the so many lines on his wrinkled face and his withered cheeks quivered.

Ichie did not attend this year’s festival, he’s become too weak.

Sometimes the Igwe invites a church priest too and asks him to pray after the ofo.

According to Igwe Mbachu, we all worship the same Chukwu and the “method we use to reach Him does not really matter.”

After the opening prayers, some youths will come and reduce the roasted tubers to thin pieces and distribute, but it rarely goes round the people sitting under the canopy so I’m not ever hopeful.

But with the chain of entertainments that follow shortly afterwards, nobody remembers food anymore.

Many kinds of masquerades—udo, ayolo, akpala, ata— each with its distinctive costume and features take over the ground.

The crowd cheer and throw money at them as they dance and chant the mbem.

The best dancers and those with the most artistic costumes, and also those very good with the mbem, get the most money.

But those were the small masquerades and once the big masquerades—onowaligwe, agaba, okwomma, otawalikpo, ijele— arrive, they must leave the ground for them.

Women would have to leave too or continue looking away because they must not behold them.

They are the real mmuo, spirits that emerge into the physical world from ant holes!

A pregnant woman may instantly miscarry at the sight of an agaba masquerade, whose face is a scary human-face mask painted solid black, with big hollow eyes and gaping mouth which expose two long and wide protruding teeth at the front.

“The masquerades have lost their true purpose,” Principal Ezeh said once.

“They have become soiled, anarchic and destructive!” he added.

“You must not go to see them again! Never!”

And he is right.

There are also dance performances during the Iwa Ji.

The rhythmic movement of egedege dancers always holds the crowd in great awe; their hips spun freely, as though they had ball bearings fitted into their joints.

My heart almost nearly jumps out of my chest each time an atilogwu dancer takes to the air, sometimes completing a full somersault in the air before landing on the shoulders of the next dancer.

Women groups also perform and Mama joins them at times.

Mama is a good dancer, only she tires easily. Women of her size easily do.

The Iwa ji festival is a spectacular event in Umunka, but the enjoyment always seems so short-lived.

It always ends at the square! 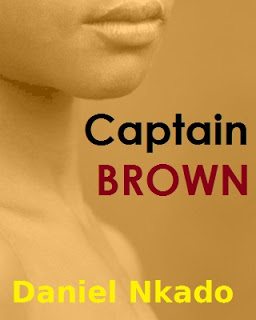 4 Comments on “The Festival of the New Yam”