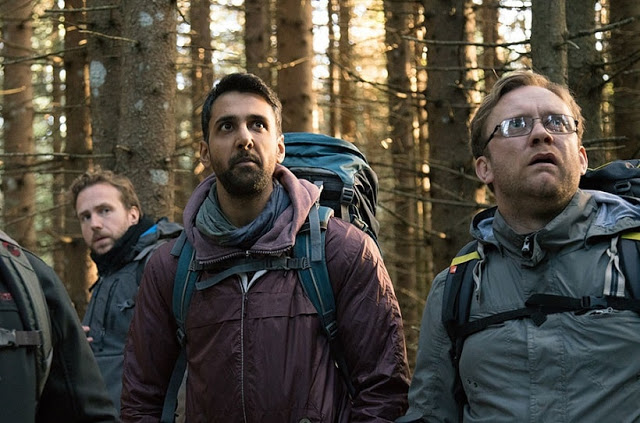 The past few months has brought out a host of Netflix original moves, including a number of horror entries ranging from the campy and fun (The Babysitter) to the totally unwatchable (Open House).

The Ritual is a British film shot in Sweden that gives off obvious Blair Witch vibes with its woodland setting and mysterious threat, though thanks to the lack of a “found footage” shooting style, it’s less nauseating than its famous predecessor.

The story follows four friends who decide to do something adventurous like hike a trail in the Swedish woods instead of going on a lads weekend to Amsterdam, or something more festive.


The trip comes six months after a fifth member of their group was killed in a liquor store robbery, an event which haunts lead character Luke who had dragged his friend into the store in the first place, and also failed to make a stand against the robbers which could have saved his life.

When one of the men twists his ankle, a decision is made to leave the trail and cut through the woods and…you might guess where this is going. The group encounters creepy runes, creepy noises, creepy dead animals, a creepy house with a creepy totem in it which causes them to have bed-wetting nightmares as they sleep there to take shelter from a brutal storm outside.

You’re never quite sure what the nature of the threat is throughout The Ritual. Large shapes move through the trees implying some sort of hulking monster, but there are signs of humans all over the place as well.

If that’s all enough to hook you, I’d say stop reading now. But I wanted to talk about the aspect of the film I liked the most, so that’s going to mean I have to dip into spoiler territory going forward.

That would be The Ritual’s creature design.

As it turns out, there are both lingering humans and a giant monster stalking the men. The humans are part of an ancient cult full of lost wanderers like them, the ones that were judged fit to serve rather than be executed outright. The main character, Luke, seems to have been given a pass as someone who has experienced “great pain,” and he’s marked with the badge of the follower, not the offering.

But the most impressive thing is the beast itself.


It’s described by the cult as “a god.

Ancient. One of the Jötunn.

A bastard offspring of Loki. We do not speak its name.” A Jötunn is general word for an ancient Nordic giant, though the filmmakers seem to have made their own original design here.

The thing is massive, a kind of giant elk but with two human bodies for a head, one of which holds up its antlers, the other a torso with arms and glowing eyes that grips people and skewers them on trees, after showing them their worst nightmares, of course.

The Jötunn is terrifying, there’s no getting around it, and it’s a rare example of a monster being fully revealed in a movie where it still works once it’s in full view. Many monster movies hide their monster as long as they can and as much as they can because the final reveal is usually a bit of a letdown, some long-limbed thing with a lot of teeth.

But The Ritual is a rare case where yes, the revealed monster is worth the wait, and doesn’t detract from the film in the least. It really is as scary as you imagine it to be from the glimpses the movie peppers throughout the movie leading up to the reveal.

As for how the film actually ends, I’m a bit less in love with it. It’s hard to end these kinds of movies in a satisfying way. You usually just have two options, the totally bleak ending where everyone dies (including a guy or girl who thinks they escape but is seemingly killed in the last frame of the movie), or you do have one person survive it all.

The Ritual allows Luke to escape. The point of his arc is that he has to step up and be brave not to a robber, but to an ancient demon-god-beast scarier than anything else on the planet. He does…decently well. He runs away a lot but gets in a few good licks including one shot across the face with an axe that at least seems to wound the beast for a half-second, allowing him to escape the woods where the beast will not follow.

Despite his survival and a lot of unanswered questions, this doesn’t really seem like a movie that’s going to get a sequel, but who knows with Netflix.

I will say this is 50 times better than Open House, the last Netflix horror film I saw, but compared to others in the genre, I’d say it’s relatively forgettable outside of the Jötunn itself. But if you like horror, sure, I’d give it a shot.

Paul Tassi is a contributor for the Forbes.

Follow him on Twitter and on Facebook, or pick up any of his sci-fi novel series, The Earthborn Trilogy, which is now in print, online and on audiobook.

One Comment on “Why you may enjoy watching Netflix’s horror movie, The Ritual”