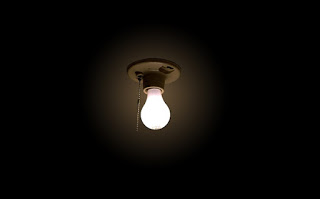 She thought she wouldn’t sleep, but she did.

She didn’t join the others to watch Super Story on NTA. Later, Ugochi knocked on her door to inform her a movie of Mr Ibu has started showing.

On the bed, all but her face was buried in her yellow kiri-kiri-star wrapper.

She told her younger sister that she wanted to sleep, needed to sleep.

Ugochi left and she turned to the wall and closed her eyes.

Their intermittent laughter jarred on her head.

She was tempted to unwrap herself and go out to the sitting room to see what was causing so much laughter, what Mr Ibu was doing on the screen, but she held herself.

She tried to think, imagine what he [Mr Ibu] was doing now. She got nothing at first, and then she saw a huge pot belly. Mr Ibu wore only white underpants, dancing round on the road while the children that gathered round him laughed loudly at him.

She saw herself among the children now, laughing out loud like them.

She was smiling on the bed, when suddenly the image of Obinna walked past the scene in her mind.

She turned to him. She was about running to him when he waved at her to stop. He didn’t talk. He only gesticulated with his index finger—turned it round in the air—in the way people do to mean they will be back shortly.

She nodded; she understood.

He would be back soon. He was only going to fetch something down the road and then he’d be back.

In a short time she was snoring gently on the bed.

The short arm of the round clock hanging on the wall opposite her bed has moved some points now.

She was now sprawled on the bed, one arm here, one leg there.

She wasn’t snoring, but her breathing was deep. She was dreaming.

She saw that he is back already.

Something had happened to their bus on the way and they had to turn back. He knocked on the front door.

She stood and walked to the door, but when she opened it, it wasn’t him. It was Ozoemena, the loutish boy that go about the village stealing and causing trouble.

Then suddenly it was him, Obinna. Her Obinna.

She wanted to touch him and suddenly it wasn’t him again. He was now Nze Ofili, her father’s friend with his large hairy nose. Excessive use of snuff has turned the nose hairs yellow-brown.

His faces alternated on and on till she crossed herself and began to cry.

Then he came and held her. The touch was his, she knew immediately.

She looked up; it was really him. He held her and murmured something into her ear, something she didn’t hear or understand.

But she felt calm under his grip now, a heavy feeling of peace settled on her.

But, suddenly, he was gone again. In the weird manner of dreams, he’d melted into smoke and drifted away.

She woke up; the bulb above shone a bright yellow in her eyes and she squeezed her eyelids.

She hadn’t prepared before sleeping. She hadn’t put on her flimsy night dress and applied talc to her neck.

She didn’t beat the bed with her wrapper to send out sand from the sheet before lying down.

It hit her again now, the new change to her life. To everything she was. Used to be. She feared she might never be herself again.

But then she remembered; he’d be back. He must. She has given him an ultimatum.

She shifted to the wall, reached up to the round switch and turned the nub up.

Sudden darkness fell over the room. She fumbled around for the pillow, clutched it tight and closed back her eyes.

He did not sleep.

So many thoughts kept him awake. The mosquitoes didn’t help issues, and so was the heat, and then Ahanna’s turbulent snores.

The room was dark. The burning candle on the table beside the bed was only able to cut out a small circle off the darkness.

He normally slept with the light on. Sometimes, his mother came in in the middle of the night to turn the light off, but only a short while and he’d wake up and turn it back on again.

Adaku had told him, once, that it was strange and he told her he liked it.

‘We will be sleeping in different rooms then,’ she told him, and he quickly grabbed her and said, ‘We will always turn the light off, inu?’

Now in Lagos, he prayed he’d ever see a glowing bulb again. Even if it is the murky ‘half-current’ glow.

Ahanna had told him when they came back from ‘short cut’ that they don’t normally expect electricity till past midnight, on Saturdays!

It was late at night when Ahanna finally told him they can now go out and do the short cut.

His tummy was threatening to burst. He’d been sitting all the while with his legs crossed, battling to hold down the cramps.

With relief, he followed Ahanna outside.

They walked down the road to the large central gutter with fast-flowing water.

Ahanna stepped on the edge of the ditch and pulled down his shorts.

He was watching him.

Ahanna crouched, his ass to the opening. Soon he gave out a low growl and he heard a thump in the moving water.

He tore a part of the newspaper he was holding and spread it on the ground.

He crouched and deposited his release.

Afterwards, he folded it carefully as one packaging food. But he was reluctant to throw it into the gutter.

What if the water didn’t carry it and people saw it in the morning?

They will open it and from the distinctive village smell, they will know that it is his.

‘Oga, I don go o,’ Ahanna said. ‘You wan chop am?’ He has wiped himself and pulled up his pants.

He eventually threw in the package and followed Ahanna.

He was not sure how to feel, learning that he’d be doing this every day, till the ‘soak-away’ is repaired.

He wished it was something he could do now, so that in the morning he would pull off his shirt, gather his tools and set to work. Like he did the morning after a huge wind blew away the roof of their kitchen.

Ahanna told him he should be grateful, that theirs was even better. Better than those living in places where gutters with fast-moving water was not found.

Later, he would learn how the women used small ‘penta’ buckets half-filled with water to do theirs. They did it in the bathroom and then poured it into the sewer through a small crack.

Because that somehow appeared more moral to him, he joined them and felt a little relief.

Now he opened the side pocket of his bag and brought out what Ada had given him. He rubbed the white package and brought it close to his chest.

Then he smelt it. Strangely, it smelt of her, her Joy flower perfume.

He tore it open slowly. She had used tape.

He saw a necklace and held it up in his hand.

The candlelight was dull, but he recognized the necklace.

It was from her grandmother, she’d told him. She never removed it. Not even when they were making love and it obstructed his mouth from getting to her nipples.

Once, he’d wanted to pull it off in the quiet, casual way clothing is removed during sex, but she’d held his hand and shook her head.

He stared at the necklace, and then straightened the paper.

He saw the pen marks on it and sub-consciously thought it was ‘I Love You’ like they often did when they exchanged paper bits in class at Community.

But now he managed to read the writing under the dim light.

And he read it again, and again. And again. ‘Bring It Back!’

At first he didn’t understand the ‘It’, what it referred to, and then he did. The necklace. She meant the necklace.

And she had added an exclamation mark at the end of the sentence to mean it was an order.

He drew in a deep breath.

He folded the necklace in his palm and breathed into it. The pleasant smell of her filled his nose.

He opened the hook and wore it over his neck.

In the morning Ahanna told him why he’d brought him to Lagos, why he’d chosen him among all the other young men that desired to follow him.

Why he’d chosen him even over his own cousin, Uche.

17 Comments on “Something Bigger Than Love – 6”