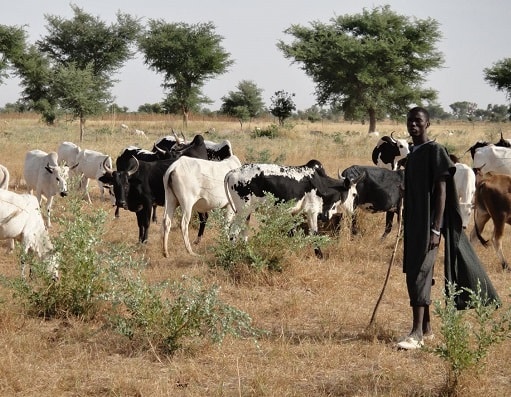 Adamu loved his cows; they were all he lived for.

He had about fifty of them and enjoyed every bit of rearing them.

The cows were all his late father left for him at death.

When he was alive, Adamu’s father was a well-known cattle rearer in Bauchi and he made sure he taught Adamu how to rear and sell cows.

On this particular day, the Bauchi sun was hot as usual.

Adamu was counting his cows and he made a shocking discovery. He found out that the cows were forty-nine in number instead of fifty.

One cow has gone missing.

He counted them again to be very sure he hadn’t made a mistake and he still obtained the same result: one cow was really missing!

Adamu was confused. ‘Wallahi, one cow is missing,’ he muttered to himself.

Adamu’s confusion soon turned into sadness as he blamed himself for not being careful enough.

He wasn’t as good as his father, after all.

He started counting the cows again as if the repeated counting would somehow magically change forty-nine back to fifty.

Halfway, he stopped and said to himself, ‘Insha’Allah, I will find my missing cow. If someone had stolen it, I will catch the person and the person will pay for it.’

Just then, he heard footsteps and he turned back.

The frown on his face suddenly turned into a smile.

Ifeoma in her beauty was walking up to him, her steps the delicate winding of a cat.

Adamu considered her the most beautiful corps member Bauchi has ever had.

The first time he’d seen her, he’d turned to stare for long and when Ifeoma smiled and greeted him, he concluded in his mind that he was going to marry an Igbo woman.

That is if they accepted cows for dowries.

Ifeoma was standing in front of him now and he was already feeling awkward, as usual.

‘Afternoon, Adamu, how are you?’ Ifeoma had smiles on her face.

‘Was just wandering about and looking at nature, hope you don’t mind?’

‘How are your cows?’

‘They fine, it just I find out one is missing.’

Ifeoma looked at the ground and noticed marks left by cow hooves. The hoof marks moved in a particular direction away from the field.

Adamu looked and saw them.

‘They moved away from the field. I believe if we trail them, they might lead us to the missing cow.’

The marks led them out of the field through a narrow footpath. It continued
from the path to the central dirt road and then across it to a building.

Unusually, the gate of the lodge was open.

Ifeoma was surprised and confused, because it only was just break-time.

Usually, corpers bolted the gate from inside before leaving for school.

They walked into the compound and Ifeoma noticed that no corps member
was around, and yet the gate was open.

Obviously, none of her colleagues had returned.

The hoof marks inside the lodge compound led straight to a door.

Ifeoma was now flabbergasted because that door was hers.

And it was open, with the padlock on the ground.

She entered her room, and Adamu followed her in.

At the centre of the room sat a big silver basin.

It contained different cow parts, fresh and surrounded by blood.

There were blood stains on the wall and on the floor as well.

‘What is this basin doing in my room?’ Ifeoma was now more scared than confused. ‘How did it get in here?’

‘You mean this is your room?’ Adamu asked.

‘Yes, this is my room, but I don’t know how this basin got into my room.’

‘Kai! Corfer, you should be able to explain this!’

‘Wallahi, Corfer, you are a liar and a thief! You stole my cow and killed it!’

Like Adamu, none of the people that gathered believed Ifeoma.

‘You are a thief!’ they chorused and started beating her.

They hit her with sticks, threw stones at her and tore her top,
leaving her only in her bra and pant.

She was bleeding all over but they did not stop.

A police car swung into the corper’s lodge.

Three officers came down followed by a tall, slim woman.

‘Stop it! Leave the girl!’ Sergeant Hassan shouted to the people who were beating Ifeoma.

Finally they obeyed and stopped.

‘Uncle, wallahi, she stole my cow and killed it,’ Adamu said.

‘No, Adamu, she didn’t steal your cow,’ Hassan said. ‘The cow thief is Yero, someone had seen him take the cow and reported to us.’

All eyes turned to Yero in the crowd. He was holding the thickest stick.

Yero was a teacher at the school where Ifeoma was posted.

He was Adamu’s friend.

He had asked Ifeoma out on several occasions, but she’d declined.

‘Arrest him!’ Sergeant Hassan ordered the other police officers.

Yero threw away his stick and made to run.

He was caught, but Ifeoma did not get up again.

18 Comments on “Short Story: If Cows Could Talk…”