Who is Kenneth Okonkwo?

Kenneth Okonkwo is famous for his role as “Andy” in the 1992 classic movie, “Living in Bondage”. Kenneth Okonkwo was born on the 6th of November, 1968, and he is 52 years old currently. He is a Christian and he openly talks about his faith.

Kenneth Okonkwo is an avid learner and he holds multiple degrees across various fields. First, Kenneth graduated with a BSc degree in Business Administration from the University of Nigeria, Nsukka.

He later went back and obtained a law degree (LLB) from the same university. Kenneth also later acquired a Master’s degree in International Law and Diplomacy from the same University of Nigeria, Nsukka (UNN).

In addition, Kenneth Okonkwo bagged a PhD degree in Economics from the Chartered Institute of Economics. He also mentioned that he is duly learned in the field of Theology.

Kenneth Okonkwo’s acting career has spanned over three decades. He has featured in over 300 movies, some of which include: “Ripples”, “My Decision”, “666”, “The Devil in Her”, “Living in Bondage”, and “Rich Families”.

Before his second marriage, Nollywood actor Kenneth Okonkwo was previously married to Ogechi Ezekiel, the daughter of the General Overseer of Christian Pentecostal Mission Intl. They tied the knot in 2000 but got divorced two years later over some undisclosed issues. Their divorce came as a shock to many mostly because of the reputation of both parties.

Kenneth Okonkwo met and married his second and present wife, Ifeoma Okonkwo, in 2007. According to Kenneth, he met Ifeoma through his mother.

Okonkwo’s mother had felt Ifeoma was good for her son, and she hooked them up. Kenneth and Ifeoma met and eventually ended up getting married.

Kenneth Okonkwo and his second wife have been together for around 14 years now and he still maintains that his mother made the best decision, and that he has no regrets marrying Ifeoma.

Not much is known about Kenneth Okonkwo’s current wife, Ifeoma Okonkwo, except that she is a polite, loving, and caring wife.

Pictures of her with her husband are on the internet, but her personal life and career have not been mentioned. It is however known that Ifeoma Okonkwo was born on the 22nd of April, and she is the mother to Kenneth Okonkwo’s second son.

Kenneth Okonkwo’s second son is Chukwuchirimeze Okonkwo. He was born on the 4th of May, 2016, and he is 5 years old currently. Chukwuchirimeze’s birth was celebrated as a miracle because Kenneth and Ifeoma waited nine years after their marriage before he was born. 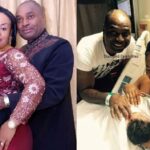 Reactions as BBNaija Khalid and Daniella have s3x on camera – VIDEO