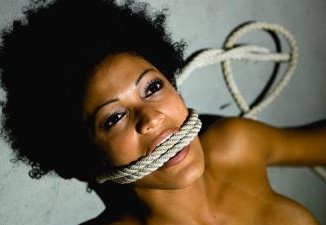 Anna fled her village in May.

The 50-year-old woman said when South Sudanese soldiers arrived in her village, they treated her family and neighbours “like animals”.

They killed her husband when he was trying to protect their cattle, shot her six-year-old stepson in his bed and gang-raped her and her daughter!

When asked if she tried to plead with the soldiers to show some humanity she said: “If you opened your mouth, they would kill you.”

She told Aljazeera how she spent five days at the mercy of soldiers thinking, “There was no God if something like this could happen,” but telling her six children that “they would be safe again when they arrived at the UN Mission in South Sudan”.

She said before the soldiers left her village, they burned her home, making sure to also burn the family’s supply of sorghum.

Then, what was left of Anna’s family began their almost week long walk to safety at the displacement camp in Bentiu.

But arriving at the camp doesn’t mean an end to the violence for everyone – certainly not for Mary, a 24-year-old woman who hoped to become a doctor, before war forced her to take her two small children to the displacement camp.

She hasn’t seen her husband since she left home.

If he’s alive and she reunites with him, she said she’d tell him that she was raped, because he needs to know.

But she said she would understand if he decides to leave her after learning of her rape.

Like many women in the camp, Mary would walk into the bush to collect firewood to sell.

She said one day she and a group of women were gang-raped at gunpoint by South Sudanese soldiers.

When asked why she thought the men hadn’t killed her yet, she said:

Anna and Mary’s stories are not unique in the camp.