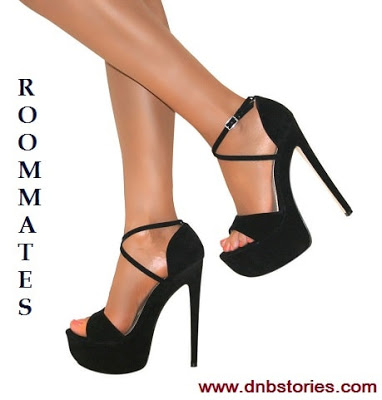 
April sounded excited, appearing to babble. ‘Hi, dear. So happy you called. Almost about calling you before I saw your call. How are you, and how are you finding your new job?’


‘I’m so sorry,’ April said. ‘I know you are still very angry with me but please…’


‘I woke up a few hours ago and seemed to have lost my mind.’


‘My head, my memory, everything seem muddled.’


‘How am I supposed to know if I can’t remember things?’


‘You are not remembering things?’


‘I said my memory has gone sketchy!’


‘In a house. The woman who supposedly owned the house said I am a maid.’


‘Well the last time you spoke with Loveth you mentioned you now work with one big telecom boss, so where did being a maid come from now?’


‘Telecom boss? Babe I’m telling you that I just came out of the kitchen and you are saying telecom boss.’


‘Calm down, get dressed and come to the house so that we can understand what you are saying.’


‘Where were you staying before you moved out?’ April asked.


‘If you have a house, then why the hell did I move out?’


‘We had a small quarrel and you got upset.’


‘How can I locate your house?’


‘I told you. I can’t remember anything!’


‘Okay, okay, I will text you the address right now.’


Loveth came out of the kitchen then. ‘Who is that?’ she asked.


April picked some chin-chin from the bowl Loveth was carrying. ‘Georgina called.’


‘Wow, what did she say?’ Loveth said. She sat down and dropped the bowl on the table at the centre.


‘She was sounding strange.’


‘Strange? What do you mean by strange?’


Gripping the door handle, Gloria’s voice startled Georgina. ‘And where are you off to?’


‘And how come you remembered that?’ Gloria asked Georgina.


‘I mean, I thought something happened to your head?’


Gloria pulled back in shock. Though she quickly collected herself, Georgina had sensed something.


She stared at the woman.


‘Why would you ask me that?’ Gloria asked.


‘Well, you take fifteen minutes and then you are back here immediately, understood?’


Georgina walked out and closed back the door. Outside, she turned to stare at the Victorian front door. Things were already starting to trickle in, she could feel it now.


She cast down a long breath and walked away.


As soon as Loveth heard Georgina’s knock, she sprang up from her seat and ran to the door like a little girl whose mother just returned from the market.


April watched as the two hugged, amidst a slight draft of harmless jealousy.


Georgina pulled away from Loveth and then pinched her cheeks. ‘See how chubby your cheeks are!’


Loveth hissed. ‘Oh please! What else is there in this house if not a load of junk?’


April gave Georgina a side hug. ‘What were you saying over the phone?’


Seriousness came over Georgina. ‘April, I don’t have all the time. I need you to quickly run me through everything that happened to me before now.’


‘I don’t have all the time, please start now, will you?’


The three ladies walked across the room and sat.


Back in the house, a suspicious-looking Gloria picked her phone and sent off a number.


A few moments and she said into the phone: ‘Hi, Segun.’


There was a pause.


‘You said she is going to wake up cracked as hell with no prior knowledge of anything, but instead of giving me a reason to call security she is remembering things.’


‘She’s been mentioning some names and now she just called your name too.’


‘She called your name, I am sure. That means she remembered.’


‘Well, I really hope that. And you better start thinking of plan B because I’m turning scared!’


Upstairs, in the same building, Gloria’s husband crept out his room.


He wore just his boxers, his well chiselled chest exposed.


He walked down the corridor and stopped in front of the door that opened to Georgina’s room.


Gripping the door handle, he pushed the door a tiny crack apart and slipped into the room.


He checked the bathroom.


Leaving, he caught the glimpse of something on a corner of the bed.


He walked across the bed and picked the red pair of panties.


They belonged to Georgina.


He sniffled the fabric and then put it in his pocket.


‘Yes I remember all those,’ Georgina answered. ‘But how did we all get here?’


‘Graduation?’ April said. ‘You remember our graduation too, right?’


‘Okay, good,’ April said. ‘We had a minor accident in your boyfriend’s car as we were going home after our graduation, do you have any recollection of that?’


‘Yes, yes, start from there! That accident.’


‘Well, it was nothing serious. Except Loveth passing out, there was nothing else about it.’


April and Georgina looked at her, both sighing in resignation.


‘He is fine; he visited only some days before our quarrel and you moved out.’


‘What about Youth Service?’ April continued.


‘Yes,’ April said. ‘Do you remember anything about Youth Service at all?’


‘Well, we finished NYSC three years ago,’ April said. ‘I got a job first.’


‘Before your job? Where was NYSC?’


‘You served in Osun State. Loveth and I Abuja.’


‘When did we move to Lagos then?’


‘Immediately after Service. We tried locating Rachel, but couldn’t. You should remember all these things now! We slept in one church at Ikeja for the night before I finally called a friend of my mum the next morning. We stayed in her place for about three months. We moved out when I got a job.’


‘How did we quarrel?’ Georgina asked.


‘It wasn’t anything serious. Just some stupid girls’ argument.’


‘Can you be more specific?’ Georgina said.


‘Some useless argument about religion and feminism.’


‘You threw me out because of feminism?’


‘I didn’t throw you out! You got upset and started packing your things.’


Loveth coughed then. ‘Actually, April, there is more.’


‘More what?’ Georgina turned to her immediately. ‘Tell me.’


‘April, you asked her to go when she repeated a certain statement that got you upset,’ Loveth said.


‘Shut up, that has got nothing to do with anything!’ April said.


‘Don’t tell her to shut up in my presence!’ Georgina said. She turned back to Loveth. ‘Love dear, tell me what you know.’


‘You said something about the guy April was seeing and she got mad,’ Loveth said.


April pursed her lips in a frown.


‘Who is this boyfriend you chose over me?’ Georgina asked.


Finally, she turned back to April. ‘April, can I see a picture of this your boyfriend?’


‘Sure,’ April said, ‘but please don’t ever refer to that fool as my boyfriend!’


‘You have his pictures on your phone?’ Georgina asked.


April gave a defensive look. ‘He is an ex. Every girl keeps a picture or two of her ex.’


Georgina was staring at her with a look.


‘Even under her pillow, right?’ Loveth muttered.


April shot her a mean frown. ‘I warned you to stop going through my things.’ She showed Georgina the phone.


Georgina collected the phone from her and looked. Then, all of a sudden, a flush of warmth hit her.


And seconds after, a revealing coolness followed.


Slowly, a mischievous smile covered up of Georgina’s face. ‘I think I remember everything now,’ Georgina said, rising.


‘Are you sure?’ April said. ‘Because I’m considering driving you to the clinic after work tomorrow.’


Georgina hissed. ‘Like I couldn’t have found my way to Yaba Left before deciding to call you abi? I caught your stupid boyfriend in bed with the woman I work for. They obviously conspired and did something to my head.’


Loveth’s eyes popped. ‘Segun was sleeping with your boss too?’


‘Actually five,’ April corrected her, ‘if you include the lady in my office too.’


Georgina checked her own phone. ‘Babes, I have to go now. My madam gave me just 15 minutes.’


‘Wait, you are going back to that house?’ April asked.


‘Of course,’ Georgina said. ‘I have a task to complete. She even dared to use the name of my late sister in conning me.’


‘Who is this woman?’ Loveth asked. ‘The time we spoke, you told me a big man working with FTN Network had hired you to become his CCO.’


April turned to Loveth. ‘CCO? What does that mean?’


Loveth shrugged in incomprehension. ‘Don’t know, that’s exactly what she told me.’


The girls’ eyes ran to her.


‘It’s a term I coined to deceive Loveth with.’


‘So you were really just working as a maid?’ April said.


‘A maid, yes, but one soon to be worth millions of naira!’


‘How?’ Loveth and April chorused.


‘Don’t worry, you guys will hear the full story in time.’


At the gate, while they saw Georgina off, Loveth’s phone started to vibrate and ring.


The girls halted while she stepped aside to take the call.


‘Yes, this is Loveth,’ Loveth said into the phone.


There was a pause.


‘Alright, Sir, I’ll be there tomorrow. Thank you very much!’


The call over, Loveth turned to the girls, excited.


‘The man from the company I submitted my CV to last week.’


‘He asked if I could come tomorrow for an interview.’


Georgina stepped closer. ‘What is the name of the company?’


Loveth’s head bobbed in a nod.


‘Yes.’ Loveth nodded again. Then in a somewhat confused face she added: ‘The man asked if I am proficient in any picture editing software.’


‘And what did you answer?’ Georgina asked.


‘He then asked if I know Adaobi’s Photo shop, biko, do any of you know the Adaobi he is talking about?’


April and Georgina turned to each other with bulged eyes.

Next on Roommates: The Confrontation