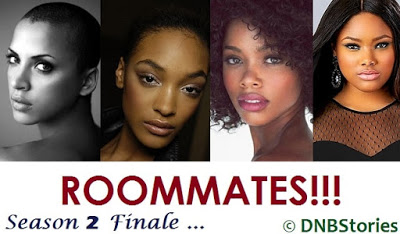 A bruised and swollen-eyed Gift stared back at her.

A frown covered April’s face. ‘What are you doing here?’ she asked.

‘April, please, I have something to tell you.’


‘Get out!’ April held the door to push it closed.


April halted. ‘What about Harry?’


Now April left the door open and Gift walked into the room.


Georgina turned to her with glaring eyes. Gift ignored her glare and started:


‘Harry won’t take my call,’ she said. ‘Please, you must contact him right away. He needs to leave town as soon as possible.’


‘Why do you think Harry might be in danger?’ April asked.


She turned and walked out.


April picked her phone to dial Harry’s line again. The call returned unavailable still. She tried a few times more and it was still the same response.


‘Yes,’ Rachel agreed. ‘I will go with you, but right now we need to think up something.’


Rachel turned to Georgina. ‘You said Josh walked in on you while you were searching through the drawer?’


‘Then we no longer have time. Josh is wily as a cat and obviously he is now suspicious.’


‘So what do we do?’ Georgina asked. ‘I haven’t gotten anything yet.’


‘You can’t stay in that house any more than another day.’


Rachel sighed. ‘You can get him to confess.’


‘How?’ Georgina this time.


‘On tape. Walk in on him without your wig.’


‘Yes,’ Rachel said. ‘In his shaken state, he will be vulnerable. Order him to speak. Ask him questions.’


April’s eyes came wide at Rachel. ‘Rachel, you can’t be serious! Are you telling her to confront him?’


‘He won’t harm her if he is too scared for his life,’ Rachel said. ‘I’ve seen the bald episode happen once, it renders him off. Completely.’


‘April, you’ve been trying his line all day,’ Rachel said. ‘We have to do this on our own.’


She turned to Georgina. ‘I will give you one of my phones. The recorder is very efficient. April and I will be outside the gate, waiting. If there is anything, make us know immediately.’


‘I think I have an idea that might help too,’ Georgina said.


They came closer to her and she told them.


‘But there is no where we can get a sleeping pill,’ Rachel said.


‘There is a chemist just outside the lodge gate,’ Georgina said.


‘Much as I know, those things are not sold over the counter,’ Rachel said.


‘Actually, some are,’ April said.


They turned their eyes to her.


Georgina and Rachel turned to each other with a smile.


Afterwards, April walked downstairs to get the drug.


When she came back up, she replaced Georgina’s make-up and she wore back her wig.


Josh was in the sitting room when Georgina walked in. She greeted him and walked past, heading to the kitchen.


‘You know,’ Josh was saying, ‘Martha usually spent less than half an hour to get to the market and back.’


Georgina stopped and turned back to him. ‘I sorry, I not see Cameroun pepper on time.’


About 25 minutes later, the jollof rice was done.


She had tried her best to create something red and appealing, but the rice still came out a disappointment.


It sat caked in the pot, one side of it white and the other very red.


She frowned and let out a tiny hiss.


From the cabinet above her head, she picked a wooden ladle and mashed the whole rice together.


Thereafter she brought out the drug envelope from the pocket of the tight shorts she was wearing under her brown skirt.


April had told her to add just four tablets, but she crushed all the eight blue tablets into the pot.


With the ladle she turned the rice again. She made to taste it again, but quickly collected herself.


She dished out the mashed rice in three plates and placed a roast chicken part beside each mound.


She dropped Josh’s plate first on the dining table and then carried the other two plates down on a tray.


Kester collected his plate hurriedly, smiling away in gratitude.


He opened the plate and the smiles quickly disappeared. ‘What is this?’ he asked.


Kester’s lips remained open without bringing out another sound.


Georgina walked past him to the gate to give the gate man his own plate.


Back up, Josh turned to her from the dining table. ‘So what do we call this?’ he asked.


‘Exactly, sir!’ Georgina said. ‘Pudding jollof rice. I eat mine in the kitchen.’ She walked away.


As soon as she left, Josh stood and carried the plate into the bathroom. He opened the toilet bowl, poured everything in and flushed.


He returned to the dining table and dropped the empty plate.


Some minutes passed and he stood and walked downstairs.


Kester was sprawled inside one of the cars, snoring heavily from drug-induced sleep.


Josh smiled. ‘At least it wasn’t poison,’ he muttered to himself.


Back up, he walked to the couch and spread himself on it in false sleep.


Georgina came out, saw him and smiled.


She ran to the room and tried to open it. It was locked.


Back in the sitting room, she saw the keys on the glass table.


She ran to pick it. Bending to pick it, Josh grabbed her hand.


At the edge of the road, Anthony stopped the car and asked Loveth to get down.


‘Won’t your mistress be mad that you allowed me to go?’ Loveth asked him.


Loveth nodded and opened the door.


She came down from the car and said, ‘Thanks’, waving.


Anthony nodded, started the engine and drove off.


Loveth smoothed back her hair and then turned to look over herself.


She adjusted her skirt and walked off.


Turning into the road that led to their lodge, she saw Harry driving in in his new car.


She waved at him and Harry stopped.


She walked to the other side of the car and entered.


‘Good afternoon,’ she said to Harry.


‘April told me you travelled home with your parents from the hospital, so where are you coming from?’


‘Believe me, you don’t want to know,’ Loveth told him.


Harry gave her a look and then depressed his cheeks.


He started the car.


When they arrived the lodge, April and Rachel were not inside the room.


‘Stay inside, lock the door and never open it for anybody,’ Harry told Loveth.


Loveth frowned at him. ‘Why?’


‘Just stay inside, I’ll go look for your friends.’


‘Nothing. Just stay in while I go look for your friends.’


‘Is April and Georgina in danger?’


‘No,’ Loveth said. ‘The last time I was here in this room, locked up while my friend got raped so I’ll go with you.’


Harry was staring at her.


Loveth sighed. ‘Sorry, I shouldn’t have told you that.’


Loveth nodded and stepped out of the room.


Harry resigned to a sigh and followed her.


He stood aside while Loveth locked the door.


As they were driving out to the road, the Mitsubishi canter truck that had been waiting for Harry since started and sped into the path, crashing into them.


The men in the truck rushed down and ran to the crumpled car to check to be sure they had done a nice job.


It appeared they had.


There was a lot of blood and neither Loveth nor Harry was moving.


One of the men opened the jerry can they were carrying and sprinkled the petrol while the other flicked the lighter on.


Josh rose from the couch while still gripping Georgina. ‘Who are you?’ he asked her.


Georgina said nothing to him.


He struck the back of his palm across her face and Georgina fell away with a groan.


He came back to her and grabbed her at the neck. Holding her that way, he pushed her to the wall behind the dining table.


Georgina struggled to breathe and free herself.


‘Who sent you here?’ Josh asked her.


Georgina felt her throat dry up from lack of air. She struggled on, but Josh’s grip was too firm.


‘Speak!’ he commanded her.


Georgina started to feel woozy. With all the strength she could muster, she raised her knee and sent it into Josh’s groin.


He groaned and released her.


Josh was coming to her again. She tried to wriggle away from him, but he grabbed her by the legs.


He pulled her through the floor, sending her head into one of the legs of the dining table.


Georgina cried out in pain.


Josh grabbed her by the collar to pull her up. Georgina drew in a long stretch of air and thrust toward him, sending his head to the wall.


Georgina staggered to her feet. From her pocket, she removed the phone. She turned the recorder on and dropped it on the dining table.


Then she pulled her wig off and turned to Josh.


On the floor, Josh drew back in fear. ‘It is you,’ he muttered from the depth of his throat. ‘You are the bald lady.’


Georgina did not understand. ‘Why did you rape my friend?’ she asked him.


Josh cast wide eyes at her, saying nothing.


Georgina started toward him. ‘Answer me!’ The more she came close, the more Josh drew back. ‘Why?!’


‘Answer me!’ Georgina yelled at him again.


Josh’s chest rose and fell, and then his eyes settled back in. ‘I’m no longer afraid of you,’ he said to Georgina. He drew in a great noisy breath and clenched his teeth tight, looking at Georgina with hooded eyes.


Georgina drew back in fear.


He rose and lurched forward to her. Both of them crashed to the floor.


Josh grabbed Georgina and sent her arms to the back. ‘I’m no longer afraid of you,’ he said.


He pulled Georgina up and slammed her face down on the table.


He picked the serrated bread knife. ‘Now I’m going to do to you exactly what you did to me,’ he said.


Josh held her down to the table and with the knife tore off her blouse.


Below, Georgina spread her legs and sent Josh’s legs apart.


His grip on her slipped off.


Georgina took the carved wood flower vase at the centre of the table to hit him, but Josh grabbed her hand in the air.


He butted her hard and Georgina fell away to the table. Dishes and glass fell from the table and shattered on the floor.


Georgina squirmed in pain, gripping the edge of the table.


Josh sighed and spat. He cleared the sweat on his forehead with his palm and bent to grab Georgina again.


Georgina took hold of the china teapot and crashed it into his head.


He slumped to the floor.


Georgina wriggled up, panting. There were bruises all over her face.


She picked the phone and called April and Rachel.


‘He is unconscious on the floor,’ she told them.


April and Rachel quickly opened the gate and entered. Inside the compound, they took off their wigs and made their way straight into the house.


Georgina dropped the phone and turned to the ground where Josh was lying before.


She didn’t see him.


Behind her, Josh slammed her head into the wall.


April and Rachel opened the door and froze.


It was Georgina that was on the ground, Josh standing beside her.


He stared at them with bloodshot eyes.


Then he picked the bread knife and made his way to them.


He stabbed Rachel first, straight into the belly, and then turned to April.


Watch out for Roommates Season 3!