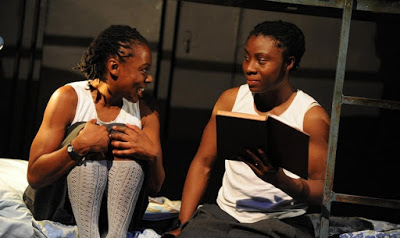 I think we can all agree that twins are scary and weird.

At least that is what horror movies like THE SHINING and DEAD RINGERS have once depicted. But one of the most truly bizarre cases of weird twins has to be that of the Gibbons girls.

June and Jennifer Gibbons were born on April 11, 1963 in Barbados, and moved to a small town in Wales soon after.

The girls refused to speak to anyone. They only spoke to each other, and sometimes their younger sister, Rose, in a made-up “twin” language.

A psychologist once secretly recorded the girls talking, and discovered that they were speaking regular English at incredible speed. Living in a predominantly white town, the girls were frequently bullied, to the point where school administrators let them leave early to avoid torment.

It didn’t work, and the girls eventually withdrew from school, and society.

In an attempt to socialize them, June and Jennifer were sent to separate boarding schools.

They became catatonic and were again reunited with one another.

The girls soon turned to writing, both fiction and keeping extensive diaries.

Their self-published novels were often filled with explosive violence and did not gain them any attention in the literary world.

Instead, they turned to petty crime for excitement and attention.

They were caught burning a building to the ground.

In 1982, the judge sentenced them on sixteen counts of burglary and arson to Broadmoor Hospital, a high-security hospital for the criminally insane.

Their refusal to speak, anti-social behavior, zombie-like movements, and extreme unity all contributed to the decision to have them hospitalized — Broadmoor was home to many notorious killers, including gangster twin brothers Ronnie Kray and English serial killer who was dubbed the “Yorkshire Ripper” after being convicted of murdering thirteen women and attempting to murder seven others.

While at Broadmoor, the girls were kept in separate wards but spent all of their social time together. Nurses often found them in their separate rooms, sitting in the same poses.

On several occasions, the girls attempted suicide and attacked one another; they often took turns eating (one day one would eat while the other would abstain); and they were put on heavy anti-psychotic drugs that drained their desire to write.

They eventually returned to their diaries, but did not write any more novels.

June and Jennifer had a strange, unhealthy co-dependent relationship.

Jennifer, ten minutes younger, thought June was better looking and more intelligent than she was.

June sensed this, and wrote in her diary:

“She wants us to be equal. There is a murderous gleam in her eye. Dear lord, I am scared of her. She is not normal… someone is driving her insane. It is me.”

She described Jennifer as “the dark sister robbing me of sunlight.”

In her own journal, Jennifer wrote:

“We have become fatal enemies in each other’s eyes. We feel the irritating deadly rays come out of our bodies, stinging each other’s skin. I say to myself, can I get rid of my own shadow, impossible or not possible?

Journalist Marjorie Wallace, who wrote an extensive biography on the girls, was having tea with the twins when Jennifer said she was going to have to die.

When asked why, she responded, “Because we decided.”

It would not be enough to live separately; they would always possess one another. One of them had to die so the other could live a normal life.

In 1993, the girls were finally granted a transfer to the more open Caswell Clinic.

Upon arrival there, Jennifer looked ill.

She was rushed to the hospital and pronounced dead of acute myocarditis, a sudden, lethal inflammation of the heart.

This is mostly caused by a viral infection, drugs, or poison; but no evidence of any of this was found in Jennifer’s case.

The cause of her myocarditis was never identified.

Wallace said that, after her sister’s death, June was both grief-stricken and relieved.

“We were war-weary. It had been a long battle — someone had to break the vicious circle.”

On a visit a few days later, Wallace recounted that June “was in a strange mood”.

She said, “I’m free at last, liberated, and at last Jennifer has given up her life for me.”

After Jennifer’s death, June gave interviews with Harper’s Bazaar and The Guardian.

June now lives a so-called “normal” life. She speaks normally, lives independently, and looks to put the past behind her.

By 2008 she was living quietly and independently, near her parents in West Wales.

She was no longer monitored by psychiatric services, was accepted by her community, and sought to put the past behind her.

Alyse Wax is the author of Curious Goods: Behind the Scenes of ‘Friday the 13th.

7 Comments on “The strange story of “The Silent Twins””